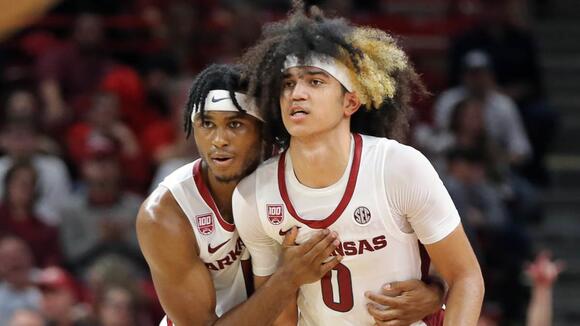 What: This will be the second all-time meeting between Arkansas and UNC-Greensboro.

FAYETTEVILLE, Ark. — Ricky Council IV might be exceeding a lot of expectations at Arkansas.

"He's had a phenomenal start to the season, without a question," Razorbacks coach Eric Musselman said at his press conference previewing Tuesday's night matchup with North Carolina-Greensboro.

Council's backboard-shaking dunks get a lot of the attention, but he's also knocking down three-pointers. He's averaged over 20 points a game against Troy and San Jose State.

On Monday he was named the top player of the week in the SEC.

"He's done a great job of attacking both in the half-court and in transition," Musselman said. "He has the ability to make three-point shots."

Plus he's playing defense and has improved other aspects of his game.

"He's further ahead maybe than what we thought at this juncture of the season of being really good in ball screens and handling in pick-and-rolls," Musselman said. "A couple of the games in Maui, one of them he was used as a ball handler in pick-and-roll and another game we tried to (isolate) him on the elbow."

Council and the Hogs may have lots of chances against UNC-Greensboro on Tuesday night. They aren't very good and he grew up about an hour away.

• Council grew up an hour from Greensboro and his sister, Rhianna, played two seasons of basketball at St. Bonaventure before playing her final two seasons (2019-21) at UNCG.

• Council was named the SEC Player of the Week after averaging 22.0 points, 3.0 rebounds and 2.0 steals while shooting 70 percent from the field in wins over Troy and San Jose State. He is the SEC leader in scoring (19.8 points per game) and minutes played (35:41 avg.).

• Arkansas’ next two games will be away from Bud Walton Arena but the Razorbacks will be considered the home team. First, on Dec. 10: Arkansas will play in the second annual Crimson and Cardinal Classic versus Oklahoma at Tulsa’s BOK Center. Second, on Dec. 17, Arkansas will make its annual trip to North Little Rock to host Bradley.

South Carolina's Josh Gray did everything needed to upset Arkansas, but a Razorback freshman made a senior move
FAYETTEVILLE, AR・6 HOURS AGO
All Hogs

What delayed and potentially shifting college landscape could mean for Razorbacks
FAYETTEVILLE, AR・1 DAY AGO
All Hogs