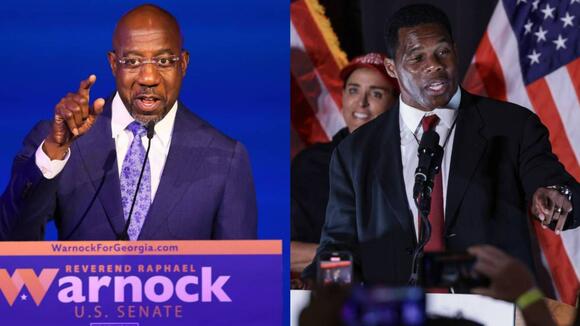 ATLANTA — There are reports that former President Donald Trump will hold a tele-rally for Republican candidate Herschel Walker on Monday tonight, as Walker tried to encourage his base to go to the polls.

The Walker campaign, however, has not confirmed this.

Warnock made a campaign stop at the Georgia Tech campus as he tried to rally students to vote and take others with them.

Georgia has seen huge early voting numbers. After his rally, Warnock tells Channel 2 Action News he’s worried that some of his supporters won’t go to the polls.

“Here’s what I worry about. I worry that we will see this massive early voting turnout, and some will decide that we don’t need your vote. We do,” Warnock said.

Walker made a campaign swing through north Georgia, including a stop in Ellijay.

“I love you all, and we’re going to win this election and get Georgia back together because we together can make anything happen. We can win championships,” Walker said.

At the rally in Flowery Branch, Walker told Channel 2 Action News the key to his success was voter turnout.

“I feel pretty good about tomorrow. That’s what we’re working on. Turnout, turnout, turnout. So, trying to get the people out to turn out the vote,” Walker said.

There are unconfirmed reports that former president Donald trump will tele-rally for Walker during one of his campaign’s stops — something that many within the GOP hoped wouldn’t happen.

Back at the Georgia Tech campus, Warnock reminded reporters that Trump had recruited Walker for the race.

“Whether he comes or not, we know he is Donald Trump’s handpicked candidate,” Warnock said.

The last time the vice president was in Atlanta, she traveled with President Joe Biden in Jan. 2022 to discuss voting rights.
ATLANTA, GA・11 HOURS AGO
WSB Radio

A group of 20 Republican attorneys general has sent letters to CVS and Walgreens warning the drugstore chains against mailing abortion pills to patients.
MISSOURI STATE・2 DAYS AGO
WSB Radio

Recently, the farmers who are helping with this important Georgia export got a major win.
GEORGIA STATE・8 HOURS AGO