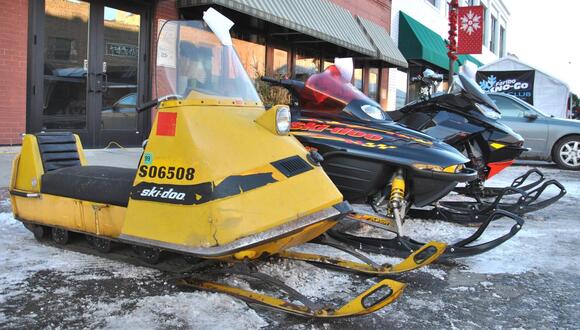 Strolling down Central Avenue on Saturday afternoon, folks may have noticed some nostalgic designs that brought them back to the infamous movies set on the slopes in the ‘80s. But rather than strapping on clunky ski boots, members of the Faribo Snow-Go Club start their engines to shred some cheese.

The family was one of many who brought their vintage snowmobiles out for the Faribo Sno-Go Sleds on Central Vintage Snowmobile Show on Saturday. For snowmobilers, it’s not unusual to brave the freezing weather to show off their collection.

Among those attending the event was John Little of Medford. He took up snowmobile collecting as a post-retirement hobby.

Little said snowmobiling was once less comfortable than it is nowadays.

“The old ones were pretty tough riding, because we didn’t have a trail like they do now,” he said. “They did about 60, 70 miles an hour.”

He said he travels to various snowmobile shows and, while there’s usually no prize money to be won, he goes for the community.

“We travel around a lot, mostly statewide, sometimes in Wisconsin, but nothing too far,” he said. “It’s just like going to car shows — you see the same people and just get out for the day, you know?”

Shane DeGrood used to snowmobile with his grandfather. Now he and his wife, Bree, are among the leaders of the Faribo Sno-Go Club and enjoy sharing the sport with their kids.

“It’s a family-friendly event for sure,” Bree said. “I think snowmobiles are all about family. You know, it’s good fun for families to do — grandparents with parents with kids. So that’s why we do it. We hope that it stays alive. You know, that people continue to want to ride.”

The Faribo Sno-Go Club is a group of avid snowmobile enthusiasts who maintain over 100 miles of snowmobile trails throughout Rice County. The club’s been around since 1967, according to Shane.

“If we get snow here, we definitely will get (a snowmobile trip) in,” Bree said. “The best part is riding from town to town, restaurant to restaurant, bar to bar. So, it helps small business too.”

Bree said that none of it would be possible without the community.

“That’s what our club does — they groom trails so that you can go from trail to trail,” she said. “And the only reason we can do that is because all of the landowners give us approval to cut trails through their private land. … It takes the whole community to make it happen.”

Bree said she likes the members of the group and can rely on them.

“This is a good group,” she said. “The majority of the people in our group are older and they’ve been doing this for decades. You can count on them, you know? When we commit, we’ll be here, we’ll show up. Unless there’s a blizzard.”

But one of Bree’s concerns is that there’s less young people getting involved in the snowmobiling community.

“I would love to get younger people involved,” she said. “The hard part is younger people have kids. So, their kids are in sports. You know, it’s busy.

Snowmobiling also can be a costly hobby, Bree said.

“Sleds cost money,” she said. “Then, you got to register them and you got to maintain them. If you’re going on a trip and go up north, you gotta get a hotel and food and travel up.”

But membership in the Faribo Sno-Go Club is not a significant added expense. It’s $35 a year and covers the whole family.