Billings family in shock after vehicle crashes through fence 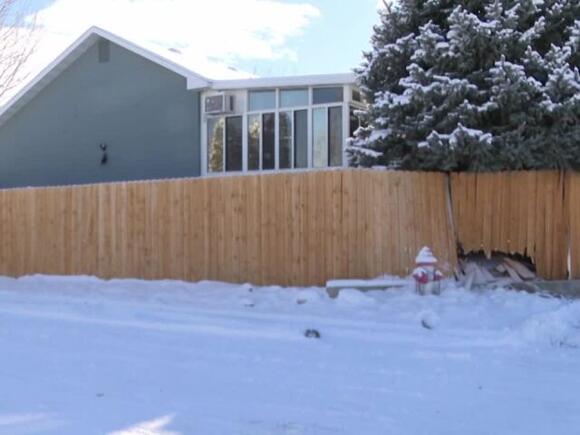 BILLINGS - When Ashley Power came home from work Friday evening, she was greeted with an unpleasant surprise: the fence to her backyard destroyed after someone had driven through it.

The Powers have owned their house, which is located on the corner of 36th Street West and Rosebud Drive, for over 20 years, and Ashley said they've never encountered anything like this.

“It’s pretty scary, especially having kids and pets," Power said. "Thinking that we have this fence to keep people out and just having someone go right through it is a little alarming."

Power said she believes it was an accident, due to slippery roads from fresh snowfall. However, she would have liked to know who was involved so that they could handle some of the financial responsibilities.

Instead, the driver took off and left no way to contact them.

“Accidents happen. Leave a note or knock on the door and be like, ‘oh no. This just happened,'" Power said. "We’re going to have to pay for this. We do have insurance, but deductibles are high."

Power filed a police report, and she said Billings Police Department has been involved, but it's difficult to get anywhere because no one has come forward with any videos or pictures of the fence being destroyed.

While the destruction of the fence is alarming, Power knows it could've been much more tragic.

“What if it was the middle of the day, and my son was behind there playing?" Power said. "You never know. You just have to be really careful."

She is hopeful that her downed fence will serve as a reminder to all to drive cautiously on slick city streets.

“Just really watch your surroundings and everything, because it could definitely look like snowpack, but it could be icy underneath,” Power said.

The crash on North 27th Street happened shortly before 10 a.m. when a car crashed into the Billings Gazette building.
BILLINGS, MT・1 DAY AGO
Q2 News

"I’m out of business, I don’t have any place to finish my furniture, display it, to have people come pick it up, nothing. I’m done until they get me a building to work out of."
BELFRY, MT・3 DAYS AGO
Q2 News

“There’s the thought that we want to do the marathon loop, you know connect the Rims to the river and get all that going so there’s plans in the works for all of that,”
BILLINGS, MT・6 HOURS AGO
Q2 News

A winter storm will bring several inches of snow to the lower elevations and over a foot in the mountains
BILLINGS, MT・1 DAY AGO
Q2 News

Wind, snow, and then a period of cold weather adds up to a sharp departure from our recent relatively quiet weather pattern.
BILLINGS, MT・3 DAYS AGO
Q2 News

The church's outdoor nativity scene was vandalized on Jan. 16--all items were destroyed--and Mary, Jesus, and Joseph statues were stolen.
BILLINGS, MT・3 DAYS AGO
Q2 News

For decades, churches across Montana have sheltered people experiencing homelessness, giving them a place to spend the night out of the cold.
BILLINGS, MT・5 DAYS AGO
Q2 News

Billings based Castlerock Excavating had their skid-steer stolen out of the Annafeld subdivision early Tuesday morning in a surprising crime that will put a hitch in the company's daily operations.
BILLINGS, MT・10 DAYS AGO
Q2 News

Sometime between Saturday December 3rd and Monday December 5th, Little was stabbed to death. His family is still searching for answers and the assailant is still on the run.
BILLINGS, MT・7 DAYS AGO
Q2 News

In the past week, residents in the Billings heights haven't received mail, and they aren't the only ones facing a delay in delivery in Montana and around the country.
BILLINGS, MT・9 DAYS AGO
Q2 News

On Jan. 13, surveillance captured a man forcing another man into a Mitsubishi Eclipse on Fourth Avenue South near the intersection of South 30th Street.
BILLINGS, MT・9 DAYS AGO
Q2 News

Daily snow showers will be possible through the weekend with a big cool down on the way as Winter makes a return.
BILLINGS, MT・4 DAYS AGO