Deputy who pulled over Mary O’Connor did ‘absolutely nothing wrong,’ Pinellas sheriff says 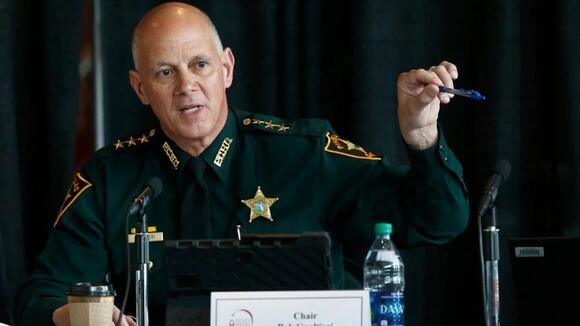 LARGO, Fla. (WFLA) — Sheriff Bob Gualtieri defended his deputy who cut Tampa Police Chief Mary O’Connor a break when she and her husband were pulled over in a golf cart in Pinellas County on Nov. 12.

The couple was let go.

During an unrelated press conference on Monday, Sheriff Gualtieri said, “Deputy Larry Jacoby did absolutely nothing wrong. I stand by him 110%.

“The person who did wrong is Mary O’Connor,” the sheriff added. “It’s had its consequences. The mayor has acted. Tampa is handling that — that’s their business.”

According to Gualtieri, Deputy Jacoby “did his job.”

“While she asked for a favor, he didn’t give her a favor,” Gualtieri said. “He handled that as he would have handled any other like situation and any other like traffic stop. People think that just because you got stopped by the cops that you’re going to get a traffic ticket, and that is absolutely not the case.”

Gualtieri pointed to the fact that the couple had driven their unregistered golf cart outside of their gated community by accident after discovering a restaurant they intended to visit was closed.

“Think about what this is,” Gualtieri said. “It’s a golf cart. They’re about 100 yards from the gated community. The only reason why they popped out was because the restaurant they were trying to go to within the gated community was closed so they went across the street.”

“Who cares?” Gualtieri added. “The outcome would not have been any different if she had just kept her mouth shut. Unless it was aggravating circumstances or extenuating circumstances, that’s a warning all day long.”

However, Gualtieri did not excuse the former chief’s actions.

“Now that doesn’t mean anything other than what she did is unethical. It’s wrong,” Gualtieri said. “She shouldn’t have said it, she shouldn’t have done it, none of that should have happened. But to say that Deputy Jacoby did anything wrong is absolutely untrue.”

all she had to do is be quiet. worst that was gonna happen was a ticket. she had to pull rank for no reason.wasn't a big deal until she pulled the old I'm the boss somewhere routine

Good for Sheriff taking up for deputy👏👍. Interesting that O’Connor didn’t report this to her superior, MAYOR, until the information became public 😳. So much for Oconner’s days of glory

While she asked for a favor, he didn't give her a favor. I call BS Sheriff Gualtieri . She gave the deputy one of her business cards and stated that if there's anything she could up him with to call. Sounds like a favor for a future favor to me.

Concerned parents reached out to 8 On Your Side regarding issues with a bus aide within Hernando County School District.
BROOKSVILLE, FL・5 HOURS AGO
WFLA

A 28-year-old man was arrested and charged on Wednesday after he allegedly attacked a disabled man over the weekend.
PINELLAS PARK, FL・12 HOURS AGO
WFLA

A man from Seminole was accused of stealing 45 bottles of liquor from Winn-Dixie totaling worth over $1,000.
SEMINOLE, FL・10 HOURS AGO
WFLA

The Pinellas County Sheriff's Office announced an arrest in a cold case dating back to 1987.
PINELLAS COUNTY, FL・5 HOURS AGO
WFLA

A 58-year-old woman was successfully rescued from underneath a public bus after she was struck late Wednesday morning, according to authorities.
SAINT PETERSBURG, FL・1 DAY AGO
WFLA

Tampa police say a woman in her 20s was murdered sometime Monday evening in the New Tampa Subdivision of Easton Park in the 10700 block of Pictorial Park Drive.
TAMPA, FL・2 DAYS AGO
WFLA

Questions remain about the murder of a mother who was found lying dead in a residential street in New Tampa Monday night.
TAMPA, FL・1 DAY AGO
WFLA

A Mississippi man was arrested late last month in connection to a murder that happened nearly 36 years ago, the Pinellas County Sheriff's Office said.
SAINT PETERSBURG, FL・1 DAY AGO
WFLA

An inmate died after he was found unresponsive in the Falkenburg Road Jail, the Hillsborough County Sheriff's Office said.
HILLSBOROUGH COUNTY, FL・1 DAY AGO
WFLA

Clearwater police are searching for the driver responsible for a crash that landed a man in the hospital Tuesday night.
CLEARWATER, FL・1 DAY AGO
WFLA

TAMPA, Fla. (WFLA) — Tampa police are investigating the death of a man who was killed Tuesday morning. Officers were called to a reported shooting in the 1700 block of East 24th Avenue around 10:20 a.m. There, officers found who they described as a black male in his late twenties with a gunshot wound. The […]
TAMPA, FL・2 DAYS AGO
WFLA

Two Sarasota women have been arrested and are facing several charges after a fight broke out over a man.
SARASOTA, FL・2 DAYS AGO
WFLA

A Tampa ordinance that barred counselors from providing voluntarily therapy to minors who sought to rid their same-sex attractions was ruled unconstitutional by the Eleventh Circuit Court of Appeals.
TAMPA, FL・6 HOURS AGO
WFLA

A semi truck caught fire in Hernando County on Thursday, causing a headache for commuters.
HERNANDO COUNTY, FL・11 HOURS AGO