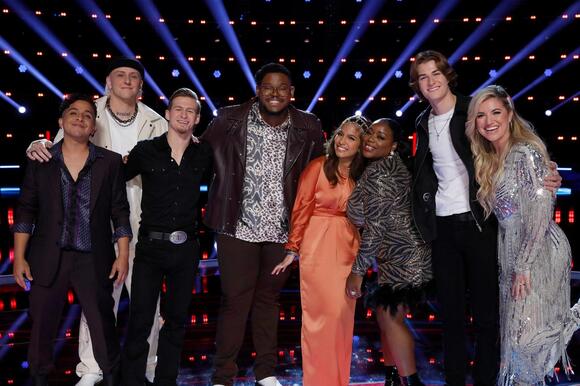 (NBC) — NBC’s “The Voice” is getting close to the end and the live semifinals are Monday with eight singers vying for the five spots in next week’s finale.

Nerves can get the best of anyone and Team Blake’s Bodie Kuljian said that last week, nerves nearly got the best of him.

“That’s the first time I’ve ever felt like that on stage like, I genuinely was concerned that I was gonna pass out mid-performance,” the artist said.

The stress does not lessen all that much when the singers await their fate.

“As the stakes get higher, it just gets harder and harder,” said Parijita Bastola of Team Legend. “There’s no way of easing the anxiety of either, you know, losing or losing a friend.”

With finale spots on the line Monday, the artists will each deliver a solo performance.

“It’s a country song, but it is a very challenging vocal song and I’m very excited to sing it,” said Team Blake’s Bryce Leatherwood.

And the artists will also each perform a duet of a Whitney Houston song.

“She is the voice of her generation, but I even go so far to say she is just the voice of every generation because her music is so timeless,” said Justin Aaron of Team Gwen.

She’s so iconic, friends of Team Legend’s Kim Cruse encouraged her to go that route weeks ago.

“I said, ‘Never,’” said Cruse. “I don’t even sing Whitney Houston in karaoke.”

As a teenager, Morgan Myles of Team Camila said she saw the legendary singer close up at a concert.

Monday, America will be looking and listening to eight singers.

“It’s almost like it’s a dream I don’t want to wake up from,” said Omar Jose Cardona of Team Legend.

Casting votes to decide which five make next week’s finale.

“It’d just be crazy,” said Brayden Lape of Team Blake. “Unbelievable. You know all those words to describe it because it’s so hard to describe it.”

The chance to find the words is almost here.

“The Voice” airs Monday and Tuesday at 8 p.m. It is followed Monday at 10 p.m. by a special holiday edition of “That’s My Jam”, with Jimmy Fallon playing host to some “SNL” alums.

A woman has died after being stabbed in Springfield early Sunday morning.
SPRINGFIELD, MA・2 DAYS AGO
WWLP

Two 12-year-old boys were out exploring and hiking in the woods Wednesday when they found a hand grenade in a pile of trash.
WRENTHAM, MA・2 DAYS AGO
WWLP

The man charged in a shooting death at the Holyoke Mall on Saturday had a license to carry (LTC) a gun according to court records.
HOLYOKE, MA・1 DAY AGO
INSIDE News

Jennifer Lopez and Marc Anthony have maintained a good friendship since they separated, and they do this for the well-being of the children they have in common. In addition, the ex-partner has always decided to support each other in any circumstance.
4 DAYS AGO
The US Sun

GOOD Morning America’s Lara Spencer was forced to take a backseat during the finale of yesterday’s show. Viewers were treated to a live performance from Cheat Codes and the country singer MacKenzie Porter at the close of Monday’s episode. Lara, who has been wearing a protective boot...
1 DAY AGO
Herbie J Pilato

The suspect in a deadly shooting at the Holyoke Mall Saturday night has been identified as a 23-year-old Springfield resident.
HOLYOKE, MA・2 DAYS AGO
WWLP

That massive fire in the North End of Springfield on Saturday night forced a childcare facility to relocate.
SPRINGFIELD, MA・1 DAY AGO
WWLP

The Sturbridge Police Department along with the Massachusetts State Police have located a person who was possibly suicidal and armed.
STURBRIDGE, MA・2 DAYS AGO
WWLP

Aftermath of massive fire on Main Street in Springfield

The families impacted are being temporarily placed in hotels nearby until they can provide other housing options.
SPRINGFIELD, MA・2 DAYS AGO
WWLP

A suspect is being charged in connection with the September 2022 robbery of a bank in Brookline.
BROOKLINE, MA・2 DAYS AGO
WWLP

A Pittsfield woman has pleaded guilty to two counts of larceny charges and sentenced to prison.
PITTSFIELD, MA・1 DAY AGO
WWLP

The Westfield Air Show returns in May but something new this year is that parking will not be free.
WESTFIELD, MA・1 DAY AGO
WWLP

From being a freshman Representative to a freshman Senator, Senator Jake Oliveira is making moves in the State House. Senator Oliveira has called Ludlow home his entire life, and now he is fighting for equity in western Massachusetts.
MASSACHUSETTS STATE・2 HOURS AGO
WWLP

TIMELINE: How the events occurred in the Holyoke Mall shooting

A Saturday night shooting at the Holyoke Mall left one innocent bystander dead. The suspect in this deadly incident appeared in court for the first time Monday morning.
HOLYOKE, MA・2 DAYS AGO
WWLP

A Springfield man was sentenced to jail in connection with stabbing two people in Northampton.
NORTHAMPTON, MA・1 DAY AGO
WWLP

Two women, including a juvenile, were injured in a shooting on Suffolk Street early Sunday morning.
SPRINGFIELD, MA・2 DAYS AGO