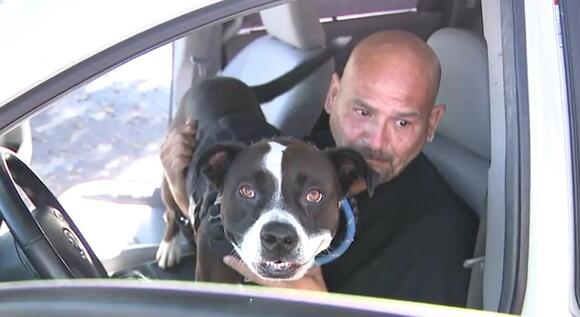 SAN DIEGO – Veterinarian Dr. Kwane Stewart also known as the “The Street Vet” has taken the lead in helping a homeless veteran.

The first time Dr. Stewart met “Richard” was back in August. Richard is a veteran living in Ocean Beach, with his dogs.

According to Dr. Stewart, Richard has been working with the Department of Veterans Affairs to find housing while living in a barely functioning car.

His dog is his constant companion, and she has been receiving free care from Dr. Stewart through his nonprofit “Project Street Vet.”

Even though they are experiencing hard times, Dr. Stewart said Richard demonstrated what it meant to be a loving pet parent. Since that encounter, “The Street Vet” continued a relationship with Richard to try and assist him and his pets’ future care.

An Instagram post when they met generated 25,000 likes and almost 1,000 comments as well as an outpouring of those who wanted to support the unhoused veteran.

On Monday morning, Dr. Stewart and Dareh Zadoorian, CEO of Los Angeles-based company HolistaPet, gave Richard the keys to a 2016 pre-owned Toyota Sienna where he and his dog, “Princess Leia,” can temporarily live and stay warm at night.

Dr. Kwane and the company are also launching a GoFundMe campaign, “HolistaPet & Dr. Kwane Change A Life” to raise money to secure housing in San Diego for Richard and “Princess Leia.”

A home with a backyard so “Princess Leia” and Richard can finally have a place to call home.

‘We have to do better’: town hall with SD leaders push for support for AAPI community

The owners of C Street Inn are being ordered to pay $332,000 for not relocating its tenants when it was unsafe to stay there, according to the San Diego city attorney.
SAN DIEGO, CA・2 DAYS AGO
FOX 5 San Diego

A San Diego business is thinking outside the box in order to save some money from all the increased costs associated with a new minimum wage, new tax and an increased utility bill.
SAN DIEGO, CA・10 HOURS AGO
FOX 5 San Diego

An 8-year-old boy is recovering in the hospital after crashing on a trampoline and later being in an induced coma.
CARLSBAD, CA・12 HOURS AGO
FOX 5 San Diego

After a recent string of attacks reported in Downtown San Diego, residents and businesses are on guard as law enforcement stress caution, alertness and mindfulness of one's surroundings.
SAN DIEGO, CA・10 HOURS AGO
FOX 5 San Diego

A skydiver continues to recover after he fell from the sky, hitting a home last week in Oceanside.
OCEANSIDE, CA・13 HOURS AGO
FOX 5 San Diego

Day 3 at the Farmers Insurance Open at Torrey Pines Golf Courses drew in hundreds of fans, including active-duty military members, veterans and their families who are getting an up-close seat to the action at hole 13.
SAN DIEGO, CA・3 DAYS AGO
FOX 5 San Diego

A skydiver from GoJump Oceanside plummeted to the ground on Friday after his parachute failed to completely open, said the Oceanside Fire Department.
OCEANSIDE, CA・2 DAYS AGO
FOX 5 San Diego

Authorities have identified a man who died as a result of a Friday night shooting spree that left three others injured in San Diego.
SAN DIEGO, CA・1 DAY AGO
FOX 5 San Diego

A large sinkhole has formed on a street in downtown San Diego, prompting crews to close off the area Friday.
SAN DIEGO, CA・3 DAYS AGO
FOX 5 San Diego

To prevent suicides at the Coronado Bridge, $14 million will be going towards a suicide deterrent system, Caltrans announced Friday.
CORONADO, CA・3 DAYS AGO
FOX 5 San Diego

Students at the University of California San Diego will soon be offered vouchers for discounted Uber rides.
SAN DIEGO, CA・4 DAYS AGO