This Week's Ep Of "The White Lotus" Had Me SCREAMING, And Here Are 34 Tweets To Tell You Why 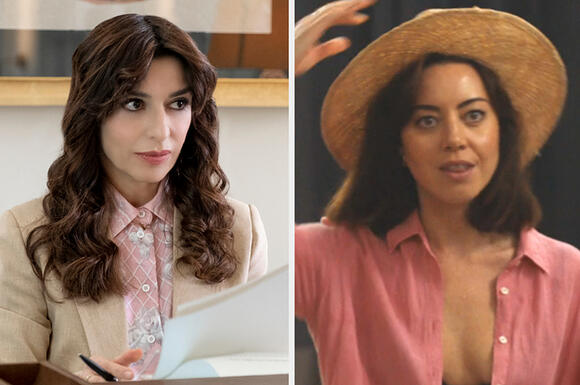 Another episode of The White Lotus blessed our screens last night, and baby, it did not disappoint!

Here's what The People™ are saying:

1. Some fans need everyone to realize that this is EVENT TELEVISION!!!

3. And just because we're all obsessed with the show, doesn't mean we have everyone's names memorized.

4. The amount of male nudity in this program has not gone unnoticed (or unappreciated!).

5. Lucia and Mia remain many people's fave part of the show.

6. While others still can't get over Harper/Aubrey Plaza (AND WHO CAN BLAME THEM?!).

7. Her and Ethan's storyline really ramped up this week.

10. But Daphne continues to live in her own little world, and frankly, I'm jealous.

13. The Di Grasso's story seemed to reach a thesis statement.

15. And gave us this absolute GEM of a character.

16. And Portia's fashións continue to be one of the most talked about parts of our little hotel show.

19. But her storyline with the "nephew" has started to overshadow even her most wild looks.

20. Including the drunken confession she got out of Jack last night.

24. Hotel manager Valentina was GOING THROUGH IT this week.

27. But at least she got to have a little fun in the end!

28. But Jennifer Coolidge's journey was both shocking and...aspirational? LOL.

29. But as "the gay's" true intentions start to become clearer, fans are starting to get worried!

31. But this reveal really was the GAG! (Shoutout to all the people who were right about this theory .)

34. Thank you for your service, White Lotus . May you never change.

If you liked these tweets, give these hilarious people a follow! And if you had any favorite moments from this week's ep, let me know in the comments!

“Felt like doing a pretty beat for you boring lemon water b**ches out there.”
2 DAYS AGO
BuzzFeed

"Picture a wave in the ocean. You can see it, measure it — its height, the way the sunlight refracts as it passes through — and it's there, you can see it, and you know what it is. It's a wave. And then, it crashes on the shore, and it's gone. But the water is still there. The wave was just...a different way for the water to be for a little while."
16 HOURS AGO
BuzzFeed

Which "That's So Raven" Scenes Are So Good, They Prove This Show Was The Best 2000s Disney Channel Show?

That's So Raven was truly ahead of its time.
7 HOURS AGO
BuzzFeed

There's nothing that makes me laugh more than the time Pedro Pascal told Oscar Isaac that he looked like the "angry eagle" muppet.
1 DAY AGO
BuzzFeed

"Ben Affleck looks like he’d rather be at Dunkin'."
4 HOURS AGO
BuzzFeed

The 2023 Grammys honored a bunch of people including Olivia Newton-John, Lisa Marie Presley, Stephen "tWitch" Boss, and Takeoff — but it also left out a lot.
3 HOURS AGO
Sara B

15 Mega Awkward Moments From The Grammys

Awkward! Beyoncé won her 31st Grammy award for Best R&B song — but the singer couldn't make it on stage as she was stuck in traffic, according to host Trevor Noah. Luckily, Nile Rodgers and The-Dream came to the rescue and accepted the trophy. "Y'all know n****s be on CP time," the latter said. "Beyoncé thanks y'all.""When I got called to play on this song, it was the most organic thing that every happened to me. I heard the song and I said, 'I want to play on that right now.' It was one take. I promise. I played it....
10 HOURS AGO
The US Sun

OZZY Osbourne has been seen for the first time since cancelling his upcoming shows and retiring from touring. The 74-year-old singer made the announcement this week and said he's "not physically capable" after a recent operation. Black Sabbath icon Ozzy was today photographed looking frail as he walked with the...
2 DAYS AGO
TheDailyBeast

It’s not often people want to sit farther from the stage at an awards show, but you could practically hear the seats scooting backward at the Grammys Sunday night as host Trevor Noah made his way through the crowd. After an energetic introductory performance from Bad Bunny, Noah—now on his third consecutive year as Grammys emcee—handled his duties confidently. And yet, the energy in the room felt vaguely like the end of a Zoom meeting. As the comedian worked the crowd, strolling from table to table, guests’ eyes seemed fixed on the centerpiece in front of them, or on the...
10 HOURS AGO
BuzzFeed

Women Are Sharing All The Things That Actually AREN'T Made For Us At All, And The List Is Infuriatingly Long

We just accept that our seatbelts slide up and dig into our necks, and honestly, we shouldn't.
12 HOURS AGO
The Independent

Taylor Swift fans had all sorts of reactions to her breaking into her signature dance moves during Bad Bunny’s 2023 Grammy Awards performance.The 65th annual event opened with a performance by Bad Bunny, who was up for three awards at the event, including “Album of the Year”. While the singer was onstage, some of his dancers joined the attendees in the audience.Swift was one of the many stars who danced along to the singer’s music and was seen moving along to the music in her seat. She also got up to dance with two of Bunny’s dancers.On social media,...
8 HOURS AGO
BuzzFeed

Women Are Sharing The Worst DM's They've Ever Received, And I'm Begging Men To Just Leave Us Alone

Being a woman online is soooo fun (not).
2 DAYS AGO
BuzzFeed

Selena Gomez Shared A Completely Unfiltered Pic On Instagram, And It Was So Refreshing To See

"It's nice embracing who you are and trying to have a natural glow rather than [constantly] cover up."
2 DAYS AGO
BuzzFeed

Women In Relationships Are Sharing The Most Wholesome Moment They've Ever Shared With Their Husband Or Boyfriend, And This Is Incredibly Pure

"Every morning during the workweek, he makes me coffee, sings to wake me up, and reads a chapter of the book we’re reading that month to help me not fall back asleep. It’s the perfect way to wake up."
14 HOURS AGO
BuzzFeed

Quavo really poured his heart out during his performance.
3 HOURS AGO
BuzzFeed

18 "Normal" Things In Our Society That Are Actually, Pretty Weird, Cruel, Damaging, Etc.

"Only doing nice things for clout. I’m looking at all the influencers who film themselves giving food, blankets, money, etc., to homeless people. Tell me they’d do that if there wasn’t a camera filming them."
1 DAY AGO
BuzzFeed

Spoiler alert: the kids are still hanging out down the street doing the same old thing they did last week.
3 DAYS AGO
BuzzFeed

Seth Rogen Weighed In On Superhero Movies, And Finally, Someone Made A Valid Criticism Of The Genre

The debate surrounding the Marvel Cinematic Universe is really bringing out the heroes and villains.
11 HOURS AGO