'Arrogance and greed': Michael Avenatti sentenced to 14 years in prison for stealing from clients 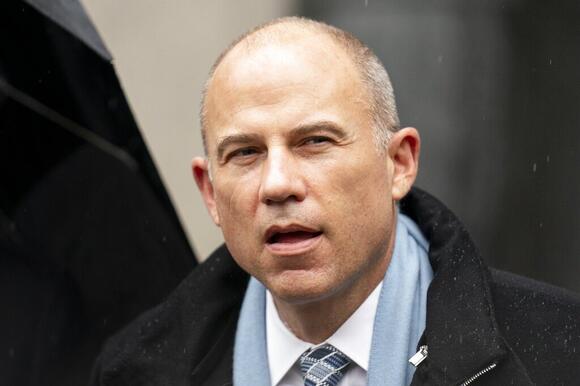 C elebrity lawyer Michael Avenatti, 51, was sentenced to 14 years in prison on Monday for dodging taxes and stealing millions of dollars from his clients.

The 14-year sentence concludes the final prosecution against Avenatti of three different criminal cases. He is already serving five years for extortion and fraud convictions he received at two trials in New York.

U.S. District Judge James V. Selna in Santa Ana acknowledged that Avenatti had accomplished "good things in life" but has "also done great evil," according to the Los Angeles Times. Avenatti, who represented himself in court, will have to pay $8 million in restitution to his victims.

He will begin his 14-year sentence after his five-year sentence is finished. He is currently incarcerated at the low-security Terminal Island federal prison in San Pedro.

The attorney pleaded guilty in June to four counts of wire fraud to steal money from clients and one count of obstructing collection of federal payroll taxes from his Seattle coffee business, which no longer exists.

In one instance, Avenatti's client, Geoffrey Ernest Johnson, won $4 million in a lawsuit against Los Angeles County. However, Avenatti kept the bulk of the money when it was wired to him in 2015 and lied about it.

Johnson, a paraplegic on disability, said he had trusted Avenatti completely and believed everything he was told.

“To this day, I have a hard time trusting people because of what Michael did, and I live in constant fear of being taken advantage of again, particularly given my physical disability," Johnson wrote in a court statement.

Avenatti also stole from another client, Alexis Gardner, who received a $2.75 million settlement from her ex-boyfriend Hassan Whiteside, who played for the Miami Heat at the time. Avenatti bought a private jet with most of the money, he admitted.

The celebrity lawyer asked for no more than six years in prison that would run concurrently with his current New York five-year sentence.

He said he deserved prison time and the loss of his assets, law license, and 22-year career, but not excessive jail time.

"This case, while serious, does not begin to approach a case involving a crime of violence or a fraud resulting in a loss of tens of millions or hundreds of millions of dollars," Avenatti wrote in a memo to the judge.

Avenatti also stole $3.2 million in federal payroll taxes that his company, Global Barista U.S., collected from employees of Tully's Coffee that were intended for the government.

Assistant U.S. Attorneys Brett A. Sagel and Ranee A. Katzenstein wrote to Selna in a memo stating that his past successes in law were "no excuse for the defendant's criminal conduct, which was motivated solely by arrogance and greed."

“Defendant did not commit his crimes to support his family, pay child support, or for any other arguably mitigating reason; to the contrary, he stole from his clients to live an extravagant lifestyle while some of his victims could barely make ends meet," the attorneys wrote.

The attorney gained national attention for representing adult film star Stormy Daniels in her legal battles against former President Donald Trump in 2018. Daniels had accepted a $130,000 payment in 2016 to not discuss an alleged sexual encounter with Trump, which Avenatti attempted to void and ultimately lost.

Essential Connecticut workers who worked through the COVID-19 pandemic are set to receive a payment worth up to $1,000 on Feb. 1.
CONNECTICUT STATE・1 DAY AGO
WashingtonExaminer

House Rep. Andy Biggs (R-AZ) is set to file articles of impeachment against Department of Homeland Security Secretary Alejandro Mayorkas, reviving his previous efforts to charge the Biden administration official for his handling of illegal immigration at the southern border.
ARIZONA STATE・2 DAYS AGO
WashingtonExaminer

The White House defended its failure to disclose an FBI search of President Joe Biden’s think tank in the weeks after the president’s attorneys found classified documents at the site.
WASHINGTON STATE・2 DAYS AGO
WashingtonExaminer

The Social Security Administration's first round of retirement payments for the month of February, worth up to $4,194, will begin being issued to recipients starting next week.
1 DAY AGO
WashingtonExaminer

'Too hard for you guys to keep up with': Biden's infrastructure czar gets testy

President Joe Biden's infrastructure czar got testy with a reporter who questioned why the White House is promoting projects that will take 10 years to complete and how many Americans know about them.
NEW YORK CITY, NY・3 DAYS AGO
WashingtonExaminer

California taxpayers may get some extra love given to them in time for Valentine's Day thanks to the final wave of the state's Middle Class Tax Refund.
CALIFORNIA STATE・1 DAY AGO
WashingtonExaminer

Since former President Donald Trump announced his 2024 bid for the White House last year, no other Republicans have declared their candidacy.
IOWA STATE・2 DAYS AGO
WashingtonExaminer

Several Texans are dead and nearly 400,000 people in the state are without power as ice storms are expected to ease up in the South on Thursday.
TEXAS STATE・1 DAY AGO