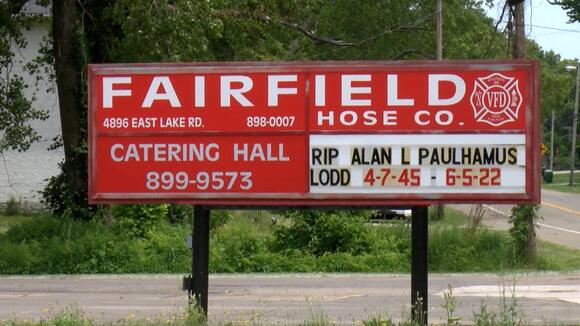 (WJET/WFXP/ YourErie.com ) — It’s new, but is it really? Fairfield Hose Company was founded as a volunteer fire department in Harborcreek in 1945, and shortly thereafter it received a liquor license. It had a social club then. That club operated until it closed in 1999. Recently, the space served as a catering club.

According to Fairfield Hose Company President Jeffrey Hawryliw, the department set a 90-day goal of gathering 400 members. On Dec. 5, a mere 13 days into soliciting memberships, 380 people had signed up for memberships.

“We wanted just to see how receptive people would be to opening the club — it’s just beyond our belief and so amazing,” Hawryliw said.

The department is planning to hire staff to run the club, including a general manager, wait staff and bartenders. Optimistically, Hawryliw said the club could provide 40 jobs, but he said that estimate might be “a little high.”

The primary goal of the social club is to fund the volunteer fire department.

“Our main goal is to make it financially stable for the future, to fund the department, and to eventually hire a paid staff for our ambulance,” Hawryliw said. “The main focus now is getting more revenue in the door and potentially some new members.”

Over $586,000 in grants awarded to several fire and EMS companies

Only 400 founders memberships will be sold. Once the limit is hit, the prices will go up. Members must be 21 years old.

The department hopes to open the club doors in 2023 — tentatively in April.

“We’re super excited about the entire situation — we have never anticipated the overwhelming support we’ve gotten so far. It’s super great,” Hawryliw said. “We’re happy about what has ended up transpiring so far, and we really look forward to providing this resource to Harborcreek Township, providing jobs, and opening the club this spring.”

Earthquakes in Erie are possible but uncommon

(WJET/WFXP/YourErie.com) — For Pennsylvania the United States Geological Survey has tracked 370 earthquakes, the earliest in 1938. The nearest earthquake to Erie was in Middleboro (now McKean) in 1990. It was a magnitude of 2.5. For comparison, on Monday, Feb. 6, an earthquake in Buffalo was a magnitude 3.8 and was felt by residents but […]
ERIE, PA・10 HOURS AGO
YourErie

Monday has already been especially sweet for one local candy maker. Stefanelli’s Candies held a ribbon-cutting to officially open their new Harborcreek location. The new store is located at 4500 Buffalo Road in the Price Rite Plaza. A $30,000 loan from the Erie County Redevelopment Authority and the Harborcreek revolving loan fund jump-started the project. […]
HARBORCREEK TOWNSHIP, PA・7 HOURS AGO
YourErie

Pennsylvania Governor Josh Shapiro says his team has been monitoring the situation after a train derailed in Ohio that involves potentially dangerous chemicals that may impact some residents in western Pennsylvania. Norfolk Southern is planning a “controlled release “of toxic material at approximately 3:30 p.m. Officials have feard a potentially dangerous explosion with shrapnel. Governor […]
PENNSYLVANIA STATE・10 HOURS AGO
YourErie

The epicenter of the earthquake was located 1.3 miles east northeast of West Seneca.
BUFFALO, NY・15 HOURS AGO
YourErie

He may only be 9-years-old but he's already graduated high school and started college courses.
HARRISBURG, PA・3 HOURS AGO
YourErie

10 amusement parks to visit in Pennsylvania

PENNSYLVANIA (WHTM) — Pennsylvania is full of thrills when it comes to roller coasters and thrill rides abc27 has put together 10 of the Keystone State’s best amusement parks that will cater to any thrill seeker, young and old! Waldameer -Erie, Pa. Opening in 1896, Waldameer is the nation’s 10th-oldest amusement park. It features 100+ […]
PENNSYLVANIA STATE・1 DAY AGO
YourErie

(WTAJ) — Grab your tickets, Powerball numbers have been drawn for the estimated $700 million jackpot and one lucky Pennsylvanian hit big! The winning numbers for Saturday, Feb. 4 are 02,08,15,19,58 and the Powerball was 10. The Power Play was 2x. While nobody claimed the jackpot, one lucky Pennsylvanian matched all five numbers and won […]
PENNSYLVANIA STATE・15 HOURS AGO
YourErie

The Powerball jackpot rose once more to $747 million Saturday night after the Feb. 4 drawing still had no jackpot winner.
PENNSYLVANIA STATE・1 DAY AGO
YourErie

Polar bear in fatal Alaska attack was in poor health

ANCHORAGE, Alaska (AP) — A polar bear that killed a young mother and her baby last month in western Alaska was likely an older animal in poor physical condition, but tests came back negative for pathogens that affect the brain and cause aggressive behavior, officials said Monday. Dr. Kimberlee Beckmen, a state wildlife veterinarian, collected and examined […]
ALASKA STATE・2 HOURS AGO
YourErie

What is P-EBT and who qualifies for it?

For the 2022-2023 school year, some schools and children may be eligible to receive P-EBT benefits when COVID-19 disrupts normal classes.
OHIO STATE・2 DAYS AGO
YourErie

A Kansas House bill calls for a tax on public EV charging—but not home charging.
KANSAS STATE・1 DAY AGO
YourErie

PENNSYLVANIA (WHTM) — It’s no surprise that Pennsylvania has been featured in countless films throughout the years. Take a look at abc27’s list to see if you knew these movies were filmed in Pennsylvania. All information for this article was sourced from IMDb. Adventureland (2009) “Adventureland,” starring Jesse Eisenberg, Kirsten Stewart, and Ryan Reynolds, follows […]
PENNSYLVANIA STATE・1 DAY AGO
YourErie

"Today I learned that it's only a Texas thing to sell pickles at the movie theater and I can't decide if Texans are genius or just weird."
TEXAS STATE・2 DAYS AGO
YourErie

Biden says US ‘going to take care of’ Chinese balloon: Here’s how it might happen

President Joe Biden said Saturday that officials are "going to take care" of a suspected Chinese "spy" balloon that's been floating above the U.S. for days now.
INDIANA STATE・2 DAYS AGO