By By Joseph Spector and Katelyn Cordero
POLITICO
2022-12-05

King was unanimously selected to head the 64-campus system by the SUNY Board of Trustees, concluding a yearlong, nationwide search that ended with them landing on a familiar person to New York education leaders. He headed the state Department of Education during a tumultuous time from 2011 through 2015.

King was confirmed as U.S. secretary of education under President Barack Obama from 2016 to 2017, and then he ran unsuccessfully last year for Maryland governor.

He said he looks forward to addressing SUNY's decade-long decline in enrollment, particularly at its community colleges. He also wants to increase interest in community development and investing in the state’s workforce pipeline.

“We have a tremendous opportunity to advance access, affordability and completion and to make SUNY the strongest possible driver of economic development and economic mobility for the state,” King said in an interview with POLITICO. “I’m very excited, and having served at every level of the education system, from classroom teacher to principal, to leading schools and school systems…to bring all of those experiences to bear in this work.”

King, a Brooklyn native and the state's first Black and Puerto Rican chancellor, will start in January and succeed interim SUNY Chancellor Deborah Stanley, who has been filling the leadership post since Jim Malatras resigned a year ago.

SUNY board chairperson Merryl Tisch described a “robust” national search to replace Malatras. Many of the trustees who spoke on Monday morning mentioned King's background in the state’s education system as a key to his success in landing the role. He is currently the president of The Education Trust , a national non profit.

“It’s a great honor to have Dr. King consider this role at this time, with all of the challenges, but all of the opportunities as well,” Tisch said in an interview. “I think he brings great distinction and great honor to SUNY and to the state of New York.” 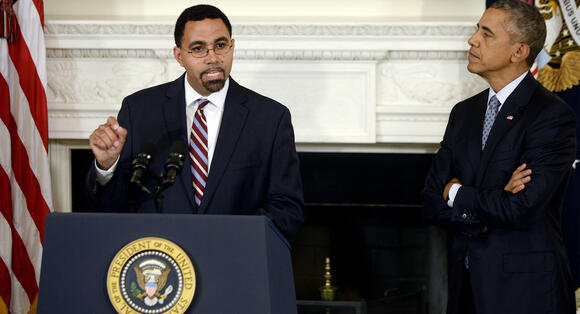 King will join a diverse group of leaders at the helm of the state’s education system, and he vowed to collaborate closely with state Education Commissioner Betty Rosa , the first Latina to fill her role, to help the 1.3 million students who take SUNY classes.

He said improving equity and diversity is a key issue, especially in developing a diverse workforce for the state’s public schooling system.

“It makes me happy to see the progress that the state and the country have made, but I would also say there’s work to do,” King said. “We have real opportunity gaps that we have to close as a country…I want to make sure that SUNY is the national leader in diversity, equity and inclusion.”

King left as education commissioner amid a firestorm over Common Core curriculum standards that the state tried to implement on districts due to new federal standards. The state's largest teachers union, New York State United Teachers, approved a vote of no confidence in him in 2014 and called on the state Board of Regents to fire him.

His time as education commissioner left some parents and advocates still in opposition of his SUNY appointment. Lisa Rudley, executive director of NY State Allies for Public Education, said students and staff should be “forewarned.”

“John King consistently ignored the legitimate concerns of parents and teachers regarding the policies he pursued as NY state education commissioner by rewriting standards, imposing an arduous high stakes testing regime and basing teach evaluation on student test scores, none of which had any research behind it and all of which undermined the quality of education in our public schools,” Rudley said in a statement.

But NYSUT and other education leaders took a more conciliatory tone Monday on King's return.

“We will work with Chancellor King to ensure that our campuses and the educators serving on them receive the critical funding and support they deserve as we continue to push toward a common goal: Making sure every New Yorker has access to an affordable and exceptional public education," NYSUT president Andy Pallotta said in a statement.

"I think we have to recognize that SUNY is really a great university system with the potential for even greater accomplishments," she said. "It’s the avenue of opportunity for so many people."

While Stanley said she is excited to work with King in the next few weeks of transition, she is looking forward to retirement.

“It was such a wonderful experience to be able to come to an organization that is being challenged — with the funding in place — to step up and take a role in moving forward not only SUNY forward, and doing the best for our students, but also moving the state forward in economic development ways," Stanley, who served for 25 years as the SUNY Oswego president, said in an interview.

SUNY is an economic driver across much of upstate New York, but it has suffered from enrollment declines due in part to population drops in the region. Under Stanley, the administration bolstered its efforts to improve enrollment with robust campaigns and initiatives that have lead to promising increases in applications for the fall.

The Board of Trustees is set to meet next week to propose its budget for the fiscal year that starts April 1.

Gov. Kathy Hochul, who along with the state Legislature controls SUNY's budget, said she was pleased with King's selection, saying King benefits from being a New York with deep knowledge of its education system. He started his career teaching social studies in Puerto Rico and Boston.

"We are looking for a transformational figure, someone that will come here and reestablish the preeminence that I always thought SUNY should have," Hochul said.

The New York Republican is planning to launch a new federal PAC without Nancy Marks.
WASHINGTON STATE・2 DAYS AGO
POLITICO

'An embarrassment': Romney on his sharp words for Santos

Asked if he was disappointed that Speaker Kevin McCarthy isn't pressing the New Yorker to resign, the GOP senator said "yes."
1 DAY AGO
POLITICO

Healey strikes a blow to teachers

LO AND NOT BEHOLDEN — One of the benefits of running virtually unopposed for governor: the list of people you owe is pretty short. Endorsements hardly mattered for Maura Healey in her campaign for the corner office. The Democrats’ heir apparent coasted through the last few months of her primary with no competition and encountered only weak opposition ahead of November. Those who did endorse Healey mostly played it safe by lining up behind her after she cleared the primary field, at which point their support barely registered.
MASSACHUSETTS STATE・2 DAYS AGO
POLITICO

As the Midwesterner joins top party leadership, she could soon face a choice between further testing her clout inside the Capitol and another White House bid.
MINNESOTA STATE・1 DAY AGO
POLITICO

Charles Allen’s big public transit dreams for the nation’s capital are starting to turn into reality. Allen, a member of the D.C. Council since 2015, saw his bill that will create free bus rides across the city become law late last month. The Metro for D.C. Amendment Act of 2022 makes Washington the largest city in the country to go fare-free as the movement picks up steam nationwide.
WASHINGTON, DC・16 HOURS AGO
POLITICO

Good Wednesday morning, Illinois. We caught Goodman Theatre's production of “Toni Stone” about the first Black woman to play in the Negro Leagues. It’s poignant and funny, and you don’t have to know baseball to enjoy it. TOP TALKER. FIRST IN PLAYBOOK: The City of Chicago...
CHICAGO, IL・20 HOURS AGO
POLITICO

George Gilmore lost his influence after three felony convictions. Now he's back — and working to shape the state's next race for governor.
OCEAN COUNTY, NJ・3 DAYS AGO
POLITICO

DeSantis on Trump’s attack: ‘I don't spend my time trying to smear other Republicans’

Evan Lambert was held for about five hours before being released from jail.
OHIO STATE・3 HOURS AGO
POLITICO

After waiting decades for a truly open seat in the upper chamber, plenty of ambitious Democrats are eager to jump in the race.
CALIFORNIA STATE・3 DAYS AGO
POLITICO

Lawmakers may soon require schools to keep Narcan on hand amid an influx of fentanyl into the state.
SACRAMENTO, CA・3 DAYS AGO
POLITICO

California, Arizona and Nevada are among the states at odds over how to divide the river's water — a fight among powerful political and economic interests with dire consequences.
CALIFORNIA STATE・4 DAYS AGO
POLITICO