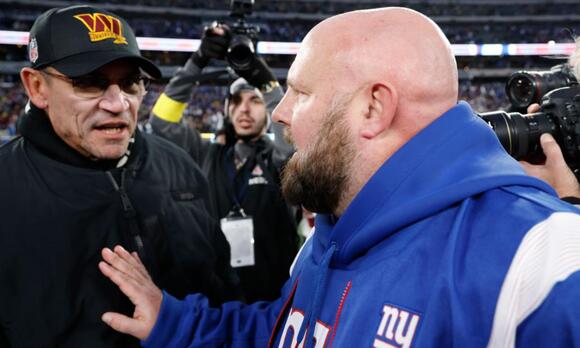 The NFL flex schedule is great. Likely with a playoff spot on the line, the Commanders and Giants are now the prime-time game for Week 15. Sunday Night Football in a couple of weeks is going to look different than originally planned.

If you were hoping to watch the New England Patriots and Las Vegas Raiders in the top spot two weeks from now, tough luck. Those teams are getting booted to the mid-afternoon. Meanwhile, that 8:20 p.m. EST slot is going to go to the Commanders and Giants.

This isn’t the first time that we’ve seen the flex this season. Steelers and Bengals were flexed earlier this season while the Broncos and Chiefs were flexed for this upcoming week. Adam Schefter of ESPN had the news on Twitter.

This time, a team is being flexed INTO a time slot and not out. While this will likely be a game with huge playoff implications, it just doesn’t feel that exciting. Perhaps that is because these two teams just played each other this Sunday.

The game was back and forth and ended with a disappointing tie. 20-20 was the final score as neither team was able to take advantage in the end. Both kickers missed one field goal on the day. If one of those had connected, we would have had a definitive winner between the Washington Commanders and New York Giants .

Commands-Giants Rivalry Means Something This Season

There are a few old-school rivalries that have found renewed purpose this season. Between the solid year that the Commanders, Giants, Cowboys, and Eagles have all had this season, it is worth watching when they face off. The NFC East is back! While the game this past Sunday was ultimately a tie, that doesn’t mean it wasn’t important.

The division as it stands right now begins and ends with the Eagles . Their 11-1 record makes them not only the top team in the division but in the entire league. Following close behind are the Cowboys at 9-3. That leaves us with the Commanders and Giants who are separated by one game.

If the Commanders didn’t have that extra loss on their schedule, then they would match the Giants’ 7-4-1 record. Which one of these teams is going to make the playoffs? Washington and New York will be buzzing during Week 15 in anticipation of this game.

This unidentified NFC coach apparently was trying to be funny with a comment about Patrick Mahomes. Still, you don’t often see the word “flopped” adjacent to the name of one of the most dynamic quarterbacks in the NFL. Let’s go back to the final seconds of the...
CINCINNATI, OH・16 HOURS AGO
Outsider.com

NFL broadcaster Tony Romo made a strange and head-scratching mistake by almost saying a certain word during the Chiefs-Bengals game. The verbal miscue caught the attention of plenty of fans around the league, and eventually the attention of Shannon Sharpe who weighed in on the debate in a humorous way.
CINCINNATI, OH・1 DAY AGO
Outsider.com

The story of Sunday’s AFC Championship Game is getting very muddied for many reasons. Over the next few days and weeks, NFL fans around the country will discuss the officiating of the game between the Kansas City Chiefs and the Cincinnati Bengals. It’s quite simple to understand why. These...
CINCINNATI, OH・2 DAYS AGO
FanSided

Former Dallas Cowboys offensive coordinator Kellen Moore has a new gig, as he’ll take on the same duties with the Los Angeles Chargers. Kellen Moore’s departure from Dallas was odd to say the least, as the two sides mutually agreed to part ways. Per NFL insider Mike Garafolo, Moore wanted a new challenge, and Jerry Jones let him out of his contract.
DALLAS, TX・1 DAY AGO
Outsider.com

In a tragic incident, a great white shark took a diver’s life after the apex predator ripped off the diver’s head. This also marks this year’s first fatal shark attack. According to reports, Manuel Lopez was scuba diving off the coast of Mexico near Benito Juárez in Sonora, on the west coast of Mexico. During the incident, the 19-foot shark attacked him. At the time, horrified fishermen watched helplessly.
CALIFORNIA STATE・2 DAYS AGO
Outsider.com

It’s Monday. We’re still coming down from that fantastic Bengals-Chiefs finish. And finally, the ears stopped ringing from all that Tony Romo shouting. The pitch of Romo’s voice kept growing higher throughout the game. And NFL fans viewing at home began noticing that Tony Romo also was speaking nonsense.
KANSAS CITY, MO・1 DAY AGO
Outsider.com

WATCH: Joey Bosa Gets Into Heated Exchange With Eagles Fans, Has To Be Separated

Philadelphia is always a wild scene when the Eagles are in the NFC Championship Game. It was back in 2018... The post WATCH: Joey Bosa Gets Into Heated Exchange With Eagles Fans, Has To Be Separated appeared first on Outsider.
PHILADELPHIA, PA・2 DAYS AGO
Outsider.com

While the Philadelphia Eagles were getting their trophy and celebrating – Terry Bradshaw represented the FOX broadcast on stage. Turns out, fans didn’t like it too much. The NFL Hall of Famer caused all kinds of comments to be made online. Terry Bradshaw has been around a few...
PHILADELPHIA, PA・1 DAY AGO
Outsider.com

A team of scientists and researchers recently sent a camera down a 300-foot borehole in Antarctica to study the oldest ice on Earth. As seen in a now-viral video, Ph.D. student Austin Carter, who is part of a team of researchers collecting samples they estimate to be two million years old, sent the camera down the deep hole until it reached soft snow and ice.
1 DAY AGO
Outsider.com

It’s been nearly 20 years since Keanu Reeves brought us the now cult-classic film Constantine. When the 2005 film hit the silver screen, fans of the comic book Hellblazer for which Constantine was based flocked to the theaters. However, the Keanu Reeves-led action movie didn’t make huge waves throughout the entertainment industry during its initial release.
1 DAY AGO
Outsider.com

Professional skier Kyle Smaine, winner of the 2015 Freestyle Ski and Snowboarding World Championships, died in a horrific ski accident Sunday, his family confirmed. The skier was caught in a backcountry avalanche triggered near a Japanese ski resort. According to reports, five skiers found themselves trapped in an avalanche on...
1 DAY AGO
OnlyHomers

Once again, the Dallas Cowboys failed to make a deep playoff run as they fell short losing to the San Francisco 49ers 19-12 last Sunday in the divisional round of the playoffs. The elite offense of the Dallas Cowboys sputtered and struggled, which lead to Jerry Jones and head coach Mike McCarthy to make a tough decision.
DALLAS, TX・1 DAY AGO
Outsider.com

Hall of Fame quarterback Peyton Maning has been advocating for the Indianapolis Colts to hire Cincinnati Bengals offensive coordinator Brian Callahan, according to Albert Breer of Sports Illustrated. Breer also reports the Colts are hoping to bring Callahan in for a second interview Wednesday. He is also in consideration for...
INDIANAPOLIS, IN・1 DAY AGO
Outsider.com

Miranda Lambert made a statement on Championship Sunday as the Kansas City Chiefs were playing Cincinnati. Lambert was all decked out in Chiefs gear and cheering on their quarterback, Patrick Mahomes. In a tweet, Lambert mentions that she’s cheering on her fellow East Texan. She was born in Lindale while Mahomes was born in Tyler. When fans saw Lambert’s tweet, they were sounding off big-time.
KANSAS CITY, MO・2 DAYS AGO
Outsider.com

Cindy Williams played the cheerful Shirley Feeney for eight seasons on Laverne & Shirley opposite Penny Marshall. Williams, who died on Jan. 25 at 75 years old, is being remembered by fans all over the world. She portrayed the Shotz Brewery worker in a hilarious way. The antics of Shirley and her friend, Laverne DeFazio, played by Marshall, kept people tuning in week in and week out.
1 DAY AGO
Outsider.com

Tania Raymonde, the actress who played Anna Real in a 2005 installment of NCIS, is returning to the series—but not as Anna Real. In her first appearance, Raymonde’s character was the abused ex-wife of high-powered dirty government operative Guyman Purcell. Anna threatened to tell the government about his illegal dealings if he didn’t let her leave him, so he ordered her execution. The hitmen he hired killed her sister by mistake, thinking it was her, and Anna had been on the run for years until she crossed paths with the team.
HAWAII STATE・2 DAYS AGO
Outsider.com

Here’s to so many more meetings between Patrick Mahomes and Joe Burrow. This rivalry could define the NFL for years. Mahomes’ Chiefs won Sunday and earned the invite to the Super Bowl. There was plenty of drama, with Kansas City winning 23-20 on a last-second field goal,. Ever...
KANSAS CITY, MO・15 HOURS AGO
Outsider.com

You ever get that nagging feeling that folks are talking about you, but not including you in the conversation? Aaron Rodgers thinks that’s happening now with the Packers. Rodgers still is making up his mind about whether he should leave the NFL and retire. After all, he’s 39. It may be time. Or maybe he’ll stick around football for a while longer, but leave Green Bay, where he’s played his entire career. Whether or not he’s truly made up his mind, Aaron Rodgers likes to keep folks guessing, dangling over his every clue. He did the same last year.
GREEN BAY, WI・11 HOURS AGO
Outsider.com