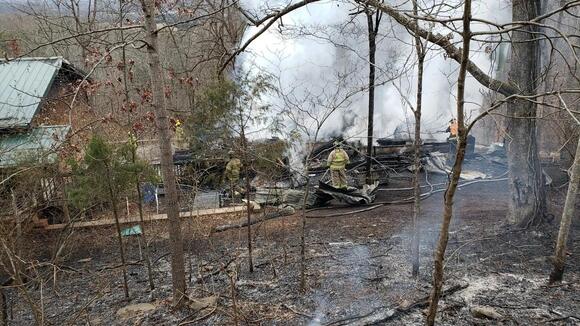 UPDATE: (4:40 P.M. Dec. 5, 2022) – First responders say no one was home when a fire destroyed a Jackson County, West Virginia house this afternoon.

Crews say the house was already fully involved when firefighters arrived on scene. Authorities say all fire departments in Jackson County as well as departments from Mason and Kanawha counties responded to the scene, for a total of 10 departments battling the fire.

No injuries were reported in the fire.

According to crews on scene, flames were visible from the home and the roof collapsed. Crews say the home burned down and a detached garage and woodshop received some damage.

Emergency crews say it is too soon to determine the cause of the fire.

EVANS, WV (WOWK) – Multiple emergency crews are on the scene of a structure fire in Jackson County, West Virginia.

According to Jackson County dispatchers, a call came in around 2:30 p.m. Monday, Dec. 5, 2022, regarding a structure fire on Random Road in Evans, WV.

This is a developing story, and we will continue to update this article as more information becomes available.

KANAWHA COUNTY, WV (WOWK) — Metro 911 says there was a brush fire in the Wallace area of Kanawha County, West Virginia, on Saturday afternoon. Responders arrived at the scene near 10 Gander Lane around 1:54 p.m., dispatchers say. One person with injuries was taken to the hospital, according to dispatchers. They do not know […]
KANAWHA COUNTY, WV・1 DAY AGO
WOWK 13 News

Speeding a concern in Ohio neighborhood where car crashed into home

PROCTORVILLE, OH (WOWK) — A driver accidentally crashed their car into a house in Proctorville, Ohio, early Saturday morning, the homeowner said. “Please say a prayer for our family,” Grace Curtis wrote on Facebook. “We woke up at 1 a.m. to our house shaking, people screaming, and a car coming in our living room.” Curtis […]
PROCTORVILLE, OH・6 HOURS AGO
WOWK 13 News

CABELL COUNTY, WV (WOWK) — Cabell County 911 dispatchers say one person was taken to the hospital after a two-vehicle crash on Interstate 64 in West Virginia. Dispatchers say the call came in around 5:27 a.m. on Sunday about a wreck near the 24 Mile Marker of I-64 West in the Milton area. The westbound […]
MILTON, WV・9 HOURS AGO
WOWK 13 News

WINFIELD, WV (WOWK) — A residential fire in the 4000 block of Rocky Step Road in Winfield is fully involved. Putnam County dispatchers say the call came in around 4 p.m. They say no one was believed to be in the building at the time of the fire. Winfield, Eleanor and Teays Valley Fire Departments […]
WINFIELD, WV・2 DAYS AGO
WOWK 13 News

Man safe, getting behavioral help after barricading from Ohio authorities

GALLIA COUNTY, OH (WOWK) — Gallia County Sheriff Matt Champlin says one man is safe after he barricaded himself from deputies and threatened to hurt himself. According to Sheriff Champlin, deputies responded to a home in Springfield Township, Ohio, for a report that a man brandished a gun and threatened to use it on himself. […]
GALLIA COUNTY, OH・7 HOURS AGO
WOWK 13 News

CHARLESTON, WV (WOWK) — Metro 911 says police pursued a suspect on foot in the Kanawha City community of Charleston, West Virginia, on Saturday afternoon. The pursuit started around 2:44 p.m. and only lasted a minute near 50th Street, dispatchers say. The Charleston Police Department has one woman in custody, according to dispatchers. 13 News […]
CHARLESTON, WV・1 DAY AGO
WOWK 13 News

The student was found deceased from presumed medical issues in a campus residence hall.
HUNTINGTON, WV・3 HOURS AGO
WOWK 13 News

CHARLESTON, WV (WOWK) – The Charleston Fire Department says the cause of the Regal Apartments fire on Wednesday has been declared as “undetermined.” According to CFD Fire Chief Craig Matthews and Captain David Hodges, investigators from the CFD Fire Prevention Bureau say they were not able to determine a cause due to the “extensive damage […]
CHARLESTON, WV・2 DAYS AGO
WOWK 13 News

CHARLESTON, WV (WOWK) – With nearly 100 people displaced after the devastating fire that destroyed the Regal Apartments on Wednesday, local organizations and the Charleston community are all working to help their neighbors who are now in need of help. The Charleston Police Department says next Friday, Feb. 3, 2023, they will be hosting a […]
CHARLESTON, WV・2 DAYS AGO
WOWK 13 News

Man arrested in West Virginia after fleeing from police, eating drugs he possessed

NICHOLAS COUNTY, WV (WOWK) — A man was arrested in the Leivasy, West Virginia, area after he drove under the influence (DUI), fled from police, and overdosed on drugs he possessed. According to Summersville Police Department (SPD), Cpl. Steven Mullins tried to stop a driver suspected to be under the influence on Saturday night. The […]
LEIVASY, WV・3 HOURS AGO
WOWK 13 News

HUNTINGTON, WV (WOWK) — Three out of four suspects allegedly connected to a November 2022 shooting that left one man dead in Huntington, West Virginia, were arrested on Friday. According to the Huntington Police Department, Christopher J. Johnson, 40, of Huntington, died following a shooting that happened at 6:09 p.m. Wednesday, Nov. 30, 2022, in […]
HUNTINGTON, WV・1 DAY AGO
WOWK 13 News

Sheriff RH Mellinger posted a statement on Facebook saying deputies responded to a call regarding a potential school shooting that had been planned at Ripley Middle School Monday.
JACKSON COUNTY, WV・42 MINUTES AGO
WOWK 13 News

CHARLESTON, WV (WOWK) – Officials have released a 911 call from a witness who saw the smoke coming from the Regal Apartments building in downtown Charleston on Wednesday. The once-thriving apartment building along Kanawha Boulevard is now a pile of rubble, changing the lives of the nearly 100 residents who lived there and lost everything […]
CHARLESTON, WV・3 DAYS AGO
WOWK 13 News

WOOD COUNTY, WV (WOWK) — A pastor and his wife pleaded guilty on Friday to receiving thousands of dollars worth of pandemic unemployment benefits while employed. Court documents say Robert Notgrass, 51, was a pastor at a church in the Washington, West Virginia, area from Jan. 1, 2018, to June 1, 2020. The Department of […]
WOOD COUNTY, WV・2 DAYS AGO
WOWK 13 News

COAL GROVE, OH (WOWK)—A Coal Grove police officer was fired after he was seen on video drinking with at least five other people at a village-owned property. According to a Facebook release from the Village of Coal Grove, they were contacted by an anonymous person on Saturday, Jan. 21 who said they had video footage […]
COAL GROVE, OH・2 DAYS AGO
WOWK 13 News

How to help the Regal Apartments fire victims in Charleston, West Virginia

CHARLESTON, WV (WOWK) – On Wednesday, the residents of the Regal Apartment building in downtown Charleston lost their home in a devastating fire. While officials said all of the nearly 100 residents were safely accounted for, they lost all of their belongings, and are now picking up the pieces to start over. The Red Cross […]
CHARLESTON, WV・3 DAYS AGO
WOWK 13 News

INSTITUTE, WV (WOWK) — An officer charged in relation to Tyre Nichols’ death graduated from West Virginia State University (WVSU) in 2013, according to online school records. Desmond A. Mills Jr., 32, majored in criminal justice and law enforcement at WVSU. The school’s Football Roster shows that Mills was No. 78 for the WVSU Yellow […]
INSTITUTE, WV・7 HOURS AGO