Elliott Davis is alive and well, despite fake news 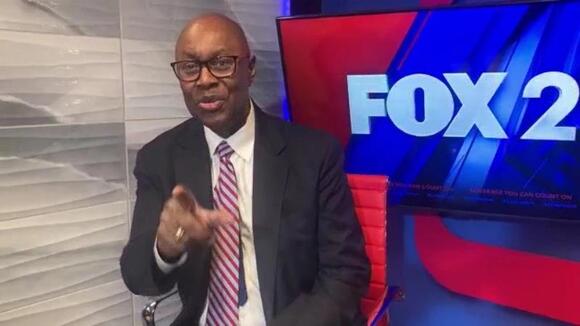 ST. LOUIS, Mo. – Elliott Davis is very much alive. We just took a picture of him in the FOX 2 Newsroom holding up today’s paper to prove it.

FOX 2 has reached out to the page to ask them why they would post something like that. They sent this comment in a Facebook message, “To make a point about media literacy, common sense, and because it’s kinda funny to laugh at people who believe everything they read on Facebook. We wish no actual ill will towards Elliott or anyone affiliated with KTVI or Nexstar.”

Davis was shocked to hear the news that he passed away.

“Well, it was strange because a friend I hadn’t heard from in more than a half a year called me. The first thing she said was, ‘you’re alive.’ I said, ‘well, yeah, I think so.’ She said that she had seen something posted on social media. That said I had passed away.’ That was the first I had heard about it.

Then, when I got to work, I got a call from my daughter. She’s on tour with the production in Germany. She said, ‘Dad, are you OK?’ And I said, ‘I think so.’”

You can see Elliott Davis anchoring the news today. He also has a new “You Paid For It” report airing tonight.

Missouri’s own Mark Twain is also got to comment on his own death . A report from New York started going around that he was near death in London. That report was based on his brother, who was sick at the time.

Emergency crews are at the scene of a fatal two-car crash Tuesday morning.
SAINT LOUIS, MO・1 DAY AGO
FOX 2

A St. Charles man died after a crash late Monday evening on Interstate 70, according to the Missouri State Highway Patrol.
SAINT CHARLES, MO・1 DAY AGO
FOX 2

He was one of the most popular teen idols in the history of entertainment. As the star of the 1970s hit TV series, The Partridge Family, he rocketed to fame and then died too young.
3 DAYS AGO
FOX 2

At the start of Tuesday night, everyone knew there would be a guaranteed millionaire at the Queen of Hearts drawing in Waterloo, Illinois, but no one knew how long it would take.
WATERLOO, IL・15 HOURS AGO
FOX 2

Poor road conditions are being blamed for a St. Louis woman's death on a central Missouri highway.
MORGAN COUNTY, MO・2 DAYS AGO
FOX 2

The Major Case Squad of Greater St. Louis has been activated to investigate a homicide case in Berkeley.
BERKELEY, MO・1 DAY AGO
FOX 2

Teen in custody for carjacking outside St. Louis church

A teenager is in custody in connection with a recent carjacking outside a south St. Louis church.
SAINT LOUIS, MO・1 DAY AGO
FOX 2

The mayor of East St. Louis reacts to the shooting at a church in his city this past weekend.
EAST SAINT LOUIS, IL・1 DAY AGO
FOX 2

A new suburban stadium could be on the horizon for the Chicago Bears, though it appears some Illinois representatives are not quite on board with that prospect.
CHICAGO, IL・1 DAY AGO
FOX 2

16-year-old killed at East St. Louis church was there with his mother

The pastor at an East St Louis church where a teenager was killed in a shootout on Sunday says he’s never seen violence at the house of worship in his 16-year tenure.
EAST SAINT LOUIS, IL・19 HOURS AGO
FOX 2

While Missouri Amendment 3 permits marijuana use in private residences, it’s still against the law in parks, while walking along sidewalks, and in schools, both private and public.
MISSOURI STATE・1 DAY AGO
FOX 2

CHICAGO — Chicago Blackhawks great Bobby Hull has died at the age of 84, according to the Daily Herald. Hull is the Blackawks’ all-time leading scorer. “The Golden Jet” helped lead the team to a Stanley Cup title in 1961. He is considered one of the best hockey players of all-time with 1,170 career points […]
CHICAGO, IL・2 DAYS AGO
FOX 2

One of two men convicted of smuggling 100 pounds of methamphetamine to the St. Louis area from Colorado was sentenced Tuesday.
SAINT LOUIS, MO・21 HOURS AGO
FOX 2

The Missouri Lottery is looking for two Powerball players who won large prizes over the weekend.
SAINT LOUIS, MO・2 DAYS AGO