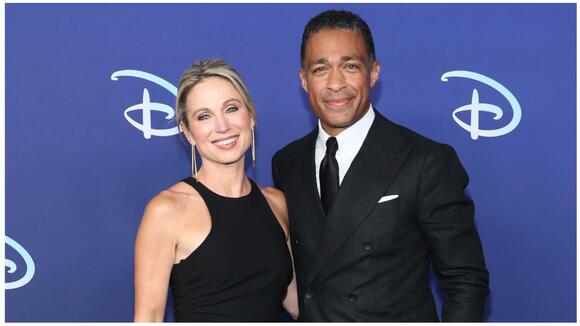 ABC News has taken a pair of daytime news personalities off the air after reports of a romantic relationship between the two anchors surfaced.

Colleagues Amy Robach and T.J. Holmes, who are both anchors of ABC’s “GMA 3” afternoon show have been taken off the air by network President Kim Godwin while the outlet decides how to handle fall out from the alleged off-air relationship and the widespread attention it has caused, The Hill has learned.

During the network’s 9 a.m. editorial call on Monday, Godwin addressed reports of the relationship, calling them “an internal and external distraction.”

“And I want to say that while that relationship is not a violation of company policy, I have really taken the last few days to think about and work through what I think is best for the ABC News organization,” Godwin said on Monday’s call. “So for now, I’m going to take Amy and T.J. off the air while we figure this out.”

Robach and Holmes, who are both married, have been the focus of intense tabloid covera ge in the last several days, with Page Six, the Daily Mail and others snapping pictures of the two in bars and other public places.

Neither host has explicitly acknowledged the relationship on air.

Freezing temperatures are on the way, which can pose a risk for your home's plumbing.
CHICOPEE, MA・2 DAYS AGO
WWLP

The man charged in a shooting death at the Holyoke Mall on Saturday had a license to carry (LTC) a gun according to court records.
HOLYOKE, MA・2 DAYS AGO
WWLP

A Springfield man was sentenced to jail in connection with stabbing two people in Northampton.
NORTHAMPTON, MA・2 DAYS AGO
Distractify

“King of Pop” Michael Jackson’s family has been all over the news lately. The late pop star’s ex-wife Lisa Marie Presley passed away on Jan. 12. His daughter, Paris Jackson, attended the Los Angeles premiere of the documentary Pamela, a love story on Monday, Jan. 30. And that same day, Michael’s son Prince Jackson congratulated cousin Jaafar Jackson on his role as the “Thriller” singer in the upcoming biopic Michael. But what about Michael’s other son? Where is Blanket Jackson now?
LOS ANGELES, CA・2 DAYS AGO
Grazia USA

Gisele Bündchen is getting back to business. This week, the supermodel was seen hitting the beach in Florida for a new photo shoot — and she’s been posing in a slew of sizzling looks. In new photos, the model wore a cotton-candy pink Chanel backless one-piece swimsuit with a scoop neckline and an interlocking-double C... The post Gisele Bündchen Is Back to Her Supermodel Ways in New Swimsuit Photos appeared first on Grazia USA.
FLORIDA STATE・2 DAYS AGO
WWLP

That massive fire in the North End of Springfield on Saturday night forced a childcare facility to relocate.
SPRINGFIELD, MA・2 DAYS AGO
WWLP

The brutal cold can cause problems for your car.
CHICOPEE, MA・2 DAYS AGO
WWLP

"What I think most of our homeowners are dealing with is private and behind a lot of doors," Lynnea Katz-Petted said.
MILWAUKEE, WI・1 DAY AGO
WWLP

The Hampden District Attorney's Office unveiled a tank top that was found in the Brimfield woods area that may be connected to the Holly Piirainen homicide case.
BRIMFIELD, MA・2 DAYS AGO
WWLP

Two Springfield officers were struck and killed by a train 83 years ago.
SPRINGFIELD, MA・13 HOURS AGO
WWLP

These Western Massachusetts schools closed Friday due to frigid weather

All Springfield and Holyoke Public Schools will be closed Friday due to incoming frigid weather.
HOLYOKE, MA・7 HOURS AGO
WWLP

An outpouring of support is coming from those mourning the death of the Holyoke Mall shooting victim, Trung Tran. A GoFundMe, with a goal of raising $20,000, has been set up to pay for Tran's funeral expenses.
HOLYOKE, MA・2 DAYS AGO
WWLP

The Holyoke Fire Department was sent to 80 Hitchcock Street for a house fire Wednesday morning.
HOLYOKE, MA・1 DAY AGO
WWLP

The Westfield Air Show returns in May but something new this year is that parking will not be free.
WESTFIELD, MA・2 DAYS AGO
WWLP

The Biden administration has blocked a controversial proposed gold and copper mine in Alaska in order to protect the world’s largest sockeye salmon fishery.  The Environmental Protection Agency (EPA) blocked construction for the Pebble Mine, citing its potential impact on Bristol Bay — a southwestern Alaska watershed that’s home to numerous animal species including the salmon.  […]
ALASKA STATE・2 DAYS AGO
WWLP

A man from Heath was sentenced to jail Tuesday after a plea hearing in connection with attacking two friends in 2020.
FRANKLIN COUNTY, MA・2 DAYS AGO