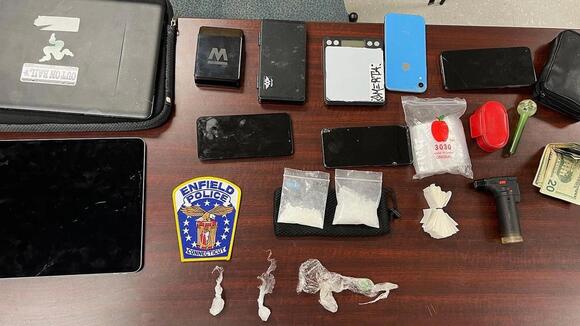 ENFIELD, Conn. (WWLP) – Two people have been arrested after drugs were found inside a stolen vehicle early Monday morning.

According to Enfield Police, an officer was conducting business patrols overnight at a local hotel when they saw a vehicle running in the parking lot. The vehicle had a misuse of registration plates, and was later identified as stolen.

The operator of the vehicle allegedly attempted to provide the officer with a fake identification but an investigation revealed the person’s real name, who was then discovered to have several active warrants. The driver, 31-year-old David Guilmartin of Glastonbury, and another person, 26-year-old Gabriella Molloy of West Suffield, were arrested for possession of narcotics with the intent to sell.

Guilmartin was held on a $75,000 bond and has been charged with the following:

Molloy was held on a $50,000 bond and will be charged with the following:

A Springfield man was arrested in Chicopee for illegal possession of a firearm and drugs after a report of shots fired Saturday.
CHICOPEE, MA・18 HOURS AGO
WWLP

Sturbridge and Ware police are asking for the public's help in identifying two people that used fake money at a business.
STURBRIDGE, MA・21 HOURS AGO
WWLP

A Springfield man is facing firearm and drug charges after a search warrant was conducted Saturday.
SPRINGFIELD, MA・22 HOURS AGO
WWLP

The West Springfield Police are asking for the public's help in identifying a suspect wanted in connecting with stealing from a business.
WEST SPRINGFIELD, MA・18 HOURS AGO
WWLP

Chicopee Police were investigating a 911 call Saturday where a toy gun could have been mistaken for a real firearm.
CHICOPEE, MA・20 HOURS AGO
WWLP

The Massachusetts State Police are searching along the Westfield River on Tuesday for a man who they say ran away from police during a traffic stop.
WESTFIELD, MA・1 HOUR AGO
WWLP

One person was injured in Elliot Street shooting in Springfield

A man was injured in a shooting on Elliot Street Sunday afternoon.
SPRINGFIELD, MA・1 DAY AGO
WWLP

One man killed after multi-car crash in Springfield

One man has died as a result of a multi-car crash in Springfield early Sunday morning.
SPRINGFIELD, MA・1 DAY AGO
WWLP

The 22News I-Team takes a look at how people are getting illegal glock switches that can turn a hand gun into an automatic weapon.
SPRINGFIELD, MA・17 HOURS AGO
WWLP

It's been just over two weeks since a Springfield man has gone missing in the eastern part of the state. Monday evening, 22News heard from his wife who is asking the public for help to find him.
SPRINGFIELD, MA・11 HOURS AGO
WWLP

18-year-old flown to hospital after car crash in Holland

One person was flown in a helicopter to a hospital after a car accident on Sturbridge Road on Sunday.
HOLLAND, MA・1 DAY AGO
WWLP

TRAFFIC: Lights at intersection in Agawam are flashing due to crash

The lights at the intersection of North Westfield Street, North Street, and North Street in Agawam are on flash.
AGAWAM, MA・23 HOURS AGO
WWLP

GoFundMe created for family of infant that died in Southwick accident

An infant was killed after a tree came crashing down on a car while driving on Route 57 late that morning. Now, efforts are underway to support the grieving families.
SOUTHWICK, MA・17 HOURS AGO
WWLP

The West Springfield Fire Department was sent to Ballard Truck Center on Sunday for a working fire.
WEST SPRINGFIELD, MA・1 DAY AGO
WWLP

Brattleboro Road back open after a vehicle fire in Bernardston

The Bernarston Fire Department is currently working on a vehicle fire on Brattleboro Road.
BERNARDSTON, MA・2 DAYS AGO
WWLP

Chicopee firefighters were responding to a house fire on Cobb Avenue in Chicopee Saturday afternoon around 2:30 p.m.
CHICOPEE, MA・2 DAYS AGO
WWLP