3 NBA backcourt players who could be first-time All-Stars, including Tyrese Haliburton 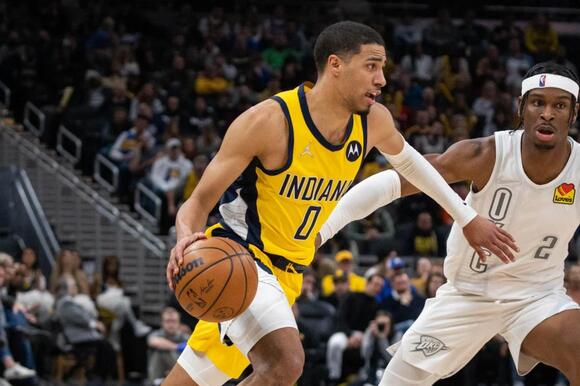 The 2022-23 NBA season has wrapped up its first month, and things have become more compelling. Basketball’s biggest mid-year events are also slowly approaching, that includes the 72nd NBA All-Star Weekend in Utah next year, which could see several first-time participants, such as Tyrese Haliburton.

The talent in today’s league has evolved and is more exciting, and there have been plenty of outstanding performances from different backcourt players. With the amount of perimeter performers, fans and media are in a burdensome situation to give out roster spots in the All-Star games to those who precisely deserve it. There are, of course, players who are locked to get roster spots in one of the colossal events of the NBA season.

Stephen Curry, Ja Morant, and Trae Young are already sure guards to be named All-Stars due to their performances and status around the league. Due to the multiple All-NBA talent around the league, it’s hard to narrow it down to decide which players should make the All-Star game. Still, we’ve been able to scout three backcourt players who should play alongside the best on February 19, 2023.

Tyrese Haliburton is in another world in 2022

The Indiana Pacers have done a tremendous job of incorporating Tyrese Haliburton into their system this year. The 2022-23 NBA year marks his first complete season with the Pacers after he was traded by the Sacramento Kings a year ago.

He’s been effective as the team’s point guard, leading them to the 5th seed in the Eastern Conference so far. Haliburton is also a candidate to win the Most Improved Player award.

Through 22 games, the 6-foot-5 guard is averaging 19.1 points, 4.7 rebounds, and 10.9 assists, which makes him the current league leader in the passing department. Haliburton is shooting 46.1% of his shots from the field and 36.9% of his three-pointers. Aside from his impressive offensive outing, the third-year guard out of Iowa State has also improved his defense this year.

The 22-year-old guard is snatching the ball from opponents 1.8 times per game. During his third appearance, Haliburton had five steals that helped the Pacers get their first win of the year. He’s one of the substantial reasons for where Indiana is right now, and he deserves a roster spot among the Eastern Conference All-Stars.

The Sacramento Kings have been playing unbelievable basketball. With a new head coach in Mike Brown, things are starting to come together, and their hopes of returning to the postseason are very much alive.

De’Aaron Fox has plenty to do with the team’s success, as he’s developed into a mature leader for the Kings. Fox is responsible for how Sacramento has been playing this season, and they have a real shot at being a playoff squad.

The speedy guard has spent his first five seasons with the team that drafted him and has been patient in their rebuild, which is starting to pay off. The front office has finally surrounded Fox with capable players who have helped him take the Kings to a different level. The former Kentucky guard is averaging 23.5 points, 5.0 rebounds, and 5.9 assists. The 6-foot-3 guard is shooting 52.2% of his field goal shots and a career-best 38.4% of his attempts from the three-point arc.

With Fox’s evolution as the Kings’ leader, he led them to a 13-9 record in the Western Conference. He’s also a sizeable contributor during their seven-game win streak. The 25-year-old guard averaged 25.1 points, 4.6 rebounds, 8.3 assists, and 2.0 steals during that seven-game span .

The third guard who deserves an All-Star spot is Shai Gilgeous-Alexander. Despite the lack of team success of the Oklahoma City Thunder, SGA will be a name making a buzz once All-Star fan voting starts. Out of the three players on this list, he’s shown the most improvement in scoring the ball. Yet, the competition in the West has made it difficult for the Thunder to have a decent place in the standings, as OKC is currently in the 13th seed with a 10-13 record.

SGA has surprised everyone with his increased volume in scoring. He’s been averaging 31.1 points, 4.7 rebounds, and 6.0 assists on 50.9% shooting from the field and 34.4% from beyond the arc. If only they were getting more wins, Gilgeous-Alexander would be in the top five in the MVP race , giving Luka Doncic and Jayson Tatum a run for their money. The 24-year-old guard is currently third in points per game and one of five players averaging at least 30 a game.

The Thunder guard has already had 15 instances where he scored at least 30 or more points, solidifying his case as an All-Star guard. NBA legend Charles Barkley has also shared his opinion on SGA’s All-Star status, believing the 6-foot-6 guard should have a spot on the roster as well.

Related: 5 NBA players who are carrying their teams in 2022

The Indiana Pacers are quickly approaching the NBA’s trade deadline. And decision time has arrived on their direction for the
INDIANAPOLIS, IN・1 DAY AGO
Sportsnaut

Wednesday’s game between the Washington Wizards and host Detroit has been postponed after the Pistons experienced travel issues following their
DETROIT, MI・52 MINUTES AGO
Sportsnaut

The Dallas Mavericks find themselves at a crossroads leading up to the Feb. 9 NBA trade deadline. Dallas heads into
DALLAS, TX・1 DAY AGO
Sportsnaut

After finishing second in the Western Conference a year ago, the Memphis Grizzlies are back on top in 2023. Well,
MEMPHIS, TN・15 HOURS AGO
Sportsnaut

The Memphis Grizzlies will aim to continue their torrid play at home on Wednesday night when they host the Portland
PORTLAND, OR・21 HOURS AGO
OnlyHomers

World Wrestling Entertainment (WWE) star Hulk Hogan is "paralyzed" from the waist down, at least according to another legendary wrestler, it has been revealed. Kurt Angle, speaking on an episode of his top-rated podcast on Sunday, said that he and Hogan, 69, spoke backstage when they both appeared at the 30th Anniversary special for WWE’s program “Monday Night Raw.”
1 DAY AGO
Sportsnaut

Guard Brittney Sykes signed a three-year contract with the Washington Mystics on Wednesday. Financial terms were not disclosed by the
WASHINGTON STATE・1 HOUR AGO
Sportsnaut

5 trades the Indiana Pacers should make

The Indiana Pacers are fast approaching the NBA trade deadline. They recently came to terms with center Myles Turner on
INDIANAPOLIS, IN・2 DAYS AGO
Sportsnaut

The New York Knicks and Phoenix Suns are reportedly two of the teams in hot pursuit of one of the
NEW YORK CITY, NY・3 HOURS AGO
Sportsnaut

Courtney Vandersloot will not return to the Chicago Sky, the free agent guard announced Tuesday on social media. Vandersloot, who
CHICAGO, IL・13 HOURS AGO
Sportsnaut

NBA trade rumors are heating up as the Feb. 9 deadline approaches. As usual, the New York Knicks find themselves
NEW YORK CITY, NY・21 HOURS AGO
Sportsnaut

Nikola Jokic had 26 points, 18 rebounds and 15 assists for his NBA-leading 16th triple-double, while Jamal Murray poured in
DENVER, CO・12 HOURS AGO
Sportsnaut

The Sacramento Kings will shoot for another win on the road in their transcendent season when they square off against
SAN ANTONIO, TX・17 HOURS AGO
Sportsnaut

As of this publishing, the Boston Celtics have the best record in the NBA, and they’re already coming off an
BOSTON, MA・15 HOURS AGO
Sportsnaut

With Luka Doncic, the Dallas Mavericks have one of the best young players in basketball. But the Slovenian legend needs
DALLAS, TX・17 HOURS AGO
Sportsnaut

Nets hoping for reinforcements against Celtics

The Brooklyn Nets could get some reinforcements for Wednesday’s road game against the Boston Celtics. Ben Simmons (knee) and T.J.
BOSTON, NY・21 HOURS AGO
Sportsnaut

Jalen Wilson recorded 20 points and eight rebounds to help No. 8 Kansas notch a 90-78 victory over No. 7
LAWRENCE, KS・12 HOURS AGO
Sportsnaut

Jordan Hawkins scored a game-high 26 points and Adama Sanogo finished with 25 to help No. 24 Connecticut extend its
CHICAGO, IL・14 HOURS AGO