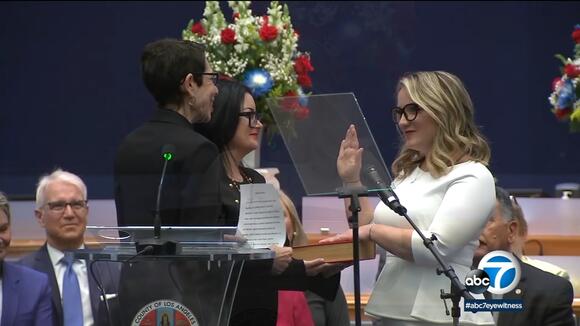 Lindsey Horvath and Hilda Solis took their oaths of office for the Los Angeles County Board of Supervisors Monday -- Horvath debuting on the county's governing body as its youngest-ever elected woman, while the political veteran Solis begins her third and final term. Solis got the spotlight first on Monday during a 10 a.m. ceremony in the Board of Supervisors Meeting Room of the Kenneth Hahn Hall of Administration in downtown L.A. Horvath was sworn in during a noon ceremony in the same location. Horvath, a former member of the West Hollywood City Council and twice the mayor of that city, beat state Sen. Bob Horvath in a runoff election last month for the 3rd District seat that is being vacated by Sheila Kuehl, who did not seek reelection. "She really proved herself so capable for this new place," Kuehl said. Horvath is the youngest woman in history elected to the board at the age of 40. All five seats on the Board of Supervisors are held by women. "She also has the shared values that I do. She cares about the environment, she cares about equality," Solis said. Solis -- who served in both the Assembly and state Senate before moving to Congress and later becoming U.S. Secretary of Labor under President Barack Obama -- easily defeated four challengers in the June primary to claim her third term representing the 1st District. Term limits make Thursday's oath Solis' last as a supervisor. An incumbent supervisor has not lost a reelection bid for 42 years. Horvath claimed victory over Hertzberg on Nov. 17, ultimately winning by nearly 29,000 votes, or just under 53% after all the ballots were counted. "I am humbled and honored that the voters have chosen me to serve as their next supervisor," Horvath said. "Their confidence and support fueled our people-powered campaign across the finish line, and I could not be more grateful for the opportunity to represent the people of District 3." Horvath also pledged to make reducing homelessness one of her priorities -- as it was in West Hollywood -- while touting her credentials and a millennial and a renter. "The significance of this victory is not lost on me," she said. "Voters chose a new path forward -- a path where we humanely and effectively solve our homelessness crisis, a path where we invest in meaningful public safety solutions, a path where we fight unequivocally for full reproductive freedom, and a path where we urgently protect our environment and create a sustainable future for generations to come." The board achieved that all-female status in 2020, when Holly Mitchell defeated then-L.A. Councilman Herb Wesson to succeed Supervisor Mark Ridley-Thomas, who was prevented from running for reelection because of term limits. "I would not be here without the countless women that paved this path for me today," Horvath said. "I especially want to thank Supervisor Sheila Kuehl for her support and confidence. Because of them, I will soon become the youngest elected woman to serve on the Board of Supervisors, while maintaining the all-female board that we fought so hard to gain. "At this critical juncture in Los Angeles' history," she added, "I am proud to bring a new perspective to the board as a renter, as a millennial, and as a staunch believer that the solutions we are looking for are rooted right in our own communities." Horvath had been a member of West Hollywood's City Council since 2015 and was its mayor from 2015-16 and 2020-21. Her 3rd District covers a majority of the San Fernando Valley, stretching from Westlake Village and Malibu to Calabasas, West Hills, Porter Ranch, San Fernando, Panorama City and Northridge. It also includes West Hollywood, Beverly Hills and Santa Monica. The district's boundaries changed dramatically during the county's most recent redistricting effort, giving it a larger swath of the Valley. Solis, 65, a former supervisors chair, was first elected to the board in 2014 after serving in the U.S. House of Representatives from 2001-2009, then as Obama's labor secretary from 2009-2013 -- becoming the first Latina to hold a presidential cabinet post. Previously, she was a state senator from 1994-2000, and a member of the Assembly from 1992-1994. "My priorities continue to be mitigating the impacts of the COVID-19 pandemic, expanding affordable housing and healthcare for all, creating good-paying local jobs, improving access to parks and open space, enhancing veterans' services and making our neighborhoods safer through community based crime prevention," Solis said in her official candidate statement. In winning a third term in the June 7 primary, Solis rolled to a landslide victory by capturing nearly 76% of the 1st District ballots cast. Her 166,858 votes were more than double the total of her four challengers combined. She beat back La Puente City Councilman David Argudo, businessman Kevin Dalton, county sheriff's Deputy Brian Smith and businesswoman Tammy Solis. On her county website, Solis touts the accomplishments of her first two terms by saying she "accelerated the county's efforts to combat homelessness and allocated funding to build thousands of affordable housing units in her district and around the county." In addition, Solis said, she "authored the groundbreaking Measure A to invest in communities without green space, expand open and recreational park space in their neighborhoods, and protect water quality" -- and is "leading the effort to reimagine public safety in Los Angeles County and prioritize expanding healthcare and jobs instead of mass incarceration, leading the effort to cancel a $1.7 billion contract to build a new jail." Solis' 1st District 1 seat represents an eastern swath of the county, including Monterey Park, Azusa, Pomona, Diamond Bar, Rosemead, West Covina, Highland Park and Lincoln Heights. City News Service, Inc. contributed to this report.

'We are not where we should be.' Experts weigh in on crime data systems across SoCal and the US

Our new Neighborhood Safety Tracker gathers crime and safety information across Southern California. But how is all that data reported, and why do some agencies have more up-to-date data than others?
LOS ANGELES, CA・2 HOURS AGO
ABC7

A week after the slaying of 11 people at a Monterey Park dance studio, the neighboring city of Alhambra held a daylong Lunar New Year festival Sunday, including a special ceremony honoring the man who disarmed the Monterey Park gunman.
ALHAMBRA, CA・1 DAY AGO
ABC7

The Benedict Canyon homeowners association said this was the third time homicides have occurred at short-term rentals in their neighborhood in the past two-and-a-half years.
LOS ANGELES, CA・2 HOURS AGO
ABC7

The city of Pasadena is conducting the annual count of its homeless population, but it's not just about numbers. It's also providing people with medical services and other assistance.
PASADENA, CA・4 DAYS AGO
ABC7

For artist Jonathan Chang, the mass shooting in Monterey Park hit close to home. He's hoping to raise awareness about who the victims were through his art.
MONTEREY PARK, CA・4 HOURS AGO
ABC7

The homeless population in three of Los Angeles' high-priority neighborhoods has increased by an average of 18%, according to a yearlong count conducted by the RAND Corporation.
LOS ANGELES, CA・2 DAYS AGO
ABC7

Police responded to three different gunman scares at Walmart locations in Los Angeles County over the weekend, but they all turned out to be hoaxes.
LOS ANGELES COUNTY, CA・6 HOURS AGO
ABC7

The Los Angeles County Board of Supervisors extended by two months its tenant protections against eviction for those impacted by COVID-19, while also establishing a $45 million relief fund for landlords.
LOS ANGELES COUNTY, CA・5 DAYS AGO
ABC7

Vice President Kamala Harris traveled to Monterey Park to meet with victims' families days after a mass shooter there killed 11 and wounded at least nine others inside a dance studio.
MONTEREY PARK, CA・4 DAYS AGO
ABC7

Those killed by a gunman who opened fire at a Monterey Park dance hall are being remembered by friends and family for the zest for life that brought them out that night to celebrate the Lunar New Year.
MONTEREY PARK, CA・3 DAYS AGO
ABC7

Activists took to the streets of Los Angeles to protest police brutality after the release of video showing the fatal beating of Tyre Nichols at the hands of former Memphis police officers.
LOS ANGELES, CA・2 DAYS AGO
ABC7

Recent slayings moved California up five slots to 26th place on the number of fatal mass shootings per capita in the U.S. since 2006.
HALF MOON BAY, CA・5 DAYS AGO
ABC7

Video of a driver defending his rights as he denied a Costa Mesa police officer access to a vehicle for a search has gone viral on social media.
COSTA MESA, CA・2 DAYS AGO
ABC7

A radio-collared mountain lion known as P-81 was found dead on Pacific Coast Highway in the western Santa Monica Mountains after likely being struck by a vehicle.
SANTA MONICA, CA・2 DAYS AGO
ABC7

The Tesla driver allegedly involved in a series of road-rage attacks in Southern California has been arrested, authorities said Monday.
TORRANCE, CA・8 HOURS AGO
ABC7

The family of a woman who died during childbirth earlier this month in Inglewood is calling on the state to launch an independent investigation into her death.
INGLEWOOD, CA・1 DAY AGO
ABC7

The Monterey Park mass shooting has only sharpened residents' feelings about what makes the tight-knit community so special, and worth protecting.
MONTEREY PARK, CA・4 DAYS AGO
ABC7