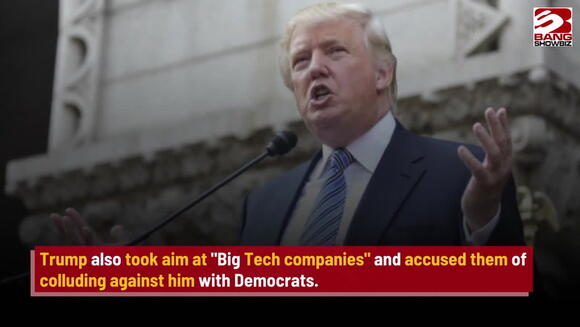 Former president Donald Trump claimed on Monday that he never advocated for an end to America’s constitution despite having called for its “termination” just days ago.

On Saturday, the twice-impeached ex-president took to his Truth Social platform to argue that social media platforms’ work with 2020 presidential campaigns (including his own) amounted to “ MASSIVE & WIDESPREAD FRAUD & DECEPTION in working closely with Big Tech Companies, the DNC, & the Democrat Party .” He also asked if the US should somehow discard the results of the election he lost or call a new election even though neither course is allowed under US law.

He continued his post by claiming that the “Massive Fraud of this type and magnitude” can permit the termination of all rules, regulations, and articles, even those found in the Constitution”.

The suggestion that the US Constitution should be terminated was met with widespread backlash, including from members of his own party.

Apparently in reaction to the criticism, Mr Trump took to Truth Social again on Monday to claim he had never said what he had said two days before.

He claimed that news organisations, who have accurately reported his words (which are still posted on Truth Social) are “ actually trying to convince the American People that I said I wanted to ‘terminate’ the Constitution” and called the accurate reporting of statements he has posted to the internet “disinformation and lies ”.

A few minutes later, Mr Trump wrote in another post on the site that an “irrefutably fraudulent ” election should “go to the rightful winner” or “should be redone”, even though there is no mechanism to do so under US law.

his post in his own words was still up...but somewhere someone believes he didn't say ( write) it.....sigh it's 2 friggin years already, why won't this cry baby just move on?Babble about 2024 and stop beating the dead horse of 2020 .

We all seen the tweet on truth social where he said the Constitution should be terminated ! We all seen it with are own eyes! Your not going to lie your way out of this Donnie !

Trump is so predictable, you can rest assured that what ever Trump says he will later deny.

Donald Trump gave an unsolicited review of Fox News show The Five in which he branded co-host Jessica Tarlov “absolutely terrible” and called her voice “grating and unendurable.”Tarlov, a former Democratic pollster, is one of the liberal voices on the show and was named a co-host in 2021.“I really like The Five on Fox News, especially the hosts, with the exception of wacky Jessica Tarlov, who is absolutely terrible,” the one-term president wrote on his Truth Social platform.“Her facts are knowingly wrong, her jittery presentation is horrendous and, forgive me, her VOICE is grating and unendurable.”Mr Trump went on to say that...
FLORIDA STATE・2 DAYS AGO
Newsweek

Fewer than one-third of Americans believe that House GOP leaders are prioritizing the country's most important issues, according to a new CNN Poll conducted by SSRS. Neither party's congressional leadership earns majority approval, and Republicans are particularly likely to express discontent with their own party leadership.
3 DAYS AGO
Gillian Sisley

A man who was visiting his extremely religious parents over the holidays has been shamed for ‘embarrassing them’ after they harassed him about his personal lifestyle. He has turned to Reddit to find out whether or not he was in the wrong for putting them on the spot.
3 DAYS AGO
Business Insider

Trump, who referred to Putin as a "genius" the week Russia invaded Ukraine, was once impeached over his dealings with Kyiv.
3 DAYS AGO
Eden Reports

Joe Biden Claims He Was in Office for 400 Years, News About Economy Can't Be Better, Inflation Decreasing Every Month

During Joe Biden's recent remarks on Thursday about the economic progress of the United States since he took office, he mentioned, "And, by the way, in case you were wondering, I’ve been saying this for the last 400 years I’ve been in office."
3 DAYS AGO
The Independent

Donald Trump reportedly made a secret $1m donation to a partisan-driven“audit” of Arizona’s election results in his efforts to overturn the 2020 presidential election.According to The Guardian, it was Mr Trump who largedly bankrolled the discredited review of election results which the president hoped would support his baseless claims that the election was “stolen” from him and swing the outcome in his favour. The revelation comes as it also emerged that Mr Trump’s attorney John Eastman is facing disciplinary charges and potential disbarment in California over his involvement in the former president’s efforts to overturn the 2020 election.This weekend,...
ARIZONA STATE・1 DAY AGO
Newsweek

The Mil Mi-8 helicopter hit the ground at Vnukovo airport with its blades and tail, Russian media reported.
1 DAY AGO
The Independent

The White House defended President Joe Biden’s record on attempting to curb police brutality as the Memphis Police Department prepares to release the video of officers in a deadly confrontation with Tyre Nichols. Police in Memphis will on Friday release body-camera footage of the violent arrest of Nichols, 29, who died three days after police beat him severely during a traffic stop. The department fired the five officers involved in the stop and they now face murder charges. Mr Biden called for peaceful protests ahead of the video and repeated his calls for Congress to pass the George Floyd...
MEMPHIS, TN・2 DAYS AGO
The Independent

Rollan Roberts II’s longshot bid the White House got off to an inauspicious start when his wife collapsed on to the floor in the middle of his kickoff speech. Ms Roberts, who is pregnant with the couple’s first child, was standing by as Mr Roberts detailed why Americans might consider him for the presidency in 2024, until she wobbled slightly and fell to the ground. Rollan Roberts II announces he is running for president this week, when his five-months pregnant wife passes out. She was fine, and Roberts was obviously highly concerned. Hell of a start to Rollan Roberts 2024!...
WEST VIRGINIA STATE・3 DAYS AGO
Eden Reports

In a recent speech, President Joe Biden stated that he had added more to the national debt of the United States than any other president in history, saying, "No President added more to the debt in 4 years than my President… I misspoke - 25% of our country’s entire debt."
12 HOURS AGO
Toby Hazlewood

On January 26, the House of Representatives voted on an amendment proposed by Georgia's most controversial and divisive Republican - Marjorie Taylor-Greene. The proposal was intended to prevent the Biden Administration from selling oil from the Strategic Petroleum Reserve.
GEORGIA STATE・2 DAYS AGO
Wild Orchid Media

The link to the article was found during an internet archive search of Clark’s personal website for the weeks leading up to her becoming the Democrats’ new House Whip earlier this month.
BOSTON, MA・2 DAYS AGO
The Independent

Rishi Sunak has said that the “hearts of the British people” are with Ukraine in a surprise intervention on the war.The prime minister also paid tribute to the ongoing bravery of ordinary Ukrainians.With just weeks to go before the first anniversary of the conflict, Mr Sunak reiterated his pledge that the UK government would stand with Ukraine “for as long as it takes”.His renewed support for the people of Ukraine came as he passed a personal message to the Ukrainian ambassador to pass onto to President Zelenskyy and the people of Ukraine at a fundraiser at the Royal Academy...
1 DAY AGO
The Independent

A four-star US Air Force general has said that Washington is expecting a potential war with China in 2025 and asked his commanders to prepare for battle by aiming “for the head”.General Mike Minihan, the head of the Air Mobility Command, said the US’s main goal should be to deter “and, if required, defeat” China, in a shocking internal memorandum signed off by him and confirmed to be genuine by the Pentagon.The memo, which has been circulating on social media, was first reported by NBC News and is dated 1 February of this year. It contains several pointers, including...
WASHINGTON STATE・1 DAY AGO
The Independent

Donald Trump Jr has been ridiculed after seemingly falling for a parody Twitter account that called for Aretha Franklin’s “Natural Woman” to be banned. The account, The Trans Cultural Mindfulness Alliance (TCMA), which states that it’s run from Oslo, Norway, posted that the 1967 song was “offensive to trans women” and should be removed from Apple and Spotify but later added that the posts were “satire”. “There is no such thing as a ‘natural’ woman,” the post argued, adding that it “perpetuates multiple harmful anti-trans stereotypes” and that it has “helped inspire acts of harm against transgender women”.Albeit satirical,...
2 DAYS AGO
The Independent

Former UN Ambassador Nikki Haley took a veiled shot at both former President Donald Trump and President Joe Biden over their shared dreams of seeking the presidency in 2024.The ex-Trump administration official was being interviewed on Fox News when she took the opportunity to say that a “young generation” of leadership was needed in Washington.“I think we need a young generation to come in, step up and really start fixing things,” she said, adding: “Can I be that leader? Yes, I think I can be that leader.”The phrase has taken on sort of a double meaning in Washington; it...
SOUTH CAROLINA STATE・10 HOURS AGO
The Independent

She joined the women’s protests against the Taliban in Afghanistan. Now she’s wants the UK to take her in

On 15 August 2021, the Taliban came to power in Afghanistan. Two days later, Behishta joined the movement to resist them.A television journalist for Afghan broadcaster Noor TV, she had made a career from being outspoken on women’s rights and attracted criticism for her views.There was the time in 2018 when she decided to run a programme on virginity testing, a barbaric practice where women are subjected to a faux medical procedure to determine their virginity. Her critics rang in to complain that such a topic was being discussed in an Islamic country.Or the time when she ran a civil...
16 HOURS AGO