SEE IT: Mystery 80-foot-long object turns up on Florida beach 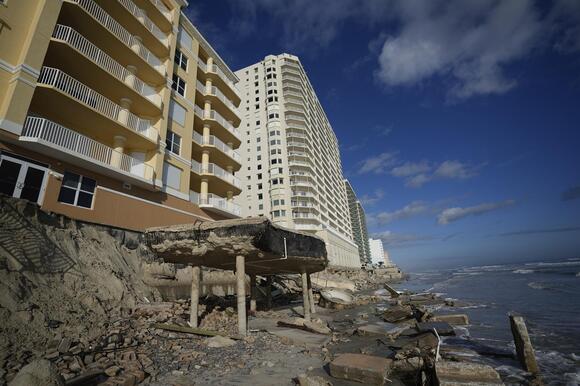 A large unidentified object has surfaced on the shores of Daytona Beach , Florida, after two major hurricanes eroded enough sand to expose the wooden contraption.

The object was discovered by members of Volusia County Beach Safety and recent beachgoers, county officials told the New York Times . The object appears to be made of wood and metal and stretches 80-100 feet long.

“It is a mystery,” Tamra Malphurs, a spokeswoman for Volusia County Beach Safety, told the outlet. “Many people think it is an old ship of some sort."

Other theories on the discovery that have circulated on social media are that the wood is a portion of an old pier, that it's a part of spectator seating that dates back to when NASCAR would race on the actual beaches of Daytona, or that it's part of a barrier, according to the outlet.

State archaeologists will investigate the object further during low tide on Monday afternoon.

It is unclear how old the object is, but the erosion caused by Hurricanes Ian and Nicole helped uncover the wooden debris.

“This erosion is unprecedented at this point. We haven’t seen this kind of erosion in a very long time,” Malphurs told WKMG Orlando. “I’ve been on the beach probably 25 years, and that’s the first time I’ve seen it exposed.”

Other mysterious items that turned up on the beaches in Florida in recent years include a relic from the 19th-century ship the Caroline Eddy and a rare gold coin that dates back to 1715.

"Every now and then, something pops up, and usually, you can tell what it is. This one, you just can’t confirm," Malphurs said.

The Washington Examiner has reached out to Volusia County Beach Safety for comment.

A man in Georgia was taken into custody after he allegedly tried to smuggle items such as drugs, jewelry, tobacco, and chicken wings into a local jail.
DEKALB COUNTY, GA・1 DAY AGO
Law & Crime

Famed NASCAR driver Kyle Busch has been sentenced to three-and-half-years in prison for gun possession without a license in Mexico, authorities there said late last week. It is not clear how, or if, that sentence will be assessed. According to a press release by Mexico’s Attorney General of the Republic...
NEVADA STATE・6 HOURS AGO
WashingtonExaminer

Supplemental Security Income beneficiaries are 23 days away from receiving the first of two payments in the month of March due to a scheduling quirk, worth $914 each.
WASHINGTON STATE・1 DAY AGO
WashingtonExaminer

The Washington Commanders appear more likely to be sold to a new owner in the offseason, after years of pressure for current owner Dan Snyder to sell the longtime struggling franchise.
WASHINGTON, DC・2 DAYS AGO
WashingtonExaminer

EXCLUSIVE — A new book by Christopher C. Miller, the acting secretary of defense in the final months of Donald Trump’s presidency, recounts his appointment to the post amid questions about his predecessor’s loyalty.
MONTANA STATE・2 DAYS AGO
WashingtonExaminer

The prominent conservative fundraising group Club for Growth has invited a slew of prospective GOP presidential candidates to its annual donor retreat next month, with one big name left off the guest list: former President Donald Trump.
INDIANA STATE・11 HOURS AGO
WashingtonExaminer

State of the Union 2023: Gingrich predicts Biden will give 'boring speech' full of 'untruths'

Stimulus update: 10 days left to claim checks worth up to $800 in South Carolina

The deadline for South Carolina residents to file their 2021 taxes and receive a rebate of up to $800 is in 10 days.
SOUTH CAROLINA STATE・2 DAYS AGO
WashingtonExaminer

Sen. Roger Wicker (R-MS), the ranking member of the Senate Armed Services Committee, slammed the Biden administration for its handling of the Chinese spy balloon on Saturday, which was successfully shot down Saturday afternoon.
MONTANA STATE・3 DAYS AGO
WashingtonExaminer

Stimulus update: Final wave of refund payments worth up to $1,050 to be issued within eight days

The final wave of the Middle Class Tax Refund will be paid to all California taxpayers in eight days.
CALIFORNIA STATE・1 DAY AGO
WashingtonExaminer

The deadline for South Carolina residents to file their 2021 taxes and receive a rebate of up to $800 will arrive in only eight days.
SOUTH CAROLINA STATE・8 HOURS AGO
WashingtonExaminer

Republicans blasted the Democratic National Committee on Saturday for breaking a decadeslong tradition by removing the Iowa caucus from the beginning of the primary season.
IOWA STATE・3 DAYS AGO
WashingtonExaminer

The U.S. military brought down the Chinese surveillance balloon on Saturday afternoon once it reached the Atlantic Ocean off the South Carolina coast after it traveled across the continental United States.
KANSAS STATE・3 DAYS AGO
WashingtonExaminer

Backstreet Boys band member Nick Carter is fighting back against allegations that he sexually assaulted several women over 20 years ago.
NEVADA STATE・2 DAYS AGO
WashingtonExaminer

The 6-year-old Virginia boy who shot and wounded his first-grade teacher allegedly choked another teacher "until she couldn't breathe," according to a legal notice filed by an attorney for the wounded teacher.
NEWPORT NEWS, VA・15 HOURS AGO
WashingtonExaminer

White House press secretary Karine Jean-Pierre heartily defended President Joe Biden's handling of the Chinese spy balloon that flew over parts of the United States throughout the past week.
ALASKA STATE・1 DAY AGO