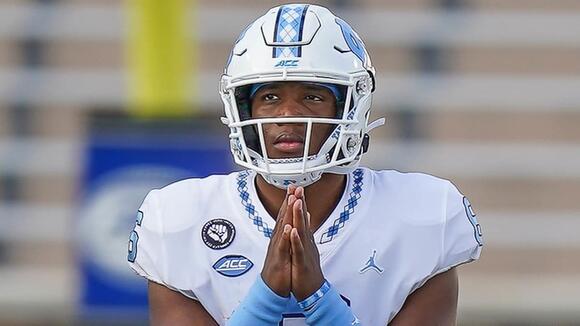 FAYETTEVILLE, Ark. — It probably shouldn't be that surprising that Jacolby Criswell is the first option to fill Arkansas' backup quarterback position.

The Morrilton native wasn't that hotly pursued in 2020 for whatever reasons. He went to North Carolina, spent a few years working with Mack Brown's staff and now is looking for a new home.

It could be coming home.

The Razorbacks have been an option on the table for awhile, according to multiple reports citing sources close to the situation.

KJ Jefferson's announcement last week he was staying with the Hogs for another year, which was good news. The biggest question all along is who will play behind him.

Rarely in the SEC does the starting quarterback make it through a 12-game schedule without getting nicked up along the way. Jefferson went through that most of last year, missing two games.

After Hornsby left with Cade Fortin out of years the coaches need some answer there.

It's a perfect fit for everybody.

Criswell plans to arrive in Fayetteville (Ark.) this Friday to begin his official visit.

Criswell backed up Heisman Trophy candidate Drake Maye this season and appeared in three games. He completed 1 of 5 passes for 4 yards, and rushed 2 times for 20 yards.

He has two seasons of eligibility remaining because of the extra year provided by the NCAA to players who competed in 2020 at the height of the covid-19 pandemic.

Criswell signed with the Tar Heels in 2020 as a consensus 4-star prospect. He also had offers from Arkansas, Georgia, Miami, Ole Miss, Auburn, Oklahoma State and other schools.

He appeared in six games as a true freshman in 2020. He completed 3 of 4 passes for 16 yards and was intercepted once that year, and had 9 carries for 26 yards.

Criswell, who placed seventh at the Elite 11 Opening Finals in high school, had 5,925 passing yards and 58 touchdowns, and 2,568 rushing yards and 41 touchdowns in 3 seasons at Morrilton. He was named Arkansas Gatorade Player of the Year as a senior in 2019.

The Razorback guard joined 'The Buzz' Thursday in a good spirits following the A&M game and ready to talk
FAYETTEVILLE, AR・2 HOURS AGO
All Hogs

With nine spots available, what he's looking find where he can get best players.
FAYETTEVILLE, AR・5 HOURS AGO
All Hogs

What were the circumstances and what was the most losses Arkansas has ever carried into March Madness?
FAYETTEVILLE, AR・9 HOURS AGO
All Hogs

Razorbacks Finally Manage to Close Out a League Win