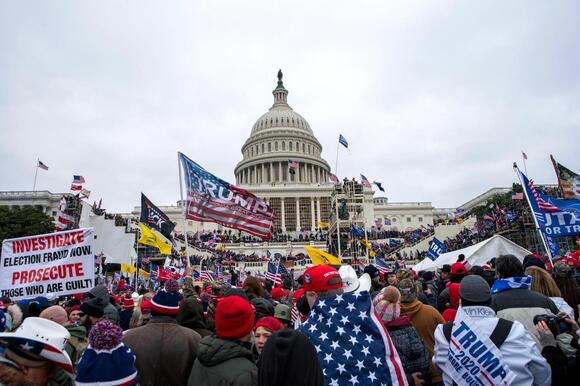 BOSTON (AP) — A Massachusetts ex-town official seen on surveillance video marching through the U.S. Capitol on Jan. 6, 2021, was sentenced to 15 days in prison for her role in the riot carried out by supporters of former Republican President Donald Trump to stop the transfer of presidential power to Democrat Joe Biden.

Suzanne Ianni , 60, who organized a bus trip to Washington, D.C., for fellow members of the right-wing group Super Happy Fun America, was also sentenced Friday to 30 days of probation. She pleaded guilty in September to a misdemeanor charge of disorderly conduct in a Capitol building.

Federal prosecutors had asked for a 30-day sentence and a year and a half of probation. Her defense sought a year of probation with no prison time, according to court records.

“Suzanne Ianni is devoted to her family, her community, and her country,” the defense wrote in a sentencing memorandum. “She was raised to have an abiding respect for law enforcement, and has had no prior contacts with the criminal court system.”

“Suzanne Ianni is a strong-willed person,” her attorney, C. Henry Fasoldt said in an email Monday. “She will serve her short sentence, then move on with her life.”

Ianni was an elected Town Meeting member in the Boston suburb of Natick while working with Super Happy Fun America, which gained national attention in 2019 for organizing a “Straight Pride Parade” in Boston.

On its website, the group describes itself as “a right of center civil rights organization focusing on defending the Constitution, opposing gender madness and defeating cultural Marxism.”

Ianni marched to the Capitol, and joined a crowd chanting, “Fight for Trump!” and “Our house!” while rioters near her broke windows, forced open doors and breached police barricades, prosecutors said. Ianni was seen on surveillance video marching through the Capitol after she entered the building through a Senate fire exit.

Nearly 900 people have been charged in connection with the Capitol breach.

riot🤣🤣🤣🤣. how about those mostly peaceful protests that took lives and did billions in damage

An Army veteran from Florida was sentenced on Thursday in federal court in Springfield for making threatening communications to the Department of Veterans Affairs.
SPRINGFIELD, MA・21 HOURS AGO
WWLP

The state police featured a playing card on social media Thursday with the unsolved case of a Ware victim.
WARE, MA・22 HOURS AGO
WWLP

State education officials use criteria that allows exclusionary admissions practices at vocational technical schools, leaving behind students of color, English language learners and students with disabilities, according to a new lawsuit filed by a coalition of educational advocacy groups.
MASSACHUSETTS STATE・1 DAY AGO
WWLP

Pawn Stars coming to Massachusetts in search of historical finds

Pawn Stars on the History Channel has announced they will be on the road with two stops in Massachusetts.
MASSACHUSETTS STATE・2 DAYS AGO
WWLP

A week after a $31 million ticket was sold in Belchertown, another person won $31 million.
WOBURN, MA・2 DAYS AGO
WWLP

It was very windy in Brimfield earlier Friday! The winds were strong enough to move a 22News viewer's horse trailer several feet from where it was parked.
BRIMFIELD, MA・8 HOURS AGO
WWLP

A club at Minnechaug Regional High School went above and beyond for a local behavioral health center.
WILBRAHAM, MA・1 DAY AGO
WWLP

The Palmer Fire Department were called to Beacon Drive for a report of a fallen tree on a house.
PALMER, MA・12 HOURS AGO
WWLP

Here are some reports of powerlines and fallen trees coming down in western Massachusetts.
MASSACHUSETTS STATE・13 HOURS AGO
WWLP

Second Chance Animal Services receives a $200,000 grant from PetSmart Charities to support the expansion of the surgical center.
SPRINGFIELD, MA・2 DAYS AGO
WWLP

The Holland Police Department says that Sturbridge Road is impassable due to a downed tree, utility pole and electrical wires.
HOLLAND, MA・12 HOURS AGO