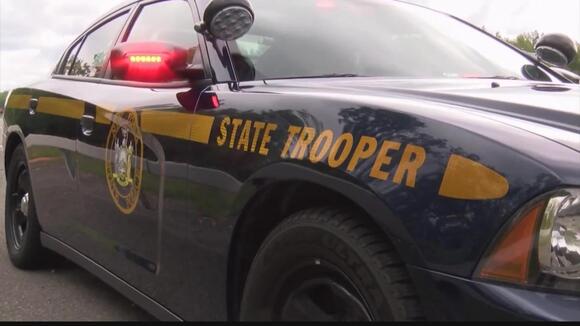 ARKWRIGHT, N.Y. (WIVB) — One person was killed in a two-vehicle crash on Saturday night in the Town of Arkwright, New York State Police announced Monday.

Police say a Chevrolet Trailblazer traveling southbound on Center Road failed to stop at a stop sign and struck a Ford F-150 traveling westbound on State Route 83. As a result of the collision, 71-year-old Linda Kraemer of South Dayton, N.Y., the passenger in the Ford F-150, was ejected from the vehicle and pronounced dead at the scene.

According to State Police, Rolison is the same man charged with striking and killing a 15-year-old girl in a Jamestown hit-and-run incident on New Year’s Eve last year.

An investigation into the crash is still ongoing. There are no charges at this time.

(WJET/WFXP/YourErie.com)– Emergency crews including Fairview Fire and Rescue, West County Paramedics, and Pennsylvania State Police responded to a single-car accident with rollover that occurred Saturday night in Fairview Township. The accident took place near Eaton Road and Tow Road just before 10 p.m. on the CSX rail tracks. When crews arrived, the vehicle was still […]
FAIRVIEW, PA・14 MINUTES AGO
YourErie

Just before 3 a.m. Saturday morning, the Pennsylvania State Police and the McKean Hose Company responded to an accident at the intersection of Reichert and Edinboro Road. According to witnesses at the scene, a Jeep hit a PennDOT Plow Truck. The Jeep sustained moderate damage and was towed from the scene. One person was transported […]
EDINBORO, PA・1 DAY AGO
YourErie

Camper burglaries in Venango County lead to charges against teens

(WJET/WFXP/YourErie.com) — Two teen boys were arrested after an alleged string of burglaries in Venango County. According to a Pennsylvania State Police report, the burglaries were at Marlowe’s campground on Kennerdell Road in Clinton Township beginning at about 6 p.m. on Nov. 22, 2022. Four campers had their doors pried open with a screwdriver. The […]
VENANGO COUNTY, PA・2 DAYS AGO
YourErie

Erie firefighters battled mother nature as they fought a structure fire along East Avenue Friday afternoon. Calls went out for that fire shortly after 3 p.m. Friday afternoon. Initial reports said that the fire started in the building’s roof. That structure is reportedly part of AIM Recycling. No word on whether or not anyone was […]
ERIE, PA・1 DAY AGO
YourErie

(WJET/WFXP/YourErie.com) — Pennsylvania is known to have many car pileups, especially when it comes to the winter months. According to Pennsylvania State Police (PSP), the cause of these pileup crashes is the result of fog and winter weather conditions. PSP offers these tips if you are involved in a pileup: Check travel info before you head […]
ERIE, PA・1 DAY AGO
YourErie

Thursday afternoon, Erie High School entered a “soft lockdown.” This came after staff members were notified that a weapon might be in the building. Students remained in their third-period classes while police swept the building. No weapon was found at Erie High School, but parents and students said that it was quite a confusing situation, […]
ERIE, PA・2 DAYS AGO
YourErie

(WJET/WFXP/YourErie.com) — A former resident of Erie was sentenced to 10 years in prison on Feb. 1 for violating federal narcotics laws. Vincent Andrew Feliciano, 32, conspired to distribute “multi-kilogram quantities” of cocaine, about 1.7 kilograms of blue fentanyl pills (about 15,000 pills), and methamphetamine in the Western District of Pennsylvania from February 2022 through […]
ERIE, PA・2 DAYS AGO
YourErie

PennDOT: I-79 and I-90 speed limits restored, motorists use caution

UPDATE 8:46 p.m. — PennDOT has restored the speed limit on Interstate 90 in Erie County. Motorists are still encouraged to use caution while driving during winter weather. Roadways will not completely free of ice and snow while a winter storm event is happening. PennDOT will continue to treat roadways throughout the storm until precipitation […]
ERIE COUNTY, PA・2 DAYS AGO
YourErie

Community members are heading to The Bayfront Convention Center for the annual Erie Auto Show. Long time car enthusiast Frank Juhasz, who was born in Hungry, said when he moved to Erie in 1957, said he learned how much Erieites love cars and how this appreciation is passed down for generations. “People just likes them, […]
ERIE, PA・16 HOURS AGO
YourErie

A soft lockdown was implemented at Erie High School on Thursday afternoon, allegedly caused by reports of a weapon in the building. Erie High School went into a soft lockdown after staff was notified that a weapon was suspected to be inside the school. However, Erie Police found no weapon after conducting a search of […]
ERIE, PA・2 DAYS AGO
YourErie

The Anna Shelter has announced that they are in need of laundry detergent and are accepting donations of all sizes. Donations can be dropped off at the shelter, any of their clinics, or shipped to them via Amazon, Walmart or Sam’s Club. The Anna Shelter is located at 1555 E 10th St in Erie and […]
ERIE, PA・2 DAYS AGO
YourErie

Middle, high school students get early release in Edinboro due to snow

Members of law enforcement are braved the dunk tank for a cause. At Voodoo Brewing Company on State Street, employees and Pennsylvania State Troopers were getting dunked! They were raising funds for The Pennsylvania Special Olympics. One state trooper said each November, members of law enforcement raise money for the Special Olympics with a polar […]
ERIE, PA・17 HOURS AGO
YourErie

(WJET/WFXP/YourErie.com) — Love is in the air as Valentine’s Day approaches, but that love doesn’t only have to be for humans, it can also be for our furry friends. That’s why the Erie Humane Society wants to help residents find their forever pet at their Shelter Speed Dating event on Saturday, Feb. 18, from 11 […]
ERIE, PA・1 DAY AGO
YourErie

Erie Auto Show returns to the Bayfront this weekend

It’s that time again! The Erie Auto Show is back at the Bayfront Convention Center this weekend with a wide variety of cars to showcase. Since the pandemic, the show has gradually grown in size. The president of Erie Promotions said they have more cars in the building than in years past. “Every dealer that’s […]
ERIE, PA・2 DAYS AGO
YourErie

Below freezing temperatures and strong winds are posing challenges for those exposed to the elements. Local agencies said they are working to protect Erie’s most vulnerable and continue to accommodate those in need during the colder months, especially during a cold snap. The CEO of the Mental Health Association said it’s important for agencies to […]
ERIE, PA・1 DAY AGO
YourErie

February is American Heart Month and is a time to focus on cardiovascular health. Friday morning, a presentation of that proclamation was held at the Erie County Department of Health. On the behalf of Erie County Executive Brenton Davis, the Erie Heart Association is receiving an official proclamation for “Wear Red Day” for women. The […]
ERIE COUNTY, PA・1 DAY AGO
YourErie

It was day two for the Erie Auto Show and Friday’s theme was “Hometown Hero Day.” On Friday only, all first responders, military and healthcare workers that attended got in with free admission courtesy of Plyer Entry Systems. The first display car lovers saw when they walked in was the antique and muscle car display. […]
ERIE, PA・1 DAY AGO