Details of the two Russian military airbases hit by explosions 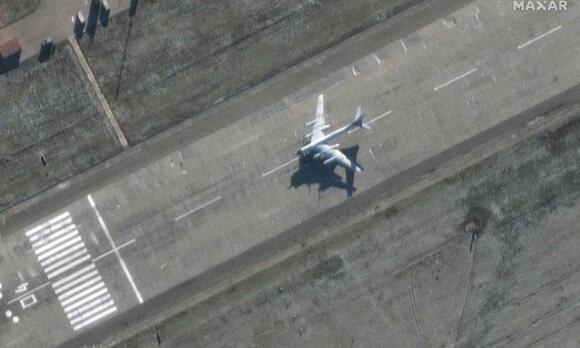 The explosions at the Engels-2 and Dyagilevo airbases, if confirmed as Ukraine’s, would mark its deepest attack so far into Russia and against key military facilities used in the Kremlin’s war.

“Based on the location of the airbase, its jets have played a major role in the recent bombings in Ukraine,” said Rob Lee, a senior fellow at the US-based Foreign Policy Research Institute, of the Saratov region facility – 450 miles east of Ukraine.

Lee said any Ukrainian attack on the Engels-2 base was likely to be aimed at disrupting Russian plans to strike Ukrainian infrastructure. “Ukraine has been warning for weeks now that Russia was preparing for a fresh wave of missile attacks on its energy grid. This could have been a pre-emptive strike,” he said.

Lee estimated that Russia kept about 15 to 16 Tu-95MS bombers at the Engels-2 airbase and 15 Tu-160s, which represents the largest share of the country’s Tu-160 arsenal.

Gleb Irisov, a former Russian air force lieutenant who left the military in 2020, described Engels-2 as a “key airfield for the country’s strategic aviation”.

“If indeed Ukraine managed to hit the base, it shows the country is making a lot of progress in their ability to reach bases far away from the battlefield.”

The airbase in Dyagilevo, less than 150 miles from Moscow, also houses the 121st heavy bomber aviation regiment whose jets are believed to have attacked Ukraine.

It also serves as the base for Russia’s only Il-78 tanker regiment, a strategically vital division responsible for the air-to-air refuelling of the country’s military aviation.

“Destruction of strategic bombers will undoubtedly get more attention, but, if Russia loses Il-78 tanker aircraft, that might be the biggest issue for Moscow,” Lee said. “The production of new tanker aircraft is notoriously slow so this could turn out to be the most damaging part for Russia.”

Lee said that one of the main issues for the Russian air force was that many of its aircraft were not housed in hangars, leaving them exposed to attacks.

“It is clear that Russia didn’t prepare plans to defend airbases deep inside the country,” Lee said.

“Despite the fact that this isn’t the first attack on Russian soil, Moscow has been very slow to react and protect its jets.”

While it was not immediately clear what caused the explosion at either military base, Baza, a Russian media outlet with sources in the security services, reported that the Russian airfield at Engels-2 was attacked by a drone.

Lee believes the drones would have been launched by Ukraine from within Russian territory. “The unmanned aerial vehicle attacks have a relatively short range and they wouldn’t have been able to fly all that way from Ukraine,” Lee said.

The explosion at the Engels-2 airfield led to anger among some prominent Russian pro-war bloggers who blamed the country’s military for the inability to protect its airbases.

“The sheep in the rear continue to demonstrate their absolute unsuitability … Even now, the airfields with strategic aviation are not covered by air defence systems,” Voenniy Osvedomitel, a popular commentator, wrote on his Telegram channel.

reaching deeper & deeper into 'mother' Russia. It's only a matter of time before they bring the conflict home to the Kremlin. I can't wait till the Ukraine reaches out and 'touches' Putin's $B mansion, which, of course, he knows nothing about, hahaha.

The enemy on the other side of the woods can be heard when the wind blows towards the deep Ukrainian trenches. Russian voices carry in the freezing cold air as do the growls of the tanks and the buzz of the kamikaze and reconnaissance drones. But that is not all...
1 DAY AGO
The Guardian

Has Donald Trump taken up meditation as his new year resolution? Is he mainlining sedatives? Did a demon snatch his soul and replace it with that of a reasonable person? I ask because the unthinkable has happened: Trump has responded to the idea of one of his former acolytes challenging his 2024 ambitions in a calm and measured manner, instead of with his usual insults.
FLORIDA STATE・2 DAYS AGO
The Guardian

A senior Russian lieutenant who fled after serving in Ukraine has described how his country’s troops tortured prisoners of war and threatened some with rape. Konstantin Yefremov left Russia in December after spending three months in the parts of the southern Zaporizhzhia oblast that were occupied in Vladimir Putin’s invasion of Ukraine.
16 HOURS AGO
Business Insider

Igor Krasnov told Putin there were "more than 9,000 citizens who were illegally mobilized" when Russia sent conscripts into Ukraine late last year.
1 DAY AGO
Newsweek

The video sparked discussions on social media about what kind of weapon could be responsible for the attack.
2 DAYS AGO
Newsweek

The U.S. government has warned that the war in Ukraine has "raised geopolitical tensions in the Arctic"
MICHIGAN STATE・1 DAY AGO
The Guardian

I think a lot of people think my generation don’t care about politics or aren’t interested. They underestimate how perceptive we are. We’re part of the world too. We sit in classrooms. We know that schools don’t have proper funding and that our teachers aren’t properly paid for the hard work they do.
2 DAYS AGO
The Guardian

On the outskirts of Tournai, a sleepy medieval town in the gentle, Brueghelian landscape of the French-speaking part of Belgium, there is an unassuming grey hangar, barely hidden behind a fence. Inside are rows upon rows of German-made Leopard 1 tanks and other heavy fighting vehicles – some of the same types of weapons that top Ukraine’s military wishlist.
2 DAYS AGO
The Guardian

When I was a child, and friends asked me what I would do if I ever met my dad, I always replied that if I had a gun I would shoot him. I was a young teen in a small east Yorkshire market town with, at best, minor connections to a burgeoning petty criminal underworld. Even if I had been able to get a gun, I would have been more likely to shoot off a finger in error than aim correctly at my absent father. It was an empty threat that clearly revealed a deep, simmering anger.
2 DAYS AGO
The Guardian

Do you hate the idea of animal-free meat? Many people do. Unsurprisingly, livestock farmers are often furiously opposed. More surprisingly, so are some vegans: “Why can’t people eat tofu and lentils, like me?” Well, the new products – plant-based, microbial and cell-cultured meat and dairy – are not aimed at vegans, but at the far greater number who like the taste and texture of animals. Many others instinctively recoil from the idea of food that seems familiar, but isn’t.
2 DAYS AGO
The Guardian

A Labour MP has said she has been “bombarded” with rape and death threats after speaking out against the “toxic” influence Andrew Tate had over schoolboys. Alex Davies-Jones received abuse over email and directly to her office, soon after she raised the issue at prime minister’s question’s earlier this month. At the time, the shadow technology minister told MPs: “Teachers are now having to develop their own resources to re-educate boys who are being brainwashed online by his deeply toxic messaging.”
2 DAYS AGO
The Guardian

How Putin’s plans to blackmail Europe over gas supply failed

Within eight months of Russia invading Ukraine, the EU’s 27 states had replaced about 80% of the natural gas they used to get from Moscow
5 HOURS AGO