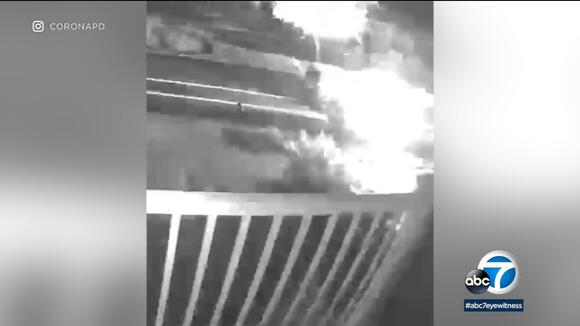 Corona police and firefighters hope the public can help them identify a pair of arsonists seen on dramatic surveillance video. In the footage, recorded on Nov. 7, a car parked alongside a sidewalk is seen erupting in massive flames. The Corona Police Department said that the suspects, believed to be two women, also allegedly tried to torch another car that was parked in a family's driveway, but the vehicle's alarm went off. The suspects are described as being in their 30s. One of the women is described as having a thin build and may have been burned in the incident, investigators said. The other has a medium build and long hair. The pair fled the scene in a blue Kia Soul, which may have sustained damage from the flames.

The owner of a beloved bookstore in North Hollywood received an outpouring of support from customers and neighbors in the last few days.

The suspects fled westbound on West Ontario Avenue and were last seen on West Sixth Street, heading toward the 91 Freeway, police said. Anyone with any information about the incident or the suspects is urged to contact Corona Fire Investigator Xente Baker at (951) 736-2257 or via email at xente.baker@coronaca.gov.

Family members of a double-amputee shot and killed by Huntington Park police officers last week after he threatened them with a knife are calling the shooting a murder.
HUNTINGTON PARK, CA・23 HOURS AGO
ABC7

A standoff at the Commerce Casino involving a man with a knife ended after about two hours with the man being transported to a hospital.
LOS ANGELES COUNTY, CA・7 HOURS AGO
ABC7

A suspect was arrested Monday evening for allegedly trying to squat inside a guest home in Beverly Hills, police say.
BEVERLY HILLS, CA・18 HOURS AGO
ABC7

At least three businesses in Long Beach were targeted in a string of break-ins, one of which was caught on camera. Now, owners are on high alert.
LONG BEACH, CA・21 HOURS AGO
ABC7

Three suspects were arrested after another brazen smash-and-grab robbery caught on video inside a Lupita's Jewelers in the Inland Empire.
FONTANA, CA・2 DAYS AGO
ABC7

Assault with deadly weapon suspect in custody after chase through LA

A suspect wanted for assault with a deadly weapon was taken into custody after leading authorities on a chase through surface streets and freeways near downtown Los Angeles.
LOS ANGELES, CA・2 DAYS AGO
ABC7

The city of Monterey Park is thanking the firefighter-paramedics who helped save lives after the mass shooting - and apologizing for not recognizing the trauma they experienced.
MONTEREY PARK, CA・4 HOURS AGO
ABC7

Police responded to five different gunman scares at Walmart locations in Los Angeles and Orange counties over the last three days, but they all turned out to be hoaxes.
ORANGE COUNTY, CA・1 DAY AGO
ABC7

One person was arrested for suspicion of felony vandalism and was in possession of spray paint and a glass breaking tool after a protest in Hollywood.
LOS ANGELES, CA・1 DAY AGO
ABC7

A Fountain Valley family continues their search for a missing parrot with a big social media following. A reward is now being offered to help bring the beloved parrot back home.
FOUNTAIN VALLEY, CA・3 HOURS AGO
ABC7

Security surveillance camera images of Andrew Alan Hernandez inside the Capitol Building on the day of the insurrection showed him carrying an American flag with a Go-Pro camera zip-tied to the pole.
JURUPA VALLEY, CA・18 HOURS AGO
ABC7

A couple in Arcadia is selling doughnuts to raise money for the victims of the Monterey Park mass shooting. It's an effort to honor the victims, including one who was very close to the couple.
MONTEREY PARK, CA・4 DAYS AGO
ABC7

One of the bills would increase the penalties for serial thieves and another would reinstate a mandatory 20-year minimum sentence for anyone convicted of using a firearm during a violent crime.
CALIFORNIA STATE・19 HOURS AGO
ABC7

The Benedict Canyon homeowners association said this was the third time homicides have occurred at short-term rentals in their neighborhood in the past two-and-a-half years.
LOS ANGELES, CA・1 DAY AGO