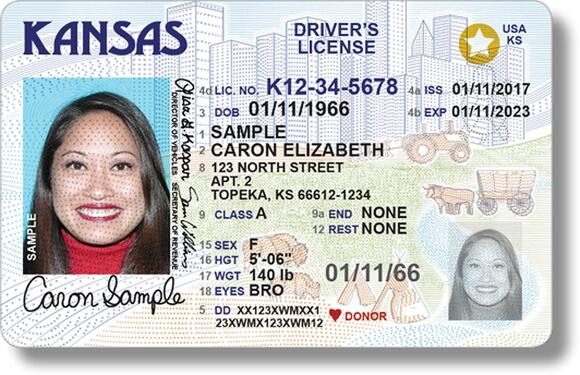 ( The Hill ) — The Department of Homeland Security (DHS) announced it was extending the deadline by roughly two years for air passengers to use a REAL ID when traveling.

The agency announced on Monday it will begin enforcing the more stringent identification requirement on May 7, 2025, after previously setting a deadline of May 3, 2023. The announcement marks DHS’s third extension.

REAL ID-compliant documents, which are generally signified by a small star, are already required for people to enter certain restricted federal facilities.

“DHS continues to work closely with U.S. states, the District of Columbia, and the U.S. territories to meet REAL ID requirements,” Secretary of Homeland Security Alejandro Mayorkas said in a statement.

“This extension will give states needed time to ensure their residents can obtain a REAL ID-compliant license or identification card,” he added. “DHS will also use this time to implement innovations to make the process more efficient and accessible. We will continue to ensure that the American public can travel safely.”

The U.S. began moving toward the requirement after lawmakers passed a law in 2005 establishing minimum security standards for driver’s licenses and identification documents.

The law came in response to a recommendation by the 9/11 Commission and seeks to implement additional anti-counterfeiting and anti-fraud measures.

Once the deadline passes, travelers 18 years and older will need a REAL ID-compliant identification document to pass through the nation’s airports.

The requirement was set to go into effect in 2020, but the agency began granting extensions as the pandemic shut down Departments of Motor Vehicles and other identification-issuing agencies.

Monday’s announcement marks the third extension of the requirement’s expansion to air travel.

DHS first granted an extension until October 2021 before issuing a second extension to May 2023, making the latest announcement the longest extension yet of roughly two years.

A dentist from Massachusetts pleaded guilty to embezzling more than $1.2 million from his employer as well as fraudulently receiving benefits from the government using his employer's name.
BOSTON, MA・19 HOURS AGO
WWLP

The Superintendent of Longmeadow Public Schools sent an email to parents regarding "inappropriate online behavior" from a former employee.
LONGMEADOW, MA・14 HOURS AGO
WWLP

3 arrested after trafficking cocaine, possession of firearms in Greenfield

Three occupants driving on Route 91 in Greenfield were placed under arrest after Massachusetts State troopers found cocaine and illegal possession of firearms inside the vehicle at a traffic stop.
GREENFIELD, MA・2 DAYS AGO
Salon

Arizona television personality Kari Lake's first foray into politics failed in a spectacular manner, in large part because she alienated a substantial segment of voters in her own party who either flipped to her opponent or chose to skip voting for anyone for governor. That's according to a post-election analysis...
MARICOPA COUNTY, AZ・2 DAYS AGO
Benzinga

Sen. Ted Cruz (R-Texas) shared his views on why it was difficult for members of the Republican Party to have an opposing view with former U.S. President Donald Trump in an interview at the 2022 Texas Tribune Festival, held in September. What Happened: Trump is a "unique" character, according to...
TEXAS STATE・1 DAY AGO
The Independent

Donald Trump issued a potentially revealing statement on Truth Social as news broke Tuesday that authorities in Fulton County, Georgia, are nearing a decision on charges for multiple members of his inner circle — including potentially Mr Trump himself.The ex-president, out of nowhere, brought up his now-infamous 2 January 2021 call to Georgia Secretary of State Brad Raffensperger in which he instructed the state elections chief to “find” more than 11,000 votes he would have needed to surpass Joe Biden’s total in the state.“My phone call to the Secretary of State of Georgia, and a second call which the...
FULTON COUNTY, GA・2 DAYS AGO
Insider

Here are the top 19 countries that aren't safe for US citizens to travel to, according to the US State Department

Countries deemed too dangerous for travel by the State Department are known for civil unrest, terrorist activity, and kidnappings.
2 DAYS AGO
The Hill

For nearly three years, households have been receiving an additional $95 or more on top of their normal allotment. But that extra money is set to expire next month.
GEORGIA STATE・20 HOURS AGO
CNN

Fewer than one-third of Americans believe that House GOP leaders are prioritizing the country's most important issues, according to a new CNN Poll conducted by SSRS. Neither party's congressional leadership earns majority approval, and Republicans are particularly likely to express discontent with their own party leadership.
17 HOURS AGO
Business Insider

Republicans have indicated that they're willing to hold off on raising the debt ceiling in order to secure cuts to Medicare and Social Security.
MASSACHUSETTS STATE・2 DAYS AGO
WWLP

Another winter storm to hit western Massachusetts this week

As western Massachusetts residents are cleaning up from Monday's snow storm, another one is on its way.
MASSACHUSETTS STATE・2 DAYS AGO
Business Insider

The inquiry Trump launched to clear his name on Russia collusion ended up investigating him for potential financial crimes: NYT

It is not clear what happened to the probe, which started as a result of a tip by Italian officials.
14 HOURS AGO
WWLP

It’s hoped that the lights at a Massachusetts high school will be able to be turned off by the end of next month, about a year-and-a-half after a computer glitch kept the lights on night and day, officials say.
WILBRAHAM, MA・2 DAYS AGO
WWLP

As dark as prospects may seem for first-time house shoppers, a recent analysis found that there are still markets where dreams of settling down without crushing, monthly payments is a reality.
1 DAY AGO
WWLP

A Greenfield man was arrested in West Springfield Thursday morning after police found stolen items, including a kitchen sink, inside his vehicle.
WEST SPRINGFIELD, MA・19 HOURS AGO
The Associated Press

WASHINGTON (AP) — Democrats are picking an early fight with the House Republican majority over committee seats, nominating two California lawmakers for the Intelligence Committee in open defiance of House Speaker Kevin McCarthy’s vow to block them. Minority Leader Hakeem Jeffries, in a letter sent to McCarthy over...
GEORGIA STATE・3 DAYS AGO
WWLP

The woman admitted to making the ricin in her Quebec home and mailing it to then-President Trump and eight Texas law enforcement officials in 2020.
TEXAS STATE・1 DAY AGO
WWLP

Yankee Candle's parent company is making transition plans, which will result in the closure of the division's corporate headquarters in South Deerfield.
DEERFIELD, MA・3 DAYS AGO