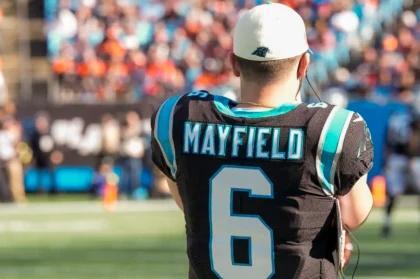 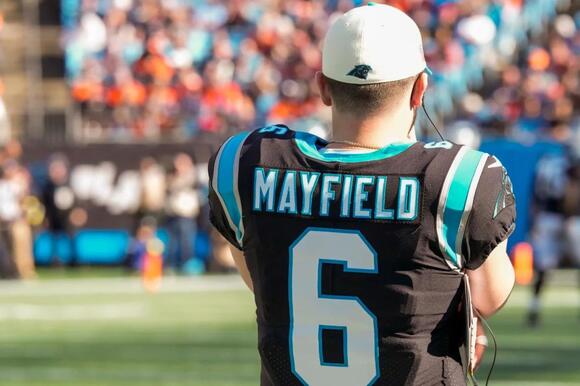 The Carolina Panthers are reportedly set to release quarterback Baker Mayfield , moving on from the former No. 1 overall pick just months after trading for him.

Carolina acquired Mayfield from the Cleveland Browns in July, dealing a conditional 2024 fifth-round pick for the 2017 Heisman Trophy winner. He beat Sam Darnold for the starting job in training camp but lost his spot to P.J. Walker later in the season.

When Walker went down with an injury, Mayfield temporarily resumed his duties as the Panthers’ starting quarterback. However, the 27-year-old returned to the bench after Sam Darnold returned from injured reserve. Following a quality performance in a Week 12 win over the Denver Broncos, interim coach Steve Wilks announced Darnold would start following the team’s Week 13 bye.

According to Ian Rapoport of NFL Network , the Panthers are expected to release Mayfield and the former No. 1 overall pick will hit waivers on Monday afternoon. The Panthers officially announced Mayfield’s release at 11:36 AM ET.

After losing his starting job multiple times with two NFL teams, Mayfield is now being granted his release. Under NFL rules, he is required to pass through waivers before he becomes a free agent. The NFL waiver order for Week 14 is based on the inverse order of the NFL standings , with the Houston Texans holding the top waiver priority.

With a majority of his salary already covered by the Browns and Panthers, his expiring contract shouldn’t prevent any teams from placing a claim on him if they want him.

Houston went into the season hoping second-year quarterback Davis Mills could build upon the flashes shown in his rookie season. Instead, the 67th overall pick in the 2021 NFL Draft lost his starting job in Week 12 to Kyle Allen. Unsurprisingly, Allen didn’t fare any better.

Houston is guaranteed Mayfield if it wants him. The Austin, Texas native is a texas Tech alum and was previously a star at Lake Travis High School. Headed into the 2023 free agency class, he wants an opportunity to play and the Texans could provide it.

In an offense with running back Dameon Pierce and wide receiver Brandin Cooks, Mayfield would at least have a chance to be a functional quarterback for a few weeks. It might be the perfect way for both sides to end a disastrous 2022 season.

Matthew Stafford is out for the season and Sean McVay’s back-and-forth between John Wolford and Bryce Perkins is all the evidence needed to know he isn’t happy with the new quarterback situation. Holding the No. 3 spot in the NFL waiver order, Los Angeles has a shot at Mayfield.

Also Read:
Who is the highest-paid NFL coach? (Today and All-Time)

There are a few reasons why this could happen. First, the rivalry between the Rams and San Francisco 49ers carries over into their transactions and the players they pursue. With Jimmy Garoppolo done for the year, Kyle Shanahan might want someone a little more proven than Josh Johnson and Brock Purdy. The perfect chess move for the Rams would be to block it.

Furthermore, Mayfield might give Los Angeles slightly better odds to win another game or two this season. Considering the Rams don’t hold their own first-round pick, tanking games doesn’t benefit them much. This could also be a chance to see how Mayfield would look in a QB-friendly scheme.

The San Francisco 49ers have everything they need to win a Super Bowl except a quarterback. All due respect to Mr. Irrelevant and a quarterback who has played for more than a dozen teams, but the 49ers likely don’t advance past the NFC Divisional Round with either under center.

San Francisco is the perfect situation for a quarterback. Shanahan put Deebo Samuel, George Kittle, Christian McCaffrey and Brandon Aiyuk together to make everything easy for his signal-caller. All Mayfield would need to do is get the football out quickly and San Francisco’s YAC threats will do the rest. At the very least, Mayfield offers a higher ceiling than Purdy or Johnson.

However, the NFL waiver order stands in the way. If the 49ers want Baker Mayfield, they’ll need 26 teams to pass on him. It’s a list that includes quarterback-needy clubs like the New Orleans Saints, Indianapolis Colts and New York Jets. The odds are stacked against the 49ers. If Mayfield makes it through waivers, though, he then becomes a strong candidate to land in San Francisco.

IF Mayfield is lucky enough to get with the right team and the right coaches, he will succeed. People need to understand the best QB can't carry a team and won't be successful with the wrong coach.

Baker Mayfield has reach his limit as a Quarterback, he is what he is, and just because his fans want to make him something that he's not a elite Quarterback that doesn't mean he has the capability to be one.

EXCLUSIVE: Colin Kaepernick has signed with CAA for representation. The former NFL star holds the all-time NFL record for most rushing yards in a game by a quarterback. In 2016, he took a knee during “The Star Spangled Banner” to bring attention to systemic oppressions against Black and Brown people, and since then, has founded and helped to fund three organizations: Know Your Rights Camp, Ra Vision Media, and Kaepernick Publishing, which advance the liberation of Black and Brown people through storytelling, systems change, and political education. Related Story Anna Faris Signs With CAA Related Story Marilyn Manson Settles 'Game Of Thrones' Actress Esmé Bianco's...
1 DAY AGO
Sportsnaut

Sean Payton will not be the next head coach of the Denver Broncos. It had been trending in this direction
DENVER, CO・1 DAY AGO
Sportsnaut

The Carolina Panthers became the first NFL team this cycle to hire a head coach, naming Frank Reich as the
CHARLOTTE, NC・1 DAY AGO
Sportsnaut

Cincinnati Bengals quarterback Joe Burrow has won all three of his matchups with the Kansas City Chiefs over the past
CINCINNATI, OH・2 DAYS AGO
Sportsnaut

Jalen Hurts and Brock Purdy are familiar foes, having met in one of the most exciting games of the 2019
NORMAN, OK・1 DAY AGO
Sportsnaut

After recent speculation suggested he might be the front-runner for the job, on Thursday the Carolina Panthers reportedly decided to
CHARLOTTE, NC・1 DAY AGO
Sportsnaut

One of the best coaching candidates in this hiring cycle is quickly emerging as a good bet to fill one
HOUSTON, TX・3 HOURS AGO
Sportsnaut

There’s no question that Joe Burrow is already one of the best quarterbacks in the NFL today. Despite still being
KANSAS CITY, MO・8 HOURS AGO
Sportsnaut

Hours before the first snap of the preseason in August, the odds on futures bets for Jalen Hurts as Super
PHILADELPHIA, PA・4 HOURS AGO
Sportsnaut

In an attempt to maintain the magic they had in 2022-2023, the New York Giants reportedly could pay one of
NEW YORK CITY, NY・5 HOURS AGO
Sportsnaut

Following another earlier-than-hoped exit from the NFL playoffs, the Dallas Cowboys are left wondering what they need to do to
DALLAS, TX・2 DAYS AGO
Sportsnaut

5 greatest comebacks in NFL history, including the ‘Monday Night Miracle’

Many football fans wonder about what are the greatest comebacks in NFL history, especially after two of the all-time best
1 DAY AGO
Sportsnaut

Buffalo Bills linebacker Matt Milano has been named to the AFC roster for the upcoming Pro Bowl Games, the team
6 HOURS AGO