Yellowstone flood victim says outlook is bleak to save his property 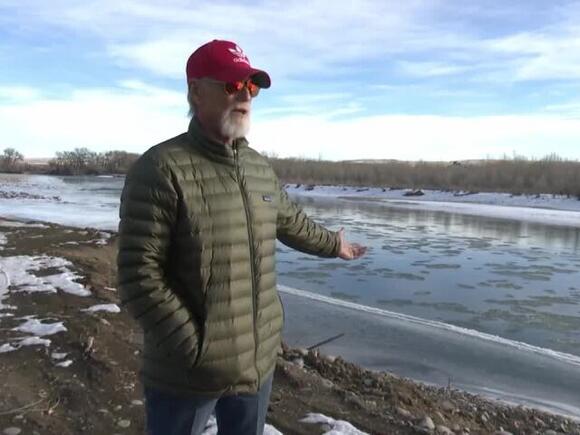 PARK CITY - Several months ago, Q2 introduced you to Mike Kinsey after his house was washed away in the 500-year floods in June.

A video he shot of his house breaking apart and being pulled into the water went viral worldwide.

“I have no idea what’s going to happen. I’m really losing hope,” he said.

Several months later, he now fears he will lose his property, crushed under a wave of debt.

“Everyone that knows me thought I was the luckiest person in the world to live here on the river like I did, myself included,” he said.

He’s a disabled veteran and is currently retired.

“I really don’t want to lose this place. I’ve lived here since 1977. I built that house out of telephone pole rejects,” Kinsey said.

He says he owes $250,000 on the house, having refinanced it in 2016 to build up the bank to protect the house from the Yellowstone River.

“I should have had a quarter of a million in flood insurance, which I don’t,” Kinsey said.

His homeowner's policy has, to date, denied all of his claims.

“My mortgage company finally put me in forbearance which means my payments are stacking up,” he said.

He said there’s one company that hasn’t come to collect.

“And put another 100 ton of rock in here which I have not paid for, so I don’t even know what I owe Donnes construction for trying to save my house,” he said.

Like many people who were flooded, Kinsey didn’t have flood insurance.

“In 1995, for some unbeknownst reason, they changed the floodplain and moved my house out of the emergency flood plain so, when my house was refinanced the outfit that I financed with didn’t have to have flood insurance on here so I didn’t have it and I didn’t know that until the morning that my house went in the flood and called my agent and … anyway…no flood insurance,” he said.

A letter he received after he lost the house stated the house was in the flood plain and needed to be insured.

“They want me to put insurance on this house that I no longer own and they want me to raise it two feet above the flood plain,” Kinsey said.

With $37,000 from FEMA, Kinsey says they’re trying to make it through the winter and as long as they can.

He said he would try to rebuild on the property if his financial situation got sorted out.

But he knows he may lose even more. A single photo from his military days is the only one left.

“I can’t even make an educated guess on what the hell I’m gonna do, to be honest with ya, because I just don’t know,” he said.

“There’s the thought that we want to do the marathon loop, you know connect the Rims to the river and get all that going so there’s plans in the works for all of that,”
BILLINGS, MT・8 HOURS AGO
Q2 News

A winter storm will bring several inches of snow to the lower elevations and over a foot in the mountains
BILLINGS, MT・1 DAY AGO
Q2 News

"I’m out of business, I don’t have any place to finish my furniture, display it, to have people come pick it up, nothing. I’m done until they get me a building to work out of."
BELFRY, MT・3 DAYS AGO
Q2 News

The crash on North 27th Street happened shortly before 10 a.m. when a car crashed into the Billings Gazette building.
BILLINGS, MT・1 DAY AGO
Q2 News

It's been a tough year for the residents of Red Lodge — beginning with the June flooding — and now a lack of snowfall this winter has businesses struggling throughout the community.
RED LODGE, MT・5 DAYS AGO
Q2 News

Today will be the warmest of the week with strong winds ahead of a Winter Storm that could bring several inches of snow Friday into Saturday.
BILLINGS, MT・2 DAYS AGO
Q2 News

The Continuum of Care has a Point-In-Time survey to determine how many people are experiencing homelessness.
BILLINGS, MT・2 DAYS AGO
Q2 News

Daily snow showers will be possible through the weekend with a big cool down on the way as Winter makes a return.
BILLINGS, MT・4 DAYS AGO
Q2 News

In the past week, residents in the Billings heights haven't received mail, and they aren't the only ones facing a delay in delivery in Montana and around the country.
BILLINGS, MT・9 DAYS AGO
Q2 News

Q2 Billings Area Weather: You have this week to find that winter gear again

This week will be mild but unsettled with scattered showers. But we shift gears to colder and snowier weather for the weekend and beyond.
BILLINGS, MT・6 DAYS AGO
Q2 News

Billings based Castlerock Excavating had their skid-steer stolen out of the Annafeld subdivision early Tuesday morning in a surprising crime that will put a hitch in the company's daily operations.
BILLINGS, MT・10 DAYS AGO