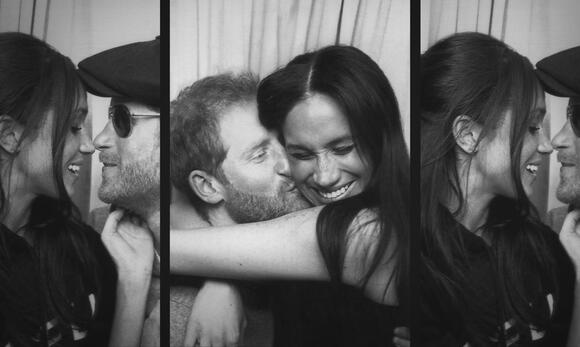 T he first trailer for the Netflix documentary on Prince Harry and Meghan Markle , Duchess of Sussex, places a black-and-white photograph of paparazzi out of context to portray the paparazzi as aggressive when it comes to the royal couple.

The image, which was really taken at the final Harry Potter premiere in 2011, appears in the trailer while Harry talks about the need to protect his family, implying that he was protecting them from the press. However, the premiere took place years before the couple even met.

“In the Netflix trailer, it’s implied the photographers, including me, were trying to get a shot of the royal couple — but that’s nonsense,” photographer Doug Seeburg told the Sun on Sunday. “For a picture from that premiere to turn up in this trailer about Harry and Meghan seems like lazy picture research.”

No member of the British royal family was at the 2011 premiere, Seeburg added, which took place seven years before the couple's royal wedding.

The editing job by Netflix undermined Harry's comments on protecting his family, a royal expert told the publication. The image is the first result when searching for “paparazzi” images on the stock image website Alamy.

A second trailer for the six-part documentary series was released Monday and attempts to draw parallels between Meghan and Princess Diana . Footage of paparazzi photographing both Meghan and Diana, along with flashy headlines, was featured in the trailer.

"The pain and suffering of women marrying into this institution — this feeding frenzy," Harry said.

The first three episodes of the documentary series premiere on Thursday and are expected to include a deeper dive into the controversies surrounding the royal couple and shed light on the reasons the couple left the royal scene for life in the United States. A second part, which will include the last three episodes, will be released one week later on Dec. 15.

The first round of Social Security retirement payments slated to be distributed in February is set to go out to recipients in just five days.
VIRGINIA STATE・3 DAYS AGO
WashingtonExaminer

EXCLUSIVE — A new book by Christopher C. Miller, the acting secretary of defense in the final months of Donald Trump’s presidency, recounts his appointment to the post amid questions about his predecessor’s loyalty.
MONTANA STATE・1 DAY AGO
WashingtonExaminer

The Memphis Police Department in Tennessee has fired another officer in the aftermath of the police beating and death of Tyre Nichols last month.
MEMPHIS, TN・3 DAYS AGO
Showbiz Cheat Sheet

Prince Harry reportedly has a few fresh demands for the royal family to cater to if they want him and Meghan Markle to attend King Charles III's coronation.
3 DAYS AGO
RadarOnline

Kevin Costner’s Yellowstone will be coming to an end and the actor’s future with the show is up in the air, RadarOnline.com has learned. Earlier today, Deadline broke the story, Paramount + and Yellowstone creator Taylor Sheridan have come up with a plan to end Yellowstone. The parties have decided to launch a Matthew McConaughey-lead spin-off which will continue with the majority of the cast. Sources revealed that Costner has been refusing to commit to a lengthy shooting schedule. Deadline said that Costner originally had agreed to 65 days of shooting for the show. However, for the first part of...
5 HOURS AGO
Insider

"Just give us a second, we're not gonna rush you. It's all gonna be fine," Swift told the photographers with a smile.
1 DAY AGO
OK! Magazine

Awkward! Beyoncé won her 31st Grammy award for Best R&B song — but the singer couldn't make it on stage as she was stuck in traffic, according to host Trevor Noah. Luckily, Nile Rodgers and The-Dream came to the rescue and accepted the trophy. "Y'all know n****s be on CP time," the latter said. "Beyoncé thanks y'all.""When I got called to play on this song, it was the most organic thing that every happened to me. I heard the song and I said, 'I want to play on that right now.' It was one take. I promise. I played it....
1 DAY AGO
musictimes.com

Madonna graced the 2023 Grammy Awards stage on Sunday to present another singer's performance. However, she quickly shared a speech to the crowd and those watching from home. The "Material Girl" singer told everybody, "I'm here to give thanks to all the rebels out there, forging a new path and taking the heat for all of it."
13 HOURS AGO
SheKnows

The week of February 6 will change the show forever. Previews don’t get a whole lot tenser than the one that General Hospital has dropped for this week’s episodes. Every time you think your blood pressure can’t get any higher, whoops, there it goes — getting higher still!
16 HOURS AGO
WashingtonExaminer

It’s been just over a month since Republicans took control of the House and have begun to usher in a new era of rules and legislative priorities.
2 DAYS AGO
INSIDE News

Celebrities who died in January 2023

This beginning of the year has had some important casualties in the world of acting, entertainment, and sports. One of the most mentioned unexpected deaths was that of Lisa Loring, the actress who played the original Wednesday Addams that the famous television series "The Addams Family" from 1964.
14 HOURS AGO
WashingtonExaminer

A high-ranking government official who has been asked by Hunter Biden to launch an investigation in connection to his abandoned laptop has long-standing ties to President Joe Biden and his family, records show.
DELAWARE STATE・3 DAYS AGO
WashingtonExaminer

Sen. Roger Wicker (R-MS), the ranking member of the Senate Armed Services Committee, slammed the Biden administration for its handling of the Chinese spy balloon on Saturday, which was successfully shot down Saturday afternoon.
MONTANA STATE・2 DAYS AGO
WashingtonExaminer

Stimulus update: 11 days to claim checks worth up to $800 in South Carolina

South Carolina residents have 11 days left to file their 2021 taxes and receive a rebate of up to $800.
SOUTH CAROLINA STATE・2 DAYS AGO
WashingtonExaminer

California taxpayers may get some extra cash within the next couple of weeks thanks to the final wave of the state's Middle Class Tax Refund.
CALIFORNIA STATE・2 DAYS AGO
WashingtonExaminer

Melinda Dillon, a two-time Oscar nominee best known for the movies A Christmas Story and Close Encounters of the Third Kind, has died at 83.
LONG BEACH, CA・1 DAY AGO
WashingtonExaminer

Backstreet Boys band member Nick Carter is fighting back against allegations that he sexually assaulted several women over 20 years ago.
NEVADA STATE・1 DAY AGO
WashingtonExaminer

Republicans blasted the Democratic National Committee on Saturday for breaking a decadeslong tradition by removing the Iowa caucus from the beginning of the primary season.
IOWA STATE・2 DAYS AGO
WashingtonExaminer

Secretary of State Antony Blinken explained why he canceled his trip to China, saying, "Conditions were not conducive for a constructive visit at this time."
WASHINGTON STATE・3 DAYS AGO
WashingtonExaminer

Rep. Jim Himes (D-CT), the top Democrat on the House Intelligence Committee, blasted his Republican colleagues on Friday for demanding that a Chinese surveillance balloon hovering over the United States be shot down.
MONTANA STATE・3 DAYS AGO