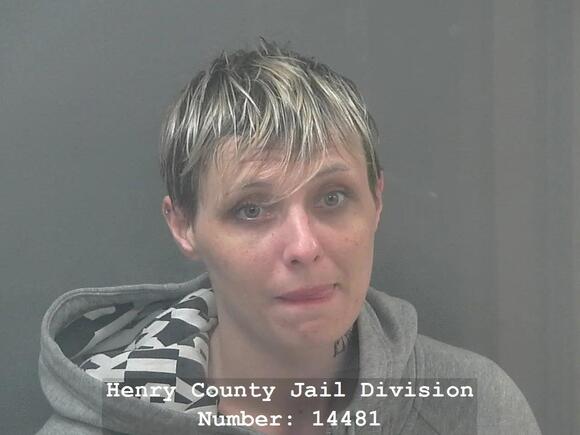 NEW CASTLE, Ind. — A woman who hit a vehicle, seriously injuring another woman, had used methamphetamine within the previous 24 hours, court documents state.

The crash happened shortly before 6 p.m. on November 25. Court documents state when police arrived at the scene, they found six people around a wrecked 2022 Ford Explorer, and a woman was underneath the vehicle.

The woman suffered a thigh injury in the crash. Court documents state that one of the sandals she was wearing ended up 38 feet away from her.

The driver, Kasha Priddy, had her 1-year-old child in the back seat. The probable cause affidavit filed in the case against Priddy said she told an officer that she used methamphetamine less than 24 hours before the crash and took a prescription for narcotic dependence earlier that morning.

Two witnesses told police that the victim was helping them unload a vehicle before Priddy hit her. One of the witnesses was right behind the vehicle when he noticed Priddy’s headlights traveling “way too close” to the side of the road.

That is when, the documents state, he saw Priddy’s vehicle hit his girlfriend’s mother and the vehicle. He said he was about 1 foot away from being hit as well. The vehicle ended up further down the road before hitting another parked vehicle. There was also a vehicle that was side-swiped.

At the hospital, the document states Priddy told medical staff that she has an infection in her legs that causes swelling and pain. She said she was on her way to the pharmacy to get medication when the crash happened.

The document states Priddy told medical staff that she believes the infection causes her to black out occasionally. When police asked why she drives if that happens, Priddy responded that it hasn’t happened in a while.

The child was checked out at the hospital and was released to her grandmother. Priddy now faces charges of operating a vehicle while intoxicated resulting in serious bodily injury, child neglect, reckless driving, and operating a vehicle with a specified amount of controlled substances.

An initial hearing in the case is set for December 15.

COLUMBUS, Ind. — Six people are under arrest after police busted a meth lab in Columbus. According to the Columbus Police Department and the Bartholomew County Sheriff’s Department, deputies and SWAT officers executed searches on Monday night on Jewel Street and on 6th Street as part of two long-term narcotic investigations. Police reported locating large […]
COLUMBUS, IN・9 HOURS AGO
FOX59

HOWARD CO., Ind. — The Howard County Sheriff’s Office is looking for a person of interest in a homicide investigation involving the death of his 41-year-old wife. Sheriff’s deputies were alerted to the disappearance of Sandra L. Wilson, 41, on Tuesday morning. Around 11 a.m., deputies and detectives went into Wilson’s home at 1105 Arundel […]
HOWARD COUNTY, IN・6 HOURS AGO
FOX59

Wells County officers are looking for the suspect who drove a car at 117 mph, crashed it and fled the scene.
WELLS COUNTY, IN・2 DAYS AGO
FOX59

RIPLEY COUNTY, Ind. – A Johnson County woman has been arrested for possession of drugs and other charges following a road rage incident. Indiana State Police were notified around 11 am. on Feb. 3 that a woman had been driving recklessly on I-74 in Ripley and Dearborn counties. 50-year-old Lisa Marie Hancock was driving a […]
JOHNSON COUNTY, IN・2 DAYS AGO
FOX59

A Bluffton woman was found dead more than a month after she went missing.
BLUFFTON, IN・13 HOURS AGO
FOX59

GRANT COUNTY, Ind. — A Madison County man has died following a vehicle pursuit that concluded with a motorcycle crash in Grant County. Alexandria police attempted to stop 62-year-old Gary Stone, the driver of a 2019 Harley Davidson motorcycle, for a traffic stop Tuesday afternoon. Stone ignored these instructions and continued traveling northbound in an […]
MADISON COUNTY, IN・1 DAY AGO
FOX59

INDIANAPOLIS — An Indianapolis man has been arrested for his alleged involvement in two murders and a rape. The U.S. Marshals Service announced Tuesday morning that it had arrested Kristopher Davis for several charges including rape, strangulation, criminal confinement, domestic battery and burglary in Marion County. Davis was arrested on Jan. 31 by the Marshal […]
INDIANAPOLIS, IN・1 DAY AGO
FOX59

1 dead in shooting on Indy’s east side

INDIANAPOLIS — Police are investigating a deadly shooting on the city’s east side. According to the Indianapolis Metropolitan Police Department, officers were called to the 2900 block of N. Chester Avenue at approximately 12:13 p.m. on report of shots fired. Police reported arriving on scene and locating an adult male with a gunshot wound. Police […]
INDIANAPOLIS, IN・13 HOURS AGO
FOX59

Man arrested, Indianapolis firefighter in hospital after near east side arson fire

INDIANAPOLIS — A man has been arrested for arson following a fire Indy’s near east side that put an IFD firefighter into a coma. Indianapolis Fire Department crews were called around 3:50 p.m. Monday to the intersection of Massachusetts Avenue and Rural Street for a vacant residence that was on fire. Upon arrival, 12 IFD […]
INDIANAPOLIS, IN・5 HOURS AGO
FOX59

Nearly 10 years after a Muncie woman went missing after a family reunion, police have a woman in custody in connection with the case.
MUNCIE, IN・9 HOURS AGO
FOX59

INDIANAPOLIS — While investigating a robbery, armed carjacking and an officer-involved shooting – all within the last week and a half – IMPD found three guns with Glock switches. “It’s a device that’s put on a semi-automatic gun that turns it into an automatic gun or a machine gun,” said Lt. Shane Foley, an IMPD […]
INDIANAPOLIS, IN・1 DAY AGO
FOX59

INDIANAPOLIS – Indianapolis Metropolitan police made two additional arrests in connection with a December kidnapping and murder plot. On Feb. 2, IMPD VCU detectives located 17-year-old D’Sean Bigbee-Cummings, who was wanted on a kidnapping and murder warrant. The next day, on Feb. 3, 16-year-old Daniel Jackson turned himself in. Police had previously arrested three other […]
INDIANAPOLIS, IN・2 DAYS AGO
FOX59

IMPD to review if training was followed in Maclin shooting

INDIANAPOLIS — Indianapolis Mayor Joe Hogsett told FOX59 News that he found it “difficult” to watch the recently released body-worn camera video of three IMPD officers shooting a man who had been asleep in a car with a gun in his lap in the 3600 block of North Oxford Street on the morning of Dec. […]
INDIANAPOLIS, IN・8 HOURS AGO
FOX59

Woman credits dog for saving her from house fire

A dog sensing something was wrong woke its owner up in time to save her from a fire Wednesday.
CHESTERFIELD, IN・10 HOURS AGO
FOX59

KOKOMO, Ind. — It has been 10 years since a woman was shot to death inside her Kokomo home. Police continue to push for answers in this unsolved murder. On February 7, 2013, officers with the Kokomo Police Department were called to the 800 block of James Drive after they received a report of a […]
KOKOMO, IN・1 DAY AGO
FOX59

INDIANAPOLIS — A 29-year-old is accused of murder in connection to a double shooting from November that left a man dead and a woman injured. According to the Indianapolis Metropolitan Police Department, Tony Miller Jr. was arrested four days after the November double shooting for possession of a handgun by a felon. Police originally reported […]
INDIANAPOLIS, IN・1 DAY AGO
FOX59

HOWARD COUNTY, Ind. — Yellow crime scene tape isn’t something folks in near Arundel Drive in Howard County really ever see. It showed up around 11 a.m. Tuesday, along with news of a death investigation involving the Howard County Sheriff’s Office, Howard County Coroner and Indiana State Police in the 1100 block of Arundel. ”It’s […]
HOWARD COUNTY, IN・8 HOURS AGO
FOX59

INDIANAPOLIS – After arresting more than a dozen people in connection with a large drug trafficking operation in central Indiana, the last two remaining defendants have been convicted. A federal grand jury returned guilty verdicts against 36-year-old Rick Coley and 40-year-old David Duggar following an eight-day trial, according to the Department of Justice. Coley was […]
INDIANAPOLIS, IN・1 DAY AGO