California reporting 'very high' flu activity, among the worst in US 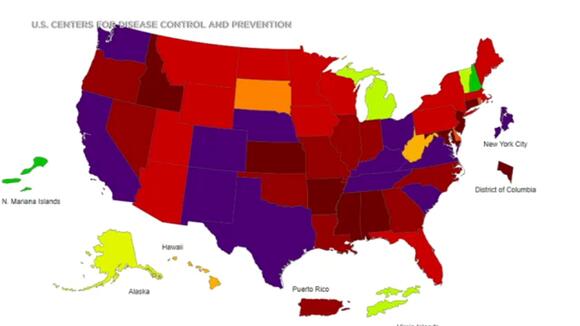 California is reporting what the Centers for Disease Control and Prevention described as "very high" flu levels as cases surge nationwide. A map released by the CDC shows California and 10 other states in the top "very high" category. Nationwide, flu hospital admissions almost doubled last week. Visits to doctors' offices, urgent care and emergency rooms are the highest they have been in the last decade. In Los Angeles County, flu rates have reached 25% -- a level not seen at this time of year in the past four years, many of them are children. "We are seeing a tremendous number of children with Influenza A," Dr. Anthony Cardillo, an emergency room specialist and CEO of Mend Urgent Care, said in an interview with ABC7. "That's because they're back in school, they're in athletics, they're doing different things, a lot of transmission is happening. "The only difference this year is this flu virus is very, very strong. It's had time to mutate. And that's what we're seeing now." The annual winter flu season usually doesn't get going until December or January, but this one began early and has been complicated by the simultaneous spread of other viruses.

Flu, COVID and RSV are all viruses that may all seem like the common cold at first, but there are slight differences that can help parents get a sense of what is going on.

The measure of traffic in doctor's offices is based on reports of symptoms like coughs and sore throats, not on lab-confirmed diagnoses. So it may include other respiratory illnesses. That makes it hard to compare to flu seasons from before the COVID-19 pandemic. Other years also didn't have this year's unusually strong wave of RSV, or respiratory syncytial virus, a common cause of cold-like symptoms that can be serious for infants and the elderly. Flu shots are recommended for nearly all Americans who are at least 6 months old or older. The Associated Press contributed to this report. ¿Quieres leer este artículo en español? Haz clic aquí

You already shot your wad!! Let’s talk about something else.. like illegal boarder crossings and inflation and crappy energy policy and Biden family corruption!! And the fact that he is compromised

Huh. I guess when you keep people masked up and have their immune systems drop as a result, when you come back into the world you no longer have the strong immune system you once did.

lmao so what, if you get sick then you get sick it’s not the end of the world write about something interesting

Join ABC7 for 'Guns in California: Searching for Solutions'

In the wake of the tragic mass shootings in Monterey Park and Half Moon Bay, ABC7 is taking a closer look at the efforts to address gun violence.
MONTEREY PARK, CA・1 DAY AGO
ABC7

The mountain snowpack that supplies a significant amount of California's water got an incredible boost from recent powerful storms and is outpacing the state's wettest season on record.
CALIFORNIA STATE・21 HOURS AGO
ABC7

Los Angeles received $60 million in federal funding to address homelessness as part of what officials described as a first-of-its-kind grant from the Department of Housing and Urban Development.
LOS ANGELES, CA・15 HOURS AGO
ABC7

'We are not where we should be.' Experts weigh in on crime data systems across SoCal and the US

Our new Neighborhood Safety Tracker gathers crime and safety information across Southern California. But how is all that data reported, and why do some agencies have more up-to-date data than others?
LOS ANGELES, CA・3 DAYS AGO
ABC7

One of the bills would increase the penalties for serial thieves and another would reinstate a mandatory 20-year minimum sentence for anyone convicted of using a firearm during a violent crime.
CALIFORNIA STATE・3 DAYS AGO
ABC7

Many Southern California residents were left stunned when they saw their most recent SoCalGas bill, but it was even more shocking for business owners.
PASADENA, CA・1 DAY AGO
ABC7

CA mountain lions being killed on roads, highways faster than they can reproduce, study shows

As Los Angeles prepares to celebrate the life of P-22, a new study shows that mountain lions are being killed on California roads and highways faster than they can reproduce.
LOS ANGELES, CA・1 HOUR AGO
ABC7

Families of those killed in the Alaska Airlines disaster off Port Hueneme gathered at a memorial to remember their loved ones with a special ceremony.
PORT HUENEME, CA・1 DAY AGO
ABC7

Gov. Gavin Newsom and other state leaders say a new gun safety measure will go before lawmakers this year, promising to make sure licenses for concealed-carry weapons won't end up in the wrong hands.
CALIFORNIA STATE・1 DAY AGO
ABC7

A man sued Los Angeles County, alleging he was wrongfully battered by sheriff's deputies when he found himself incidentally in the middle of a wild televised chase.
LOS ANGELES COUNTY, CA・21 HOURS AGO
ABC7

Students, activists and community leaders are not giving up their fight to close a metal recycling plant in Watts. Students at nearby Jordan High are concerned over dust, loud noise, contamination and projectiles.
LOS ANGELES, CA・2 DAYS AGO
ABC7

Will you have to pay taxes on the California Middle Class Tax Refund you received? Maybe

"I would hope and imagine that the IRS within the next month would come out with some ruling," said one IRS enrolled agent.
CALIFORNIA STATE・16 HOURS AGO
ABC7

LAPD: No evidence of planned mass shooting by man found with cache of weapons in Hollywood high-rise

LAPD said there isn't any evidence that a mass shooting was planned by a man who stockpiled guns and ammunition in his Hollywood high-rise apartment.
LOS ANGELES, CA・9 HOURS AGO
ABC7

SoCalGas customers may get some relief when paying their natural gas bills as early as next month.
CALIFORNIA STATE・2 DAYS AGO
ABC7

About 2,000 employees in Vernon will be without jobs.
VERNON, CA・10 HOURS AGO
ABC7

A 2.9-magnitude earthquake was reported in the Sylmar area Wednesday afternoon, according to the U.S. Geological Survey.
1 DAY AGO
ABC7

Security surveillance camera images of Andrew Alan Hernandez inside the Capitol Building on the day of the insurrection showed him carrying an American flag with a Go-Pro camera zip-tied to the pole.
JURUPA VALLEY, CA・3 DAYS AGO
ABC7

The Ventura County Sheriff's office confirms the body of 22-year-old Zachary Zernik was found Thursday, at the base of a cliff in the Boney Mountain State Wilderness Area.
VENTURA COUNTY, CA・9 HOURS AGO