Family of 3 on board plane that crashed into Gulf, Venice police say 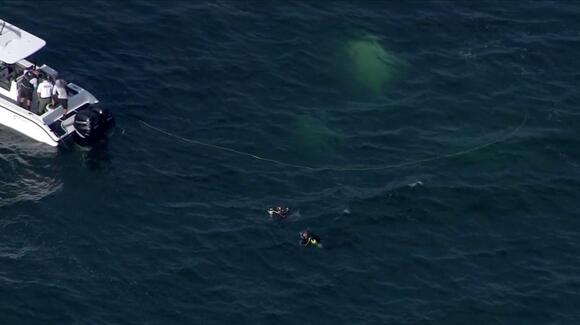 VENICE, Fla. (WFLA) — Authorities continue to search for the pilot of a small aircraft that crashed off the Florida coast Saturday with two other passengers on board.

According to Venice Police Chief Charlie Thorpe, a small single-engine Piper Cherokee aircraft, rented and piloted by a 42-year-old man left the Venice Municipal Airport at 7:30 p.m. Saturday with two other family members on board.

U.S. Coast Guard search and rescue crews along with local first responders searched for hours over the weekend before finding the aircraft about one-third of a mile into the ocean, just west of the airport. Authorities said the aircraft was about 15 feet underwater.

As of the latest information, the 42-year-old pilot is still missing.

Rare December disturbance pops up in the Atlantic

“The search area is encompassing at least a five square mile search area just south of where the aircraft was found yesterday,” Thorpe said. “A lot of that is based off of the time, tides, currents, conditions, all that kind of stuff.”

Thorpe said the pilot did not signal a mayday.

The National Transportation Safety Board the plane’s wreckage would be taken to a warehouse in Jacksonville for examination after recovery.

Additional information was not released.

While Gasparilla is fun for Tampa residents, it can prove dangerous for any manatees that might wander into the middle of the invasion.
TAMPA, FL・17 HOURS AGO
WFLA

"No one prepares you for that," George Rovolis' brother said. "There's no guide, no manual for any of that."
SAINT PETERSBURG, FL・1 DAY AGO
WFLA

He suffered serious injuries and was taken to an area hospital, where he later died.
LARGO, FL・1 DAY AGO
WFLA

Fire officials are investigating what caused a yacht to catch fire in Ruskin on Thursday.
RUSKIN, FL・2 DAYS AGO
WFLA

A 39-year-old father was arrested after his child reportedly arrived at a Florida elementary school with a handgun in a backpack.
TAMPA, FL・1 DAY AGO
WFLA

The department said they're bringing in around 15 specially trained tactical dispatchers to handle the massive amount of information tomorrow. Officials said there will be so many cops, dispatchers will have information even before a 911 call comes in.
TAMPA, FL・1 DAY AGO
WFLA

Hundreds of pirates invaded the city of Tampa Saturday during the Gasparilla Invasion.
TAMPA, FL・14 HOURS AGO
WFLA

Make way, mateys! The pirates have captured the city of Tampa and are sharing their treasure with everyone along the parade route.
TAMPA, FL・12 HOURS AGO
WFLA

A teenage boy and girl linked to a spree of crimes across the City of Tampa were arrested Wednesday, officials said.
TAMPA, FL・2 DAYS AGO
WFLA

The Tampa Hillsborough Expressway Authority announced plans to make improvements to the southern portion of the Selmon Expressway and its underpasses.
TAMPA, FL・2 DAYS AGO
WFLA

FWC cracking down on BUI this Gasparilla

The Jose Gasparilla will emerge at the south end of Hillsborough Bay on Saturday followed by hundreds if not thousands of boats.
TAMPA, FL・2 DAYS AGO
WFLA

Every year, hundreds of thousands of pounds of beads are tossed during the parade of pirates. The Tampa Police Department Dive Team has already been working to make sure pirate treasure stays out of the waterways.
TAMPA, FL・1 DAY AGO
WFLA

VIDEOS: Relive all the pirate-filled festivities of Gasparilla 2023

Ahoy there! Whether you're staying in for the Gasparilla festivities or want to relive all the fun, WFLA has all the events on video so you can watch all the pirate-y fun!
TAMPA, FL・12 HOURS AGO
WFLA

Backyard chickens: Is it legal to keep chickens in Tampa & St. Pete?

As egg prices remain elevated, where in Tampa Bay can you keep chickens to get your eggs at home?
TAMPA, FL・11 HOURS AGO
WFLA

What to do with your beads after Gasparilla

Arguably one of the best things about Gasparilla is collecting as many necklaces as possible during the parade. But what should you do with those necklaces once the parade is over?
TAMPA, FL・2 DAYS AGO
WFLA

hoy, me mateys! Pirates are invading Tampa for this year's Gasparilla.
TAMPA, FL・20 HOURS AGO
WFLA

25 Floridians were charged in a wire fraud scheme that federal justice officials say sold thousands of fake nursing licenses across the U.S.
TAMPA, FL・2 DAYS AGO