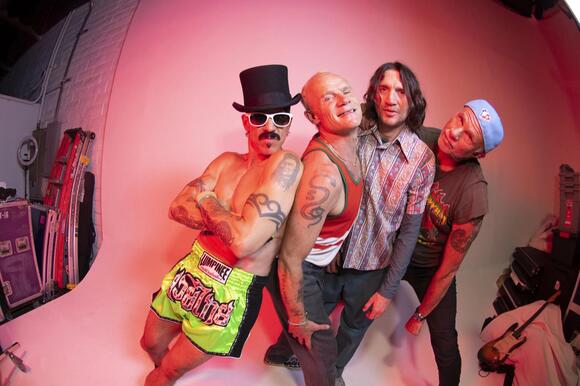 LAS VEGAS (KLAS) — Red Hot Chili Peppers kick off a 23-date global tour on March 29, 2023 that will be followed by shows in numerous cities including Las Vegas, according to Live Nation.

The tour begins in Vancouver, British Columbia, and ends in Glasgow, Scotland. The rock band will perform in Las Vegas at Allegiant Stadium on Saturday, April 1, 2023. They will be joined by St. Vincent and King Princess.

The band had two album releases this year that reached number 1, the first time for a rock band to do that in 17 years, Live Nation said.

Carlos Santana Returns To Electrify the House of Blues Stage

Las Vegas(KLAS)-January is national hobby month. Some people love to knit as a hobby, some love to collect baseball cards, and some like to play – pickleball? Pickleball pro Miles Reynolds and his family join Kendall Tenney to tell us about the fun sport.
LAS VEGAS, NV・1 DAY AGO
8 News Now

The impact of "Dropicana" is being felt by more than just drivers as businesses along the stretch say they already feel the effects of the project.
LAS VEGAS, NV・15 HOURS AGO
8 News Now

Rhinelander vs. Jones: A media scandal for the decade. And it reached the dusty, desert city of Las Vegas, where the husband, the man wealth and social status, fled in secrecy and lived for a time under an assumed name.
LAS VEGAS, NV・2 HOURS AGO
8 News Now

Las Vegas(KLAS)-If you’ve always dreamed of driving you car on a race track, now’s your chance to do it for a great cause. Kendall Tenney chats with Paulette Anderson, executive director of Speedway Children’s Charities to talk about Laps For Charity at Las Vegas Motor Speedway. The event is happening this Sunday from noon to […]
LAS VEGAS, NV・1 DAY AGO
8 News Now

Oakland A’s running out of time to find new home in Oakland, or commit to Las Vegas

The Oakland Athletics have spent years trying to get a new stadium while watching Bay Area neighbors such as the Giants, Warriors, 49ers and Raiders successfully move into state-of-the-art venues, and now time is running short on their efforts.
LAS VEGAS, NV・1 DAY AGO
8 News Now

Get a chance to win Super Bowl tickets by donating blood

Every two seconds someone in the U.S. needs a blood transfusion but less than 5% of the population donates on a regular basis. Now there is a chance to do two amazing things at the same time, save a life and win Super Bowl tickets.
LAS VEGAS, NV・2 DAYS AGO
8 News Now

Las Vegas(KLAS)-He is one of the rising talents in comedy who also happens to be a friend of Las Vegas Now. Kendall Tenney chats with Michael Yo about his life and upcoming shows at the Jimmy Kimmel’s Comedy Club this weekend.
LAS VEGAS, NV・2 DAYS AGO
8 News Now

LAS VEGAS (KLAS) — You can drive at the Las Vegas Motor Speedway, even without a NASCAR contract. It’s part of the Laps for Charity fundraiser for Speedway Children’s Charities. The event takes on Sunday, Jan. 29, at the speedway. You can bring your personal vehicle and drive on the track that NASCAR drivers use […]
LAS VEGAS, NV・3 DAYS AGO
8 News Now

On Sunday, Feb. 5 the nation will be watching to see how the new NFL Pro Bowl format will play out here at Allegiant Stadium. The NFL is now giving us a look at the redesigned field that will be created to host new skills competitions and a flag football game.
LAS VEGAS, NV・2 DAYS AGO
8 News Now

The gold Trump International Hotel in Las Vegas inspires haters on Twitter enough to earn a spot in the Top 10 ugliest buildings in the world.
LAS VEGAS, NV・1 DAY AGO
8 News Now

Millions of Taylor Swift fans are holding onto their bad blood with Ticketmaster, which has landed the distributor giant in front of US senators.
LAS VEGAS, NV・3 DAYS AGO
8 News Now

LAS VFEGAS (KLAS) — A 22-year old hiker reported missing since Jan. 24 was found dead in the Red Rock Canyon area, according to sources. Luke Saunders, who was also an airman at Nellis Air Force Base, was last seen around 5:30 p.m. near the Spring Mountain and Red Rock Canyon area, police had reported. […]
LAS VEGAS, NV・1 DAY AGO
8 News Now

Tropicana transforms to ‘diverging diamond’ when bridge reopens on Monday

When the Tropicana Avenue overpass reopens on Monday, lanes will be redrawn into a "diverging diamond" that is expected to handle traffic better during ongoing construction.
LAS VEGAS, NV・1 DAY AGO
8 News Now

‘I am sickened beyond words to express my horror,’ Las Vegas community reacts to video of violent arrest of Tyre Nichols during Memphis traffic stop

Las Vegas and Nevada officials are reacting to the violent arrest of 29-year-old Tyre Nichols after body cam footage and street surveillance footage were made public Friday.
LAS VEGAS, NV・17 HOURS AGO