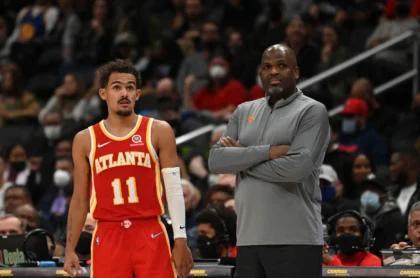 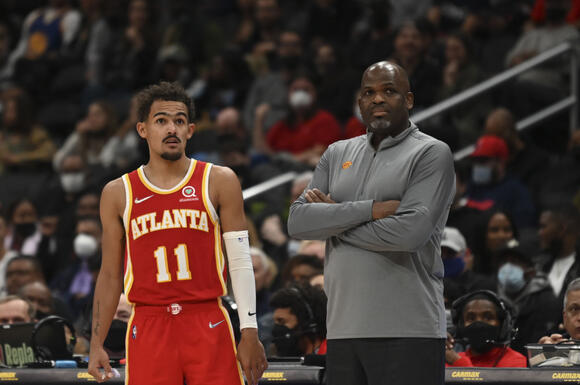 The Atlanta Hawks’ previous game against the Denver Nuggets ended in a 117-109 victory as they improved to a 13-10 record. However, one key member of Atlanta’s lineup was missing during the game.

Let’s dive into the latest details of the tension rising in the Hawks’ locker room stemming from the game against Denver.

Details behind Trae Young’s missed game against the Denver Nuggets

Despite a victory against Denver, the Hawks walked away from that game with bigger concerns as their star player and head coach had a dispute that led to him not attending the event.

According to The Athletic’s Shams Charania, Trae Young and head coach Nate McMillan had an exchange during Friday’s shootaround that led to the point guard not attending the game that night.

The Athletic said Young was receiving treatment on his right shoulder and McMillan asked if he was going to participate during the shootaround. Citing his desire to focus on treatment, Young was planning to miss it.

This did not it well with the head coach who told his star player that he either needed to play off the bench or not show up to the arena that night. Young decided he would not show up for the game.

It seems pretty surprising to see how that transpired but there was no discipline toward Young or McMillan after the situation, according to Charania. However, this is not the first time conflicts have needed to be settled.

The Athletic reported that Atlanta has held multiple team meetings throughout the seasons to resolve various situations that have taken place. There certainly appears to be issues going on within the locker room.

Plus, Young’s leadership approach is also being questioned by many people within the organization. This was reiterated alter as key personnel in the organization want the point guard to be a more productive and positive face of the franchise.

This is a delicate situation the Hawks need to handle if they want Young to remain with the organization long-term. However, McMillan’s place as head coach might be even more debatable.

Coming off a first-round exit against the Miami Heat last season, the Hawks needed to jump back and improve if McMillan wanted to keep his name off the hot seat moving forward.

However, with the latest reports coming out of Atlanta, it would be understandable if his clock might be ticking a little bit faster than previously anticipated. The Athletic also had a report on his place as Atlanta’s head coach.

According to Charania, many executes across the league who are aware of the latest situation in Atlanta are wondering what this means for the future of McMillan. As of now, his job appears to be safe after a 13-10 record to start the year.

It is clear that Atlanta needs to solve its issues moving forward. If not, there is not a realistic opportunity for the team to truly compete during the 2022-’23 season. It will take some healing on both sides for Young and McMillan.

The head coach led Atlanta to an Eastern Conference finals in 2021 so there is previous success. It simply will all come down to whether the issues within the team can be sorted out in a proper manner.

The Hawks have a talented rotation but the chemistry issues will always make it null. Atlanta has some work to do as it hopes the situation does not continue on this current trend into the future.

The Los Angeles Lakers and Utah Jazz are reportedly discussing a trade centering Russell Westbrook. What would a potential deal look like?
LOS ANGELES, CA・2 DAYS AGO
Sportsnaut

Quarterback Stetson Bennett IV will go down as one of the best quarterbacks in Georgia Bulldogs history, winning two national
ATHENS, GA・19 HOURS AGO
Sportsnaut

The Tampa Bay Buccaneers have several decisions to make this offseason after a disappointing 8-9 campaign. Obviously, the focus is
TAMPA, FL・2 DAYS AGO
Sportsnaut

While this year’s NBA trade deadline could be quieter than years past, the New York Knicks and Utah Jazz are
SALT LAKE CITY, UT・1 DAY AGO
Sportsnaut

In 2015, the Philadelphia 76ers selected 6-foot-10 center Jahlil Okafor of Duke with the No. 3 overall pick of the
PHILADELPHIA, PA・1 HOUR AGO
Sportsnaut

The Indianapolis Colts coaching search is one of the longest in NFL history, but interim coach Jeff Saturday reportedly remains
INDIANAPOLIS, IN・1 DAY AGO
Sportsnaut

Every year around this time, we hear several wild stories about various Super Bowl bets. Sometimes it’s something ridiculous, like
PHILADELPHIA, PA・23 HOURS AGO
Sportsnaut

Kyrie Irving is reportedly preparing to sit out the rest of the 2022-23 NBA season if the Brooklyn Nets do not move him before the trade deadline.
BROOKLYN, NY・2 HOURS AGO
Sportsnaut

The Brooklyn Nets will keep disgruntled guard Kyrie Irving on the bench until they can work out a trade for
CLEVELAND, NY・35 MINUTES AGO
Sportsnaut

Free agent guard Kia Nurse signed a contract with the Seattle Storm on Friday. Terms of the deal were not
SEATTLE, WA・1 DAY AGO
Sportsnaut

Like many teams in the Western Conference, the Portland Trail Blazers have flashed signs of being a playoff contender, but
PORTLAND, OR・21 HOURS AGO
Sportsnaut

The Sacramento Kings currently sit third in the Western Conference, ascending the NBA standings and in a position to end
SACRAMENTO, CA・3 HOURS AGO
Sportsnaut

If the massive divide between the Baltimore Ravens and superstar quarterback Lamar Jackson were to continue to be insurmountable, there
BALTIMORE, MD・1 DAY AGO
Sportsnaut

The Western Conference-leading Denver Nuggets aim for their fourth straight win on Sunday when they visit the Minnesota Timberwolves in
DENVER, CO・12 HOURS AGO
Sportsnaut

As Green Bay Packers quarterback Aaron Rodgers contemplates his future and whether or not he wants to play for another
GREEN BAY, WI・2 HOURS AGO
Sportsnaut

Nikola Jokic recorded his 18th triple-double of the season and Jamal Murray scored a season-high 41 points to give the
DENVER, CO・13 HOURS AGO
Sportsnaut

Cam Thomas scored 19 of his career-high 44 points in the fourth quarter and converted the go-ahead three-point play with
WASHINGTON, DC・16 HOURS AGO