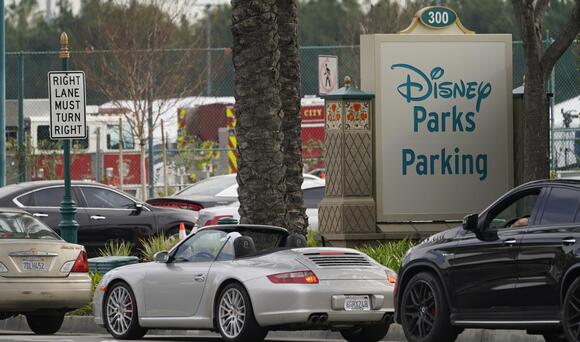 A California elementary school principal is dead after jumping from a parking structure at Disneyland over the weekend.

Anaheim Police said a call about a man jumping from a Disneyland parking structure came in around 9 p.m. Saturday, according to FOX 11. On Sunday, the Orange County coroner identified the man as Christopher Christensen. His death was said to be a suicide .

Christensen, 51, was the principal at William T. Newland Elementary School in Huntington Beach, California. He had also spent 22 years in the nearby Fountain Valley School District, working as the principal of three other schools.

On Saturday, Christensen posted a lengthy message on Facebook.

TIM ALLEN ON KEEPING ‘CHRIST’ IN CHRISTMAS: ‘IT LITERALLY IS A RELIGIOUS HOLIDAY’

“I hate when people leave this Earth with so many unanswered questions,” Christensen wrote. “So, I hope this provides some insight and perspective.”

Christensen explained how he and his wife had gotten into a “heated argument” that led to him being arrested after his wife called the police. He denied physically hurting his wife or his stepdaughters and suggested his wife “truly regrets making that call, because the events of that night have completely unraveled both of our lives.”

“I am on the brink of losing my job, as I am out on administrative leave until my case is ‘resolved.’ However, the legal system is extremely flawed (especially against men/fathers) and it’s sickening how quickly and easily an innocent man can be thrown in jail based on zero evidence or proof!” Christensen wrote. “So, here I am … writing my final FB post to all of you. I need you all to know that a gentle, kind, loving and sincerely good man has been destroyed by one unfortunate night. It really is unfortunate!”

Christensen faced charges of child endangerment and battery and was due in court Monday for a pretrial hearing. He had pleaded not guilty to both charges, according to the Los Angeles Daily News.

“Please remember me for all the good I brought to the world of education,” Christensen wrote.

Christensen is survived by his wife, three children, and two stepchildren.

That night was what set it all of this into motion and he knew his life was over. His wife will have to live with that for the rest of her life and his two step daughter’s. I’m glad I don’t have to live with conscience l!

how sad that this man felt that there was no other way to fix his problems and decided to end his life. he may have believed that this would resolve everything, but in actuality it only makes it harder for the loved ones that he left behind. imagine the guilt that his wife must feel after this. Unbearable....

Rep. Adam Schiff (D-CA) is facing an early obstacle to his 2024 Senate bid after a nonprofit ethics organization filed a complaint to the Office of Congressional Ethics accusing the California Democrat of using government resources to boost himself politically.
CALIFORNIA STATE・3 DAYS AGO
Herbie J Pilato

Dino Martin, the son of legendary crooner Dean Martin, was a multi-talented performer just like his father. But his life was cut much too short, long before his famous dad passed away.
3 DAYS AGO
Whiskey Riff

A pitbull is one of the most fierce dogs out there. They have a reputation of being a mean and harmful dog, but that is generally not the case at all. In reality they are one of the most friendly and human loving dogs out there. They are more loyal than anything else, and attacks are usually a result of intentionally violent training or improper training.
CHULA VISTA, CA・1 DAY AGO
WashingtonExaminer

The zookeeper who was severely mauled by a black bear on anxiety medications left a door open, allowing the bear to leave its enclosure, according to new findings released by the Florida Fish and Wildlife Conservation Commission.
JACKSONVILLE, FL・3 DAYS AGO
WashingtonExaminer

There are 10 days left before recipients of Social Security retirement money start receiving their monthly payment of up to $4,194 for the month of February.
1 DAY AGO
WashingtonExaminer

Federal prosecutors considered pressing charges against former President Donald Trump shortly after he left office for campaign finance violations but ultimately decided against it, according to a new book.
WASHINGTON STATE・3 DAYS AGO
WashingtonExaminer

A four-star Air Force general sent a memo to the officers he commands informing them of his belief, and the preparations expected for a U.S. war with China by 2025.
WASHINGTON STATE・2 DAYS AGO
WashingtonExaminer

Stimulus update: Direct payments worth up to $1,500 getting sent to Colorado taxpayers in three days

Residents of Colorado are set to receive a tax rebate of up to $1,500 in three days if they have filed their 2021 taxes.
COLORADO STATE・2 DAYS AGO
WashingtonExaminer

A New Jersey school bus crashed into a home Friday morning after dropping off its students.
WEST CALDWELL, NJ・3 DAYS AGO
WashingtonExaminer

A Jewish man who was saved by a Belgian family as a child during the Holocaust was reunited with descendants of his rescuers for the first time, nearly 80 years later.
WASHINGTON STATE・3 DAYS AGO