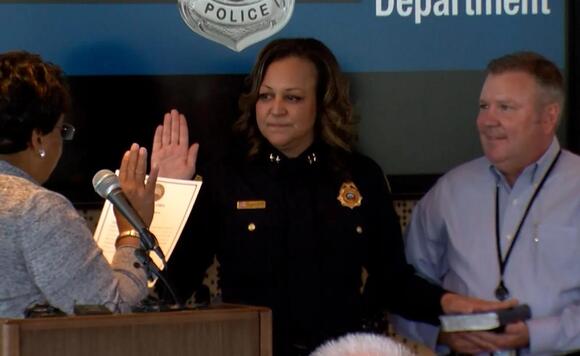 TAMPA, Fla. (WFLA) — Tampa police Chief Mary O’Connor resigned Monday, according to a release from the City of Tampa.

On Nov. 12, O’Connor and her husband were pulled over in Oldsmar for driving in a golf car without a license plate. Body cam video showed her tell Deputy Larry Jacoby that she was Tampa’s police chief while flashing her badge.

“I’m hoping you’ll just let us go tonight,” she was heard saying before handing him her card.

This was not the first time O’Connor had been involved in a traffic-related incident during her time with the Tampa Police Department.

O’Connor was previously fired from the Tampa Police Department after she was arrested for battery on a law enforcement officer in 1995. However, she was reinstated the following year.

In O’Connor’s resignation letter , the former police chief said she was resigning to preserve the public’s trust in the police department.

“I would never want my personal mistake to stand in the way of the progress I have made in mending relationships between the police department and the community, so for that reason, I am resigning,” she said.

Castor called O’Connor’s behavior “unacceptable,” saying any public officials should not use their position to ask for special treatment.

“This is especially disappointing because I gave Mary O’Connor a second chance, as I believe in second chances for people,” the mayor said. “Which is one of the reasons that the disappointment today runs so deep. I had high hope for Chief O’Connor, as she was off to such a strong start by reducing violent gun crime, proactively engaging with our community, and focusing on officer wellness. But these accomplishments pale in comparison to the priority I place on integrity.”

Prior to O’Connor’s resignation, other local officials condemned the former chief’s actions.

The Tampa Police Department also released a statement saying it was committed to serving its community despite the recent controversy:

The Tampa Police Department does not want the resignation of Chief Mary O’Connor to [distract] from the skilled work and professionalism provided to our community everyday. We want our community to know that our dedication to protecting our residents and building relationships [with] those we serve will continue through the nearly 1,400 dedicated public servants of #YourTampaPD .

Bercaw is a 25-year veteran of the Tampa Police Department and has been part of developing crime reduction strategies to make Tampa safer, according to the city.

At this time, it is not known exactly how long it will take to replace O’Connor, but Castor said she believes it will take several months.

When asked what significance the Chief’s resignation might have on her campaign for Tampa Mayor, Castor said it’s up to the voters to make those decisions.

8 On Your Side has reached out for a statement from the Pinellas County Sheriff’s Office for comment on its deputy’s conduct.

14 arrested in Tampa street racing operation over the weekend

Tampa police officers said they arrested 14 people in a street racing operation over the weekend.
TAMPA, FL・18 HOURS AGO
WFLA

Tyre Nichols' death set off protests across the nation, bringing thousands of people to the streets, including downtown St. Petersburg. The night before St. Petersburg Mayor Ken Welch is set to take to the steps of City Hall, the city's own protestors occupied the ground, demanding an end to police brutality.
SAINT PETERSBURG, FL・1 DAY AGO
WFLA

Hernando County sheriff's deputies shot and wounded two people after one of them opened fire on officers Sunday
BROOKSVILLE, FL・17 HOURS AGO
WFLA

An estimated 300,000 revelers lined the streets of downtown Tampa on Saturday for the 2023 Gasparilla Invasion and Parade of Pirates, the third-largest parade in the country.
TAMPA, FL・21 HOURS AGO
WFLA

Only 1 name on Tampa mayor ballot in March

There will only be one name printed on the ballot for the next Tampa mayor election in March — Jane Castor.
TAMPA, FL・1 HOUR AGO
WFLA

"This is something that doesn't happen in Lakeland," Police Chief Sam Taylor said. "I have never worked an event where this many people have been shot at one time."
LAKELAND, FL・15 HOURS AGO
WFLA

LAKELAND, Fla. (WFLA) – The Lakeland Police Department in partnership with Heartland Crime Stoppers Florida is offering a $5,000 reward for information leading to the identification and arrest of suspects involved in the shooting that injured 10 people. Lakeland Police Chief Sam Taylor held a briefing Monday evening. He said officers were called to an […]
LAKELAND, FL・2 HOURS AGO
WFLA

St. Petersburg Mayor Ken Welch announced his choice for the redevelopment of the Tropicana Field site Monday during the State of the City address.
SAINT PETERSBURG, FL・1 DAY AGO
WFLA

Firefighters staged a dramatic rescue Monday of a K-9 that got himself stuck in a Tampa pond.
TAMPA, FL・22 HOURS AGO
WFLA

SARASOTA, Fla. (WFLA) — Friday night was a busy one for Sarasota Police Department’s Traffic Unit. They were called out to two separate hit-and-run crashes within less than 30 minutes. The crashes happened within a short stretch of Fruitville Road. The first took place near the Orange Avenue intersection downtown. Authorities said a 56-year-old man […]
SARASOTA, FL・17 HOURS AGO
WFLA

he Tampa Police Department is investigating after a mother was found dead next to her sleeping child on Monday night.
TAMPA, FL・5 HOURS AGO
WFLA

A part of southbound I-275 was partially closed after a multi-vehicle crash in Tampa, according to police.
TAMPA, FL・1 DAY AGO
WFLA

Take your Gasparilla beads to Florida Aquarium for discount

The Florida Aquarium is offering a discount to those who drop-off a five-gallon bucket full of Gasparilla beads before February 12th.
TAMPA, FL・14 HOURS AGO
WFLA

Hundreds of pirates invaded the city of Tampa Saturday during the Gasparilla Invasion.
TAMPA, FL・2 DAYS AGO
WFLA

Hillsborough County students celebrated 100 days of school Monday by dressing up like they were 100 years old.
HILLSBOROUGH COUNTY, FL・14 HOURS AGO
WFLA