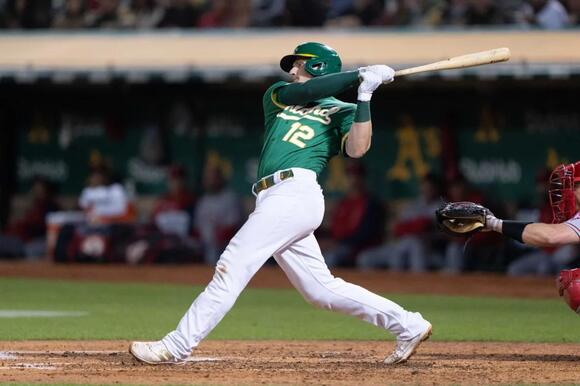 Oakland Athletics catcher Sean Murphy is one of the biggest names expected to be moved during the MLB Winter Winter and a blockbuster deal involving the Gold Glove Award winner could be imminent.

Reports surfaced on Sunday that Oakland was getting close to moving one of its best players. The Atlanta Braves were originally viewed as the favorites to land him at the time, but the market has reportedly changed dramatically entering Monday.

According to MLB Network’s Mark Feinsand , the St. Louis Cardinals, Cleveland Guardians, Boston Red Sox and Tampa Bay Rays are among the teams in the mix. Importantly, the Athletics remain on track to trade Murphy soon.

Notably, per Feinsand, the Braves have seemingly dropped out of the mix. It’s not a huge surprise, especially with both Travis d’Arnaud and William Contreras under contract for the 2023 season. Ultimately, the asking price likely reached a point where Atlanta felt it was too much to pay to address a position that wasn’t a weakness.

Oakland’s motivation for moving one of its best players is obvious. The Athletics are locked into a multi-year rebuild and currently trying to put together a farm system that rapidly declined in recent years.

The 2022 MLB offseason is also the perfect time to move Murphy, with more clubs willing to make moves and his cost elevated because he is under contract through 2025.

Sean Murphy’s impact on his next team

Any team that acquires Murphy isn’t expecting the 28-year-old catcher to be an All-Star hitter. Among catchers this past season, he ranked sixth in wRC+ (122), SLG (.332) and finished eighth in OPS (.759).

Murphy ranked as the best catcher in Catcher Framing Runs among those who caught at least 3,000 pitches. He also finished ninth in strike rate (49.7%), despite plenty of shakiness from the Athletics’ rotation.

The 6-foot-3 catcher is also reliable with his arm behind the plate. Murphy finished with the sixth-most caught runners caught stealing (19) during the regular season. Among catchers with 900-plus innings, he allowed the second-fewest steals (42).

We’ve seen the Cardinals, Rays and Red Sox all place an emphasis on defense-first catchers in recent years. Whichever team lands Murphy will have a candidate to win the Gold Glove Award and a leader who the pitching staff trusts to call games and frame the strike zone.

Every NFL team will have its own unique priorities this offseason. For the Baltimore Ravens, no other task is greater
BALTIMORE, MD・2 DAYS AGO
Sportsnaut

Do the St. Louis Cardinals have an unwitting cure for some of the game’s worst ills? If so, the answer
SAINT LOUIS, MO・12 HOURS AGO
Sportsnaut

Matt Nagy returned to the Kansas City Chiefs coaching staff in 2022 after being fired as the Chicago Bears head
KANSAS CITY, MO・1 DAY AGO
Sportsnaut

The Brooklyn Nets and Kings are finalizing a trade that will send second-year forward Kessler Edwards to Sacramento, The Athletic
BROOKLYN, NY・15 HOURS AGO
Sportsnaut

After a whirlwind few weeks that featured all kinds of rumors about Sean Payton, the head coach has landed with
DENVER, CO・11 HOURS AGO
Larry Brown Sports

Patrick Mahomes might need to ask for a little forgiveness from his wife. Mahomes spoke with the media on Monday during Super Bowl Opening Night ahead of Sunday’s big game between his Kansas City Chiefs and the Philadelphia Eagles. The Chiefs quarterback was asked about his Valentine’s Day plans considering the holiday is on February... The post Patrick Mahomes might be in trouble with his wife over 1 comment appeared first on Larry Brown Sports.
KANSAS CITY, MO・16 HOURS AGO
Sportsnaut

Phoenix Suns star guard and future Hall of Famer Chris Paul is the ultimate professional. He’s not one to create
PHOENIX, AZ・1 DAY AGO
Sportsnaut

Following the Kyrie Irving trade on Sunday, it seems that the momentum behind a Kevin Durant trade next is increasing
BROOKLYN, NY・2 DAYS AGO
Sportsnaut

The Brooklyn Nets were one-half of the biggest trade so far this season, and it looks very likely that the
BROOKLYN, NY・2 DAYS AGO
Sportsnaut

The Kansas City Chiefs are set to play in their fifth Super Bowl on Sunday and their third since 2019.
KANSAS CITY, MO・1 DAY AGO
Sportsnaut

Dallas Cowboys tight end Dalton Schultz emerged as one of the best weapons on the team this past season, playing
DALLAS, TX・21 HOURS AGO
Sportsnaut

Tom Brady states he will not start his broadcasting career with FOX Sports until the fall of 2024 after speaking to network executives last week.
OREGON STATE・1 DAY AGO
Sportsnaut

The Sacramento Kings currently sit third in the Western Conference, ascending the NBA standings and in a position to end
SACRAMENTO, CA・2 DAYS AGO
Sportsnaut

Labor Secretary Marty Walsh is leaving the Biden administration to become the new executive director of the NHL Players’ Association,
15 HOURS AGO
Sportsnaut

While the Detroit Lions ultimately missed the playoffs, it’s hard to consider their 2022 season as anything less than a
DETROIT, MI・2 DAYS AGO
Sportsnaut

As the Green Bay Packers await a decision from quarterback Aaron Rodgers regarding his intentions to retire or play in
GREEN BAY, WI・23 HOURS AGO