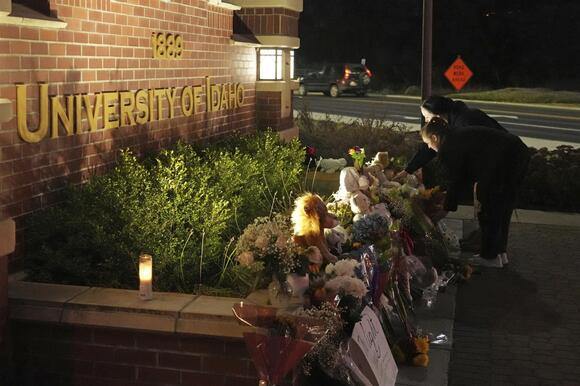 T he father of one of the University of Idaho students murdered in their home last month shared his theory about the murderer 's target based on their movements once they got in the house.

Steven Goncalves, who is the father of the late Kaylee Goncalves, noted that the murderer's entry point on the middle floor and only going upstairs leads him to believe it may have been intentional.

"I'm not a professional, so I want to specify that, but they've said the entry point was the slider or the window. It was the middle floor. So to me, he doesn't have to go upstairs. His entry and exit are available without having to go upstairs or downstairs. Looks like he probably may have not gone downstairs. We don't know that for sure, but he obviously went upstairs. So I'm using logic that he chose to go up there when he didn't have to," Goncalves said on Fox News's Fox and Friends on Sunday.

Goncalves would not definitely say if he believes his daughter or any roommates were directly targeted in the attack. He also said he has confidence that law enforcement are doing all they can to solve the murders despite closely guarding details of the investigation.

Ethan Chapin, 20, Xana Kernodle, 20, Madison Mogen, 21, and Goncalves, 21, were slain in their beds in Moscow, Idaho, on Nov. 13. The four roommates, who lived on the middle and upper floors, were all stabbed with a large knife in the chest and upper body, per local authorities.

The two surviving roommates who lived on the lower floor, Dylan Mortensen, 19, and Bethany Funke, 19, recently spoke out for the first time, saying how much they missed their roommates and detailed the difficult time they were having processing the murders they slept through.

No suspect or motive has been named in the case yet, and other details about the murders have been sparse as police continue to investigate the deaths of the four students.

I saw something today that was very compelling. one of the people cleared left the country, with his wealthy parents (after the parents supported his alibi). He was also seen in the video at the food truck. he's an avid hunter, and lived one minute from their house. he owns the same style hunting knives and can be seen in one of his social media posts. he is a student, and I find it to be odd that he would just fly out of the country to Africa while he's a full time student. his parents are both doctors and vouched for his whereabouts. very compelling evidence confirming everything I just said. I left his and his family name out of this, but I'm certain the FBI are already all over this.

I think they need to re look at the roommates. Why would a person who killed 4 spare 2. Why did the roommate's have people come over to call 911? The roommate who gave the speech at the vigil sounds like she was jealous of the other girls. Just saying things don't add up. I am a parent and grandparent and I just feel that there are too many gaps. Prayers for the families who lost their children 🙏 😢 💔

I think whoever did it has been in their home before. I think he or she knew the layout of the house so they knew what window to go in and right up to the bedrooms. I believe it was personal. Extreme jealousy is a possible motive. God knows who did it and with faith He will lead the cops in the right direction.