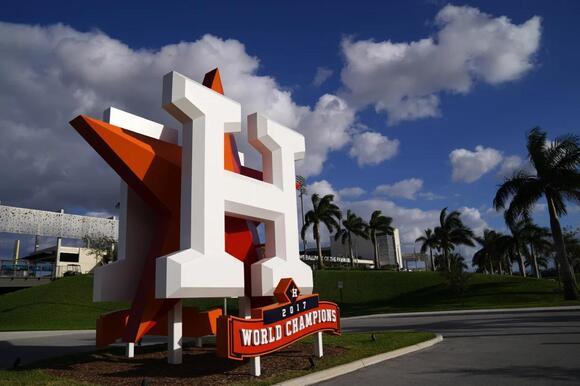 As the MLB Winter Meetings begin on Monday, the Houston Astros are reportedly in active pursuit of another All-Star hitting to strengthen their lineup after winning the World Series.

Houston, one of the best teams in MLB over the last six seasons, is prepared to lose ace Justin Verlander in free agency. With the top starter in their rotation expected to join another World Series contender, the Astros are ramping up their efforts to build one of the best lineups in baseball for the 2023 season.

During the 2022 regular season, Houston’s lineup finished ranked eighth in runs scored (737), ranked seventh in OPS (.743) and 12th in batting average (.248). However, a majority of the damage was done by the first six in the batting order, with the bottom of the lineup providing little consistency.

Facing the inevitability of its pitching staff taking a step back in 2023, Houston seems intent on adding multiple impact bats to counter the losses.

According to Bob Nightengale of USA Today , the Astros are in talks with Andrew Benintendi even after adding All-Star first baseman Jose Abreu.

Benintendi, a 2022 All-Star selection, excelled this season with the Kansas City Royals. Before the MLB trade deadline, the corner outfielder posted a .320/.387/.398 slash line with 40 runs scored in a Royals’ uniform.

While the left-handed hitter only posted a .254 batting average after being traded to the New York Yankees, he delivered a .331 OBP with four steals and a 111 wRC+ in 27 games. The 28-year-old suffered a broken hamate bone late in the regular season, but he will be ready for spring training.

Facing the possibility of losing Michael Brantley, the Astros want to shore up their lineup with a consistent on-base threat who could produce additional run-scoring chances with his speed. Benintendi offers both of those things and he also has World Series experience.

It’s unlikely the Astros would be willing to sign Benintendi to anything longer than a three-year contract, based on their history and desire for long-term payroll flexibility. One thing that is clear, though, is ownership has given the front office the green light to keep adding talent this winter.

Houston is also in the mix to add a catcher, pursuing several of the top options in both free agency and the trade market. It’s also possible they look to add depth to their starting rotation before 2023.

World Series odds 2023: Who will win the World Series? Every team’s future odds

The 2023 MLB season is just around the corner and that means there are World Series odds to evaluate. A
1 DAY AGO
Sportsnaut

After swinging a trade for Rui Hachimura this week, the Los Angeles Lakers may still not be done wheeling and
LOS ANGELES, CA・1 DAY AGO
Sportsnaut

The Chicago Bulls could be active before this year’s NBA trade deadline, however, the players they move may not be
CHICAGO, IL・2 DAYS AGO
Sportsnaut

One top NFL Draft expert firmly believes the Houston Texans will do everything in their power to try and move
HOUSTON, TX・1 DAY AGO
BasketballNetwork.net

Kenny Smith details just how miserable the culture of the Sacramento Kings was, having spent 3 years with them
SACRAMENTO, CA・1 DAY AGO
OnlyHomers

Tragic news has struck the world of professional wrestling with the word that one of wrestling's biggest stars has lost his life at the age of 38. Celebrity entertainment outlet TMZ, which is known for breaking the news of many deaths of famous people around the world, broke the news of the death of legendary wrestler Jay Briscoe, who has tragically died in a car crash at the age of 38.
2 DAYS AGO
Sportsnaut

Dallas Mavericks linked to D’Angelo Russell trade: How it might look

The Dallas Mavericks find themselves as the sixth seed in the Western Conference and struggling to remain above .500 despite
DALLAS, TX・2 DAYS AGO
Sportsnaut

Future Hall of Fame point guard Chris Paul is in the back end of his career. The Phoenix Suns star
PHOENIX, AZ・3 HOURS AGO
Sportsnaut

The MLB All-Star Game is one of the best traditions in sports, with the best players in Major League Baseball
TEXAS STATE・1 DAY AGO
Sportsnaut

The New York Knicks might have put up their signature win of the 2022-23 season on the road against the
BOSTON, MA・2 DAYS AGO
Sportsnaut

The NHL All-Star Game is taking place on Feb. 4, 2023, at FLA Live Arena, in Sunrise, Florida, with the
SUNRISE, FL・1 DAY AGO
Sportsnaut

The NBA levied $25,000 fines on two of the game’s superstars Friday over separate incidents that occurred in their Wednesday
2 DAYS AGO
Sportsnaut

The head referee in the Lakers’ 125-121 overtime loss to the host Boston Celtics on Saturday admitted that Los Angeles
LOS ANGELES, CA・8 HOURS AGO
Sportsnaut

The New York Giants are likely to retain starting quarterback Daniel Jones in the offseason. However, if long-term contract talks
ALABAMA STATE・4 HOURS AGO
Sportsnaut

The Washington Wizards and the San Antonio Spurs will square off Monday in the Alamo City in a battle of
SAN ANTONIO, TX・2 HOURS AGO
Sportsnaut

Two teams that have positioned themselves to make rare playoff appearances hope to continue to rise at the other’s expense
SACRAMENTO, CA・3 HOURS AGO