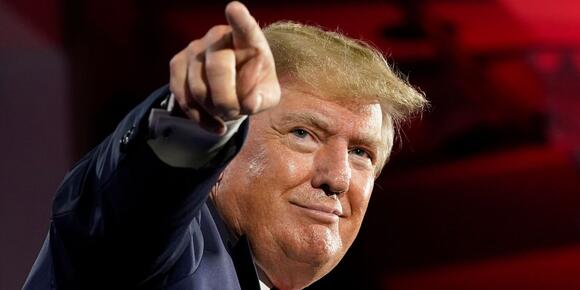 Donald Trump failed to disclose a $19.8 million loan from a company with ties to North Korea while he was president, Forbes reported Sunday, citing documents uncovered by the New York attorney general’s office.

Trump owed the money to L/P Daewoo while he was campaigning in 2016 and into his presidency, according to records. He didn’t list the debt in financial disclosure filings, as candidates and presidents are expected to do, Forbes reported.

The loan was paid off just over five months into his presidency. Forbes said the documents don’t specify who satisfied it.

Daewoo is a South Korean conglomerate that partnered with Trump on a development project near the United Nations headquarters in New York City and on several other projects over the years. The company has ties to North Korea, Forbes reported, and was the only South Korean company allowed to operate a business in North Korea in the mid-1990s.

Trump may have skirted disclosure laws and not committed an outright violation because the loan was on the books of his company, the Trump Organization, and not identified as a personal loan, Forbes noted.

The debt would have sparked conflict of interest concerns over an American president’s indebtedness to a foreign operation vulnerable to influence by North Korea’s rogue government. Trump often gushed about his close relationship with North Korean leader Kim Jong Un .

Such loans are largely reported on an honor system because the U.S. Office of Government Ethics has neither the resources nor the power to delve into a president’s assets.

“If someone does not disclose a loan, OGE has no way to know,” said Walter Shaub , who ran that agency when Trump took office.

Don Fox, who once also headed the office, told Forbes: “The system is kind of predicated upon people actually following a law because they want to follow the law.”

Check out the Forbes article here .

How much classified information did it take to pay off that loan? Did Trump sell Kim information about missile design that helped North Korea develop their new intercontinental ballistic missiles?

😤 He is getting away with way too much!! Stop him and put him in prison already!! How many years can he keep up his criminal activity?!?! 🤮

Sen. Ted Cruz (R-Texas) shared his views on why it was difficult for members of the Republican Party to have an opposing view with former U.S. President Donald Trump in an interview at the 2022 Texas Tribune Festival, held in September. What Happened: Trump is a "unique" character, according to...
TEXAS STATE・1 DAY AGO
HuffPost

There are several reasons that this document drama happened: There are too many people with classified access and entirely too many documents to keep up with.
FLORIDA STATE・1 DAY AGO
HuffPost

S.E. Cupp explained why it may spell “very bad news” for the GOP.
FLORIDA STATE・1 DAY AGO
HuffPost

The conservative attorney pointed out the "huge difference" between the Donald Trump, Mike Pence and Joe Biden discoveries of sensitive materials.
1 DAY AGO
Newsweek

The hammer assault has led to unfounded conspiracy theories about former Speaker Nancy Pelosi's husband, and any footage may in time be manipulated.
WASHINGTON, CA・1 DAY AGO
Business Insider

Trump, who referred to Putin as a "genius" the week Russia invaded Ukraine, was once impeached over his dealings with Kyiv.
1 DAY AGO
Newsweek

The U.S. announced Wednesday that it would be sending 31 Abrams tanks to Ukraine one day after Germany said it would send its Leopard 2 tanks.
2 DAYS AGO
HuffPost

Members of the Senate Intelligence Committee are upset after the administration declined to share sensitive files found in Trump's and Biden's records.
INDIANA STATE・1 DAY AGO
HuffPost

The right-wing network had a new meltdown over nothing.
1 DAY AGO
HuffPost

The administration has finalized its reversal of a Trump-era rule that gutted protections across 9 million acres of Alaska's Tongass National Forest.
ALASKA STATE・2 DAYS AGO
HuffPost

"Why should we let it become Cuba?" the Fox News host said after suggesting America launch an attack to "liberate" Canada.
11 HOURS AGO
HuffPost

"Let's just let him play with fire again," the attorney said of the company's decision to let the former president back on its social media platforms.
23 HOURS AGO
HuffPost

The Fox News personality got into it with the host and Pete Hegseth over AR-15-style rifle ownership.
CALIFORNIA STATE・2 DAYS AGO
HuffPost

A top Republican and conservative media hosts have been leveling baseless claims against an obscure former Biden official who is Asian American.
5 HOURS AGO
HuffPost

The parent company of Facebook and Instagram on Wednesday announced it would restore the former president's accounts following a two-year suspension.
1 DAY AGO
HuffPost

The Texas senator is cool with classified documents at Mike Pence's house but not so fine with the ones found at Joe Biden's.
INDIANA STATE・2 DAYS AGO