‘This is a new era’: Governor Hochul announces projects to revitalize Downtown Rochester 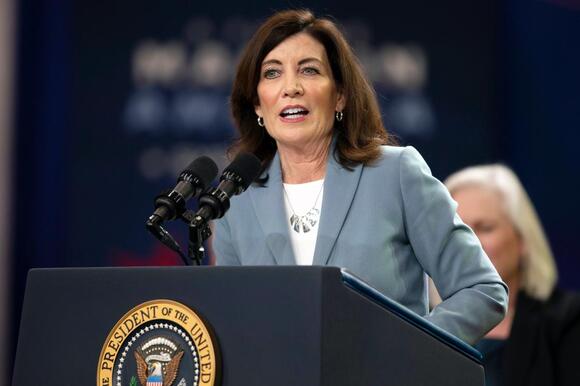 ROCHESTER, N.Y. (WROC) — Governor Hochul was in Rochester Monday morning to discuss plans to revitalize Downtown Rochester. The conference was held at the Joseph A. Floreano Rochester Riverside Convention Center.

State officials describe the Downtown Revitalization Initative as a program to turn downtown neighborhoods into centers for redevelopment, business, job creation, and economic and housing diversity.

“We know this program works because who knows better than local communities what should be invested in,” Rodriguez said.

“In the middle of the city, you cannot have a big donut hole,” said Mayor Malik Evans. “We must make sure it’s filled in, but not filled in with anything, but filled in with things that will allow our city to be able to connect to the rest of the great things that we have going on.”

Hochul then went on to announce five awards to revitalize the area. The first award for $4 million will go towards redeveloping buildings on East Main Street and Clinton Avenue to introduce commercial and affordable housing units.

The fourth award for over $1 million will go towards the Alta Vista building to transform four vacant lots into a six-story, mixed-use building — including housing units and supportive housing for domestic abuse victims.

The final award for over $1 million will go towards demolishing a one-story building and installing a new commons to increase walkability in the area.

“You will go by here, you will feel and experience the difference, people will notice it,” said Governor Hochul. “This is a new era, this is a new beginning. I’m really excited because my heart is in this community and I can’t wait to see what a revitalized Rochester revival looks like.”

Because of her, many essential workers cannot work, because they refuse to take the vaccine,and (mark of the beast). Only a fool will sell their soul to work on the American industrialized enslavement complex.

She better get the crime under control first , if not their won’t be any residents or guests coming to Rochester

Does this broad realize that there are places within Rochester outside of the city and other areas within the state that have issues she should address? 🙄

ROCHESTER, N.Y. (WROC) — RG&E and NYSEG customers frustrated about prolonged billing issues were able to air their frustrations in a public forum at Rochester City Hall Tuesday afternoon. A second public forum will be held at the same place from 6:00 p.m. to 8:00 p.m. The forums are part of a New York State […]
ROCHESTER, NY・19 HOURS AGO
News 8 WROC

Steven Shortino opened iSmash in 2018, after a friend of his showed him a video of people smashing things, and offered it as a business model.
HENRIETTA, NY・20 HOURS AGO
News 8 WROC

ROCHESTER, N.Y. (WROC) — Road salt hasn’t been seen often this winter due to a lack of snow and cold, and for area waterways that could be the best news they’ve had all winter. Salt used to melt ice has continued to grow in popularity since the 1970s, and now more are becoming aware that […]
ROCHESTER, NY・1 HOUR AGO
News 8 WROC

ROCHESTER, N.Y. (WROC) — Marie Cinti has stepped down from her role as Penfield Town Supervisor, the town announced Tuesday. Currently, Deputy Town Supervisor Debbie Drawe will oversee the day-to-day operations until another supervisor is chosen. “I made this decision on my own a few weeks ago; there are simply not enough hours in the […]
PENFIELD, NY・1 DAY AGO
News 8 WROC

Officials behind the program are hoping it will usher in change, not just for youth in the community, but for generations to come.
ROCHESTER, NY・3 HOURS AGO
News 8 WROC

The six tactical flight officers will undergo four weeks of training before heading to their respective stations.
ROCHESTER, NY・21 HOURS AGO
News 8 WROC

ROCHESTER, N.Y. (WROC) — The Arc Ontario received $25,000 in funding to upgrade its production operations at Finger Lakes Bottling Company. Organizers say the money will help streamline the already established bottling operation to increase competitive employment for individuals with disabilities. The COO of Enterprise Operations for Arc Ontario says this will further enable those […]
ONTARIO, NY・19 HOURS AGO
News 8 WROC

ROCHESTER, N.Y. (WROC) — For the first time since the beginning of the pandemic East High School held its Youth and Community Fair in person. In the past the event had to be held virtually as the COVID pandemic limited their abilities to host in-person gatherings. Event organizers say over 30 employers made it to […]
ROCHESTER, NY・13 HOURS AGO
News 8 WROC

Rising Storm Brewing Company at the Mill, is targeted to open by the end of April.
PENFIELD, NY・1 DAY AGO
News 8 WROC

The donated items will be sent out by the end of the day on Friday.
MONROE COUNTY, NY・4 HOURS AGO
News 8 WROC

Stay up to date on the latest headlines in today's Sunrise Smart Start for Wednesday, February 8, 2023.
GREECE, NY・6 HOURS AGO
News 8 WROC

ROCHESTER, N.Y. (WROC) — The EquiCenter in Honeoye Falls is set to receive a $100,000 grant from the American Legion to support programming for veterans. Staff first began offering services to vets in 2008 and have since developed a full range of experiences. They add they believe the interaction between people and horses offers key […]
HONEOYE FALLS, NY・44 MINUTES AGO
News 8 WROC

The George Eastman Theatre said that the statue has gained popularity with those who visit the museum.
ROCHESTER, NY・1 DAY AGO
News 8 WROC

ROCHESTER, N.Y. (WROC) — Tuesday morning, parents educators, specialists and advocates from communities across the state, including Rochester, will travel to Albany to fight for funding for early intervention services. These are federally mandated supports, where children have a right to get access to these services within 30-days, however families are having to wait upwards […]
ROCHESTER, NY・1 DAY AGO
News 8 WROC

CHILI, N.Y. (WROC) — The Rochester Region has an estimated 4,000 people from Turkey or who have Turkish origin —many of them with family and friends in the Near East. Nihat Selcuk is the President of the Turkish Society of Rochester. He says right now, the death toll keeps climbing. It doesn’t look good. The silence […]
ROCHESTER, NY・1 DAY AGO
News 8 WROC

RG&E responds to calls to make the company a public utility, cites it as a ‘political agenda’

This response comes months after the New York State Department of Public Service expanded its investigation into NYSEG and RG&E.
ROCHESTER, NY・2 DAYS AGO
News 8 WROC

ROCHESTER, N.Y. (WROC) — Today John Kucko took his camera to Sodus Bay, where he got a good look at how to safely set up for ice fishing.
ROCHESTER, NY・15 HOURS AGO
News 8 WROC

ROCHESTER, N.Y. (WROC) — Many RG&E and NYSEG customers who have been dealing with billing issues will be able to express their frustrations at a public forum at Rochester City Hall Tuesday, from 1:00 p.m. to 3:00 p.m. and 6:00 p.m. to 8:00 p.m. at the City Hall Chambers. This following the New York State […]
ROCHESTER, NY・1 DAY AGO