Gunman at large after man found shot at hotel on International Drive in Orlando, police say 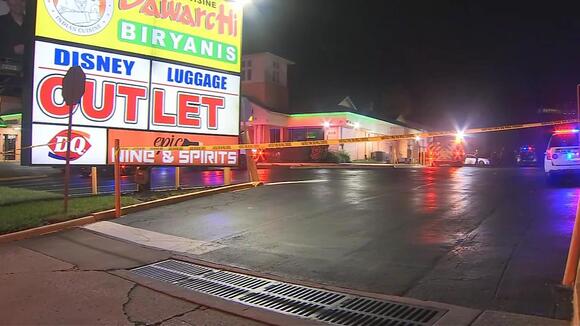 ORLANDO, Fla. — Police in Orlando responded to an early morning shooting at a hotel.

Officers responded around 4:40 a.m. to the Floridian Express hotel on International Drive.

Several officers were working an active crime scene at the hotel.

Police said a man was possibly shot in an area of the hotel by an unknown suspect.

Channel 9 has a crew working to gather more details and will provide updates on Eyewitness News.

Police: Man arrested after being seen walking near West Melbourne school with rifle

WEST MELBOURNE, Fla. — Police in West Melbourne said they worked to secure a school after reports of a man walking around with a rifle. Officers were called to search for a man with a gun near Pineapple Cove Classical Academy on Tuesday. The incident caused great concern and...
WEST MELBOURNE, FL・1 DAY AGO
WFTV Channel 9 Orlando

MAITLAND, Fla. — One person was arrested after a robbery in Maitland Tuesday afternoon, police said. It happened near Lake Lilly Park. A Maitland police officer saw the suspect driving near the area and attempted to stop their vehicle, but the vehicle fled, according to a news release. The...
MAITLAND, FL・1 DAY AGO
WFTV Channel 9 Orlando

MELBOURNE BEACH. Fla. — The man involved in an armed standoff with Brevard County deputies near Melbourne Beach Wednesday afternoon was found dead inside the home. Brevard Sheriff Wayne Ivey said deputies were in the process of serving a drug warrant when a man armed with a shotgun opened fire on deputies.
BREVARD COUNTY, FL・1 DAY AGO
WFTV Channel 9 Orlando

ORLANDO, Fla. — Fire crews are responding to reports of a fire at an Orlando apartment complex Thursday morning. The Orlando Fire department responded to the Avalon Condominiums on South Semoran Boulevard near Pershing Avenue just after 11:30 a.m. See map of location below:. Callers told 911 dispatchers they...
ORLANDO, FL・4 HOURS AGO
WFTV Channel 9 Orlando

ORANGE COUNTY, Fla. — The woman accused of killing an innocent mother during a shooting spree has a history of violent attacks against her neighbors, who reported it to deputies, 9 Investigates has learned. >>> STREAM CHANNEL 9 EYEWITNESS NEWS LIVE <<<. Angila Baxter was arrested earlier this month...
ORANGE COUNTY, FL・1 DAY AGO
WFTV Channel 9 Orlando

OSCEOLA COUNTY, Fla. — Deputies are investigating a shooting that happened Sunday in Osceola County. The Osceola Sheriff’s Office responded to Peppermill Circle in Kissimmee in response to a shooting call. >>> STREAM CHANNEL 9 EYEWITNESS NEWS LIVE <<<. When deputies arrived, they found the victim with a...
KISSIMMEE, FL・2 DAYS AGO
WFTV Channel 9 Orlando

ORLANDO, Fla. — (AP) — The plan had been in the works for weeks: Ellen Gilland, 76, would fatally shoot her terminally ill, 77-year-old husband, Jerry, and then kill herself. But after shooting him in the head in an 11th-floor hospital room, she couldn’t carry through with the rest.
DAYTONA BEACH, FL・2 DAYS AGO
WFTV Channel 9 Orlando

DELTONA, Fla. — Deputies in Volusia County are looking for a man after a car was stolen with a passenger inside. Officials said a customer at High Spirits Smoke Shop on Fort Smith Boulevard had his vehicle stolen last Thursday and his girlfriend was sitting in the passenger seat.
VOLUSIA COUNTY, FL・2 DAYS AGO
WFTV Channel 9 Orlando

Affidavit: Longwood man who set his condo on fire after getting upset with HOA charged with arson

LONGWOOD, Fla. — A Seminole County man upset with his homeowner’s association intentionally set fire to his condo, according to an arrest affidavit. Officials said they were called to the scene of a residential fire at 264 Crown Oaks Way near Longwood on Jan 14. When investigators arrived...
LONGWOOD, FL・2 DAYS AGO
WFTV Channel 9 Orlando

ORLANDO, Fla. — A local nonprofit now has a sixth home to help recently released felons transition back into society. S&D Enterprises opened a men-only home in the Parramore neighborhood near Orange Blossom Trail. The CEO told Channel 9 that the house was abandoned and used by squatters and...
ORLANDO, FL・5 HOURS AGO
WFTV Channel 9 Orlando

ORANGE COUNTY, Fla. — Channel 9 has obtained newly released records that provide more information about the hit-and-run crash that killed a 60-year-old husband and father. In early December, a BMW was heading the wrong direction on State Road 520 when it struck the Paulo Carvalho’s motorcycle head-on, killing him.
ORANGE COUNTY, FL・2 DAYS AGO
WFTV Channel 9 Orlando

ORLANDO, Fla. — Editor’s note: This story is available as a result of a content partnership between WFTV and the Orlando Business Journal. Jeremiah’s Italian Ice, Another Broken Egg and Island Fin Poke are among the Orlando-based eateries that plan to grow their presence here and across the U.S. in 2023.
ORLANDO, FL・5 HOURS AGO
WFTV Channel 9 Orlando

9 things to know about the disappearance of Jennifer Kesse

ORLANDO, Fla. — Tuesday marks 17 years since Jennifer Kesse disappeared in Orlando. Her family has vowed to never give up their search to find her. The Orlando Police Department originally investigated the case. In December, WFTV reported that cold case detectives with the Florida Department of Law Enforcement...
ORLANDO, FL・2 DAYS AGO
WFTV Channel 9 Orlando

A Florida real estate broker is accused of selling properties that did not belong to him, authorities said. Michael Bogsted, 37, of Plant City, was arrested on Tuesday and charged with one count of scheme to defraud, according to Hillsborough County Sheriff’s Office online booking records. According to a...
PLANT CITY, FL・16 HOURS AGO
WFTV Channel 9 Orlando

ORLANDO, Fla. — Editor’s note: This story is available as a result of a content partnership between WFTV and the Orlando Business Journal. Public bus agency Lynx’s board of directors will decide soon on whether to keep its interim CEO or search for a successor. The organization...
ORLANDO, FL・5 HOURS AGO
WFTV Channel 9 Orlando

EATONVILLE, Fla. — The mayor of Eatonville now says the water system has finally passed all state-level requirements. This means for the first time in several years, residents can now safely use, drink and shower with their running water. The mayor made the announcement Wednesday in a letter to...
EATONVILLE, FL・7 HOURS AGO
WFTV Channel 9 Orlando

APOPKA, Fla. — City of Apopka council members are moving along with their proposal to annex the historically Black area of South Apopka, reuniting two communities separated decades ago by segregation. The two sides gathered at a community center in South Apopka for a workshop Tuesday afternoon, their second...
APOPKA, FL・1 DAY AGO