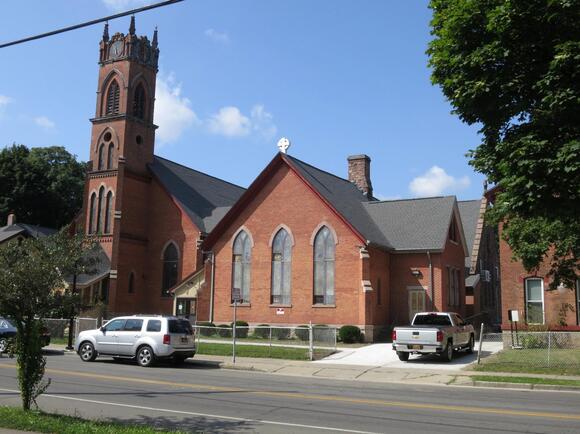 ROCHESTER, N.Y. (WROC) —The remains of the Seventh-day Adventist Church on Jefferson Avenue are scheduled to be torn down this week after the historic building was destroyed in a fire on Christmas almost one year ago.

People who live off Jefferson Ave. are heartbroken to hear this news because this Church was highly active in the community and always gave back. But leaders concluded rebuilding was too expensive, so their only option was to move.

For over 150 years, the building structure where the Seventh Day Adventist church met has stood giving the surrounding neighborhood a historic look. Neighbors were heartbroken to hear it would all be torn down.

“Programs went on there as well like healthcare,” Polly Archie, who lives off Jefferson Ave. told us. “I was a part of that, the healthcare program they teach about your heart and whatever was going on at that time they taught a class. It’s a big loss to the community.”

“They always took care of the property, they were good neighbors,” neighbor Melvin Chatman added. “They invited some of the neighbors a couple times of the year. They were always real friendly.”

Senior Pastor Hanson Drysdale explained the decision to tear down what was left and relocate was not easy, but they did not have enough funds to rebuild off Jefferson Ave.

“It was much more than what we got from the proceeds in our insurance coverage,” Pastor Drysdale said. “So, we looked also at buying land and rebuild from scratch. That too was cost prohibitive.”

After discussions with his congregation, Pastor Hanson found out the Parkminster Church off Chili Ave. was selling the property and agreed to close a deal with them to permanently move there.

“We have a lot of members who live out on this side,” Pastor Drysdale continued. “It’s just a 10-minute drive from our Jefferson Ave. location. So, it doesn’t pose such great of a problem. Most of the members believe it was an ideal location.”

Despite moving, the church still plans to keep its community house open to feed the homeless and give out clothes along Jefferson.

The Pastor added, “We were called to serve that community, and the community misses our presence there So, we want to remain there even though we have a new property, and we have a new church, we will be doing some sort of ministry at Jefferson Ave.”

Right now, The Seventh Day Adventist Church still meets at 36 King St. while they do renovations and move stuff into the new Chili Ave. location. They expect to hold gatherings there by late Spring next year.

Those who live off Jefferson hope the property is turned into something the whole neighborhood can benefit from. It has still not been determined what caused the fire.

The Geneva Police Department is asking for information related to a shooting that occurred Sunday morning on Seneca St.
GENEVA, NY・4 HOURS AGO
News 8 WROC

If you lose heat or if there's someone in need of assistance, call 311.
ROCHESTER, NY・2 DAYS AGO
News 8 WROC

Al Sharpton to speak at funeral for Franklin Florence

ROCHESTER, N.Y. (WROC) — Nationally-known civil rights activist Al Sharpton will be coming to Rochester to speak at Reverend Franklin Florence’s funeral service next Friday. Florence was a community leader and staunch advocate for civil rights. He is the creator of FIGHTON, the nation’s first Black-run community development corporation, founded in partnership with Xerox in 1969. […]
ROCHESTER, NY・14 HOURS AGO
News 8 WROC

ROCHESTER, N.Y. (WROC) — The 37th annual Lakeside Winter Celebration attracted about 2,000 people Saturday. Even with temperatures at zero, Jim Farr, the Chairman of the Ontario Beach Park Committee said those folks all braved the chills, wind, and ice for the following:  “We had a whole bunch of stuff: horse-drawn carriage rides, wine, and […]
ROCHESTER, NY・18 HOURS AGO
News 8 WROC

ROCHESTER, N.Y. (WROC) — Mayor Malik Evans and the City of Rochester announced on Friday the start of the of “R-Connect” Community Resource and Employment Fairs. The program will start on February 8, and is a series of community resource and employment fairs by the City’s Department of Recreation and Human Services where residents can […]
ROCHESTER, NY・1 DAY AGO
News 8 WROC

The two-story expansion adds a new admissions area connected to the parking garage, a food court, and a handful of new exhibits, including a new home of the World Video Game Hall of Fame.
ROCHESTER, NY・2 DAYS AGO
News 8 WROC

ROCHESTER, N.Y. (WROC) — Fire crews in Gates battled a house fire on Lyell Road in single-digit temperatures Friday night. The call came in around 8:00 p.m. The road was closed as crews worked to put the fire out. Firefighters at the scene did not provide any information about any potential injuries, or a cause […]
GATES, NY・1 DAY AGO
News 8 WROC

Funds raised help Al Sigl continue to support all of its six agencies from around the Rochester area — serving 55,000 children, adults, and their families.
ROCHESTER, NY・3 DAYS AGO
News 8 WROC

ROCHESTER, N.Y. (WROC) — For those who work outdoors in the winter, it can be especially challenging to ‘beat the cold.’ News 8 caught up with some outdoor workers Friday, to find out how they try to keep warm in frigid conditions.  Car mechanics and auto shop workers might be some of the busiest workers […]
ROCHESTER, NY・1 DAY AGO
News 8 WROC

Shelters open to the public amid cold temperatures

Shelters like Open Door Mission and House of Mercy are open to the public amid cold temperatures to ensure everyone stays warm.
ROCHESTER, NY・1 DAY AGO
News 8 WROC

Stay up to date on the latest headlines in today's Sunrise Smart Start for Friday, February 3, 2023.
MONROE COUNTY, NY・2 DAYS AGO
News 8 WROC

ROCHESTER, N.Y. (WROC) — With an ongoing federal lawsuit, the Rochester region and surrounding parts across the state are still prohibited from opening recreational cannabis dispensaries. Back in November, the state’s cannabis control board approved 36 CAURD licenses to allow eligible businesses statewide to start selling marijuana on the market legally. For many applicants, including […]
ROCHESTER, NY・2 DAYS AGO
News 8 WROC

ROCHESTER, N.Y. (WROC) — Members of Daniel Prude’s family and other organizations against police brutality came together in Rochester tonight for a vigil to honor Tyre Nichols, while also calling for changes in police training, tactics, and funding.  The gathering took place at MLK Park where Daniel Prude’s older brother Joe and other activists gave […]
ROCHESTER, NY・3 DAYS AGO
News 8 WROC

ROCHESTER, N.Y. (WROC) — A rollover accident involving a large truck occurred on the Veterans Memorial Bridge Friday morning. A News 8 crew says that the vehicle involved in the accident appeared to be some type of dump truck. According to authorities, on the westbound side, the right lane was blocked from traffic due to […]
ROCHESTER, NY・2 DAYS AGO
News 8 WROC

ROCHESTER, N.Y. (WROC) — With frigid temperatures continuing in the forecast for Saturday, schools and businesses have begun to announce their afternoon and evening closures for Friday. Click here for an updated list of closings and cancellations.
ROCHESTER, NY・2 DAYS AGO
News 8 WROC

Macedon police chief: ‘I battle demons like many veterans’

ROCHESTER, N.Y. (WROC) — Macedon’s police chief released a statement Thursday addressing the incident that led to his decision to go on voluntary unpaid leave. That incident happening on December 10th of last year. Chief Fabian Rivera said in his statement that he takes full responsibility for his actions that day — actions he says […]
MACEDON, NY・2 DAYS AGO
News 8 WROC

ROCHESTER, N.Y. (WROC) – UPDATE: Family of 78 year-old Christine Cannon came forward Thursday evening, according to Van Stanley, who is organizing her memorial. Cannon lost her life in a house fire on Hancock Street, when investigators originally reported no known next of kin. Stanley told News 8 the family members knew her by another […]
ROCHESTER, NY・2 DAYS AGO