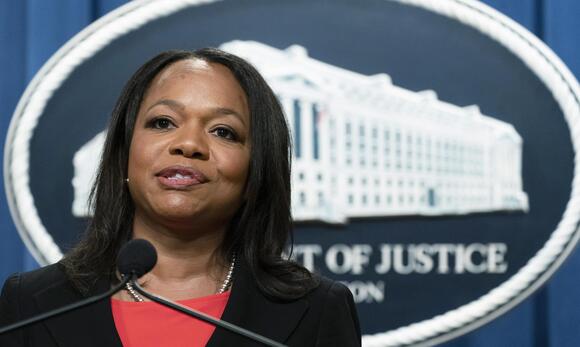 A Mississippi man pleaded guilty in federal court to burning a cross in his front yard with the intent to intimidate a Black family, the US justice department said .

Axel Cox, 24, of Gulfport in south Mississippi, mounted a wooden cross in his front yard on 2 December 2020, officials said. He then doused it with motor oil and lit it within view of his neighbors, who are Black.

The justice department said Cox “admitted that he burned the cross because of the victims’ race and because they were occupying a home next to his”.

“The Department of Justice will continue to prosecute those who use racially-motivated violence to drive people away from their homes or communities.”

Cox admitted to violating the Fair Housing Act, according to court documents. He is scheduled to be sentenced on 9 March 2023 and faces a maximum penalty of 10 years in prison, a fine of up to $250,000, or both.

“Individuals in our communities should be free from threats and intimidation,” said Luis Quesada, assistant director of the FBI Criminal Investigative Division.

“The FBI and our law enforcement partners will continue to bring to justice anyone who violates the federal laws designed to ensure civil rights are protected.”

Intentionally ignoring, diverting from and attempting to excuse Racism, is Racism. How much you wanna bet that we are going to see multiple ppl doing just that, in this comment section....

When I think we as a society have moved forward some idiot does this. Those on the fringes need to stop stoking rascism. These individuals need to be held accountable of their own despotic behavior/actions.

Still ignorant@24. It doesn't matter where you move to. You'll still be there. You're the issue. Where you lead, you will follow. Unless you change to adapt and acceptance of all whom have done nothing to you. Your miserable self will always find something to complain about. When in reality, it's you who's the common denominator. The same in every different picture frame... Cause it's always you there each time.

County Henrico in Virginia One man determined that performing his job duties as a police officer for Henrico County, Virginia, was insufficient. The county officer stopped his squad car when he noticed a driver in need, and he did something unexpected for Chy-Niece Thacker.
HENRICO COUNTY, VA・12 DAYS AGO
Anthony James

The welfare of the children is of utmost importance, and as parents, it is our duty to ensure that they are protected and have access to the care they need to grow and thrive. Unfortunately, in some cases, parents do not always provide this level of care and protection. This was the case for a 9-year-old girl who arrived at a local hospital pregnant.
2 DAYS AGO
BuzzFeed News

Jason Lewis, a DC Parks and Recreation employee, is facing one count of second-degree murder in connection with the Jan. 7 killing of 13-year-old Karon Blake.
WASHINGTON, DC・1 DAY AGO
CNN

Three bodies found Thursday in the Detroit area are believed to be those of three rappers missing for almost two weeks, a municipal spokesperson said.
DETROIT, MI・10 HOURS AGO
NBC News

An investigation is underway after a 28-year-old Ohio man died Tuesday, a day after he was shot by police who believed he was a burglary suspect, as, his family says, he was cleaning out his late grandmother's home. Joe Frasure was shot at early Monday in Wyoming, a city of...
WYOMING, OH・1 DAY AGO
USA TODAY

Parents in Germany thought they discovered their daughter's dead body but police say their daughter is a murder suspect in her doppelganger's death.
MICHIGAN STATE・2 DAYS AGO
The Guardian

A senior Russian lieutenant who fled after serving in Ukraine has described how his country’s troops tortured prisoners of war and threatened some with rape. Konstantin Yefremov left Russia in December after spending three months in the parts of the southern Zaporizhzhia oblast that were occupied in Vladimir Putin’s invasion of Ukraine.
21 HOURS AGO
The Guardian

The enemy on the other side of the woods can be heard when the wind blows towards the deep Ukrainian trenches. Russian voices carry in the freezing cold air as do the growls of the tanks and the buzz of the kamikaze and reconnaissance drones. But that is not all...
2 DAYS AGO
The Guardian

When I was a child, and friends asked me what I would do if I ever met my dad, I always replied that if I had a gun I would shoot him. I was a young teen in a small east Yorkshire market town with, at best, minor connections to a burgeoning petty criminal underworld. Even if I had been able to get a gun, I would have been more likely to shoot off a finger in error than aim correctly at my absent father. It was an empty threat that clearly revealed a deep, simmering anger.
2 DAYS AGO
Anita Durairaj

"Feeling judged": A 24-year-old black woman marries an 85-year-old white man who is 13 years older than her grandpa

A married couple from Starkville, Mississippi has been receiving media attention due to their unusual relationship. The interracial couple, Charles and Miracle Pogue met at a laundromat in Starkville in 2019. Charles is a retired real-estate agent while Miracle is a nurse. They were friends first and then their relationship became romantic.
STARKVILLE, MS・3 HOURS AGO
The Guardian

An unwelcome and unwanted relationship cannot be imposed, supreme court rules
2 DAYS AGO
The Guardian

A Labour MP has said she has been “bombarded” with rape and death threats after speaking out against the “toxic” influence Andrew Tate had over schoolboys. Alex Davies-Jones received abuse over email and directly to her office, soon after she raised the issue at prime minister’s question’s earlier this month. At the time, the shadow technology minister told MPs: “Teachers are now having to develop their own resources to re-educate boys who are being brainwashed online by his deeply toxic messaging.”
2 DAYS AGO
The Guardian

Western supplies of Leopards and Challengers have made the news, but the biggest donor is the enemy
2 HOURS AGO