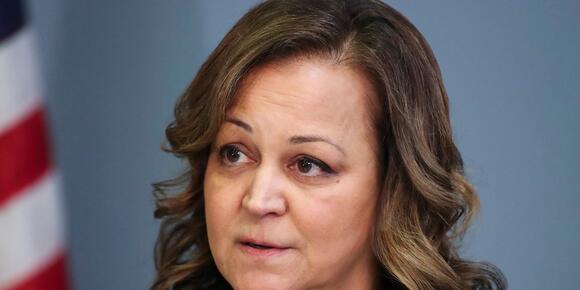 Tampa Police Chief Mary O’Connor has been placed on administrative leave following a traffic stop where she flashed her badge to a Florida county sheriff’s deputy in November, the city’s mayor Jane Castor announced Friday.

Community members are criticizing O’Connor, who was picked for the role in February, after she told the deputy about her position and that she was hoping they’d “just let” her and her husband Keith go from the traffic stop, the Tampa Bay Times reported .

Body camera footage shows Pinellas County sheriff’s deputy Larry Jacoby asking the two why they were driving in a golf cart without a license plate before she showed the deputy her badge.

She later handed over a business card to the deputy and said “you ever need anything, call me.”

The deputy later let the pair go without handing them a ticket.

You can watch a clip of the stop below.

O’Connor will be on leave as the city awaits the results of an investigation into the stop, according to Castor.

Assistant Chief Lee Bercaw will fill O’Connor’s role and serve as acting chief in the meantime.

O’Connor, who apologized to Castor and Tampa residents, said her handling of the matter could be viewed as “inappropriate.”

“I knew my conversation was on video, and my motive was not to put the deputy in an uncomfortable position,” said O’Connor in a news release associated with the leave announcement.

“I have personally called the Pinellas County Sheriff offering to pay for any potential citation.”

“But if it’s in your law-enforcement family, they don’t see and say something,” Lewis said. “They see something and close their mouths and walk away.”

Castor said that the city’s holds “everyone accountable, no matter their position, and this behavior was unacceptable” and added that O’Connor “will go through the due process and face appropriate discipline.”

“You’re worried that if you teach Black history, someone might get offended," one Florida librarian told HuffPost of Florida's culture wars.
SARASOTA COUNTY, FL・3 HOURS AGO