Dog rescued after it was spotted being dragged by truck in Apple Valley, neighbors say 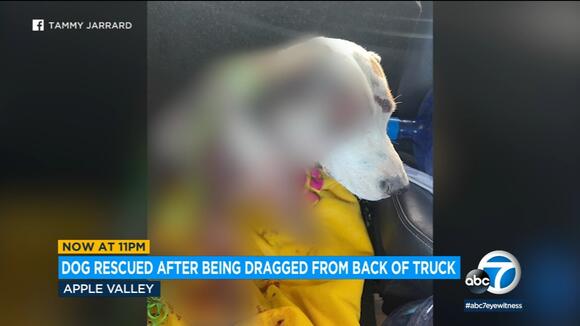 Residents in Apple Valley are outraged after a dog that was reportedly tied to a truck was dragged down a road. Tammy Jarrard spoke with Eyewitness News on Saturday and said she was taking her daughter to school on Friday when she came across a driver on the side of Milpas Road trying to tell her something. "She was on the phone with 911 and she said, 'Please watch out. There's a Tahoe that just went by and the person was dragging a dog behind the vehicle,'" recalled Jarrard. Jarrard said she continued driving and as she approached Desert View Road, she came across a woman and the reported Tahoe. She said the woman was untying the dog. "She was just out of her mind," Jarrard told ABC7. "She was clearly out of her mind, and I don't know if she was on drugs or mentally ill, but she was just basically saying, 'Somebody must have tied that dog to my bumper. I don't even know what it's doing there. You want a dog? There, you got a dog. Take the dog.'" That's when Jarrard said she decided to take photos of the dog and the Tahoe. The dog's injuries were so horrific, portions of photos had to be blurred. With the help of another good Samaritan, Jarrard wrapped the dog in a blanket and took it to an animal shelter. The dog is now in the care of a veterinarian. As of Sunday evening, there's no word on how the dog is doing, but neighbors have started collecting donations to help pay the veterinarian bills. The San Bernardino County Sheriff's Office told ABC7 the county's animal control office was notified and responded to this report. It's unclear if an official investigation into the woman who was seen with the dog is underway.

Hopeful for his full recovery...Hope there is a follow-up to this story as someone is accountable for tying the dog to the vehicle...the only person who knows the full story is the woman who was dragging the dog...

A homeowner was shot at while confronting thieves near Victorville, and the terrifying moments were caught on video.
VICTORVILLE, CA・2 HOURS AGO
ABC7

A restaurant run by the family of a Riverside County sheriff's deputy who was killed in the line of duty reopened to hundreds of supporters from around the community.
MURRIETA, CA・1 DAY AGO
ABC7

Police are seeking the public's help in identifying the man who brought a human jawbone into a San Bernardino station and left it there.
SAN BERNARDINO, CA・1 HOUR AGO
ABC7

"We want some peace of mind." An Inland Empire family has been waiting five years for the trial of the man accused of killing a 37-year-old mother.
RIVERSIDE, CA・17 HOURS AGO
ABC7

Burglars were caught on video while robbing several businesses at Brookside Plaza, a Redlands shopping center that had previously been targeted.
REDLANDS, CA・2 DAYS AGO
ABC7

A 70-year-old woman was hospitalized in serious condition after being struck by a hit-and-run driver in San Marino, authorities said.
SAN MARINO, CA・2 DAYS AGO
ABC7

Ten-year-old Anthony Avalos looked dead when authorities were called to his Lancaster home in 2018, but his mother didn't appear to be very upset, witnesses testified in the murder trial.
LANCASTER, CA・3 DAYS AGO
ABC7

Prosecutors played a recording of Heather Barron's first interview with detectives, which was the same day 10-year-old Anthony Avalos was rushed to the hospital in June 2018: "They keep on looking at me like ... if I hurt him, and I didn't."
LANCASTER, CA・2 DAYS AGO
ABC7

Many Southern California residents were left stunned when they saw their most recent SoCalGas bill, but it was even more shocking for business owners.
PASADENA, CA・1 DAY AGO
ABC7

Security surveillance camera images of Andrew Alan Hernandez inside the Capitol Building on the day of the insurrection showed him carrying an American flag with a Go-Pro camera zip-tied to the pole.
JURUPA VALLEY, CA・3 DAYS AGO
ABC7

Bed Bath & Beyond to close 6 more stores in SoCal

Bed Bath & Beyond will be closing six stores in Southern California and nearly 90 more across the country.
LOS ANGELES, CA・2 DAYS AGO
ABC7

One of the bills would increase the penalties for serial thieves and another would reinstate a mandatory 20-year minimum sentence for anyone convicted of using a firearm during a violent crime.
CALIFORNIA STATE・3 DAYS AGO
ABC7

Yelp released its top 100 places to eat in America, and a brick-and-mortar empanada shop in Monrovia made it on the list.
MONROVIA, CA・2 DAYS AGO
ABC7

A ticket with five numbers in the Powerball lottery drawing was sold at a Fontana gas station-convenience store and is worth $3,987,249.
FONTANA, CA・3 DAYS AGO