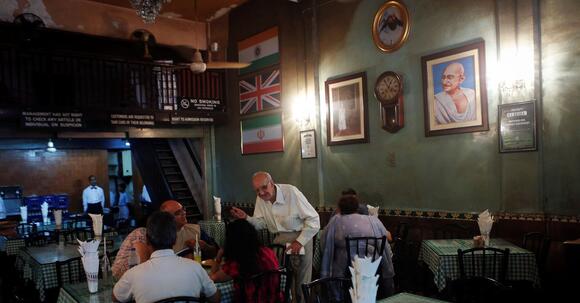 BENGALURU, Dec 5 (Reuters) - India's services activity grew at its quickest pace in three months in November on strong demand, lifting optimism to its highest in eight years, according to a business survey, which also showed prices rose at the fastest rate since July 2017.

The S&P Global India services purchasing managers' index (INPMIS=ECI) rose to 56.4 in November from 55.1 in October, beating the 55.4 estimate in a Reuters poll.

It remained above the 50-mark separating growth from contraction for a 16th straight month, its longest stretch of expansion since October 2016.

However, growth is widely expected to slow in the coming quarters as high-interest rates hamper economic activity.

The PMI showed overseas demand expanded for the first time since the pandemic started, an encouraging sign given slowing global growth has already started to hurt exports, which fell 17% over a year ago in October.

Strong demand boosted business confidence to its highest since January 2015.

However, elevated input prices forced firms to raise prices charged at the sharpest rate in about five-and-a-half years.

That could put further pressure on overall inflation, which eased to a three-month low of 6.77% in October but remained above the Reserve Bank of India's tolerance limit.

"Evidence of stubborn inflation may prompt further hikes to the policy rate at a time when global economic challenges could negatively impact on India's growth," added De Lima.

The RBI, which has already raised its key interest rates by 190 basis points since May, will hike the repo rate by a smaller 35 basis points to 6.25% on Wednesday and to a peak of 6.50% by end-March, according to a Reuters poll.

Stronger expansion in services activity alongside better-than-expected manufacturing growth boosted the composite index to a three-month high of 56.7 in November from 55.5 in October.

BRUSSELS, Jan 30 (Reuters) - Euro zone economic sentiment rose to a seven-month high in January on more optimism across all sectors except construction, with inflation expectations among consumers and companies both sharply down, data showed on Monday.
1 HOUR AGO
Reuters

BERLIN, Jan 30 (Reuters) - The German economy unexpectedly shrank in the fourth quarter, data showed on Monday, a sign that Europe's largest economy may be entering a much-predicted recession, though likely a shallower one than originally feared.
3 HOURS AGO
Reuters

TAIPEI, Jan 30 (Reuters) - Taiwan's export orders likely contracted again in December and at a faster clip than the previous month, a Reuters poll showed on Monday, as global demand for the island's technology-related goods continues to cool.
9 HOURS AGO
Reuters

MADRID (Reuters) -Spain’s consumer prices rose 5.8% year-on-year in January, the first increase in six months, according to preliminary data on Monday from the National Statistics Institute (INE), which attributed the rise to higher fuel prices.
3 HOURS AGO
msn.com

The global oil market remains tight according to Saudi Aramco, the largest oil producer in the world. And that does not bode well for a world that still relies heavily on fossil fuels. Disclaimer: We adhere to strict standards of editorial integrity to help you make decisions with confidence. All...
2 DAYS AGO
Reuters

Jan 30 (Reuters) - U.S. central bankers have unambiguously telegraphed this week's policy decision: a quarter-of-a-percentage-point increase in their benchmark interest rate, the smallest since they kicked off their tightening cycle 10 months ago with one the same size.
1 HOUR AGO
Reuters

Nasdaq leads drop in futures ahead of Fed rate decision

Jan 30 (Reuters) - Nasdaq led declines in U.S. futures on Monday, dropping more than 1%, with growth stocks falling at the start of a week packed with central bank rate decisions and earnings from several high-profile companies.
38 MINUTES AGO
Reuters

BEIJING, Jan 30 (Reuters) - China's factory activity in January is expected to have contracted more slowly than in December, a Reuters poll showed on Monday, with production hampered as workers continued to fall sick after the government dismantled its "zero-COVID" regime."
6 HOURS AGO
Reuters

HOUSTON, Jan 30 (Reuters) - Venezuela's state oil firm PDVSA is toughening terms for buyers after a month-long halt to most exports of crude and fuel, demanding prepayment ahead of loadings in either cash, goods or services, company documents showed.
1 HOUR AGO
Reuters

AMSTERDAM, Jan 27 (Reuters) - The Netherlands' Prime Minister Mark Rutte said on Friday that it is not clear whether his government will disclose the result of ongoing talks with the U.S. over new export restrictions for the semiconductor industry.
2 DAYS AGO
Reuters

SYDNEY, Jan 30 (Reuters) - Australia is preparing for the arrival of thousands of Chinese students, the education minister said on Monday, days after China's education ministry warned students enrolled overseas that online learning would no longer be recognised.
6 HOURS AGO
Reuters

GENEVA, Jan 30 (Reuters) - The world is "dangerously unprepared" for future pandemics, the International Federation of the Red Cross and Red Crescent Societies (IFRC) say in a report published on Monday, calling on countries to update their preparedness plans by year-end.
1 HOUR AGO
Business Insider

I flew on Singapore's Airbus A380 for 12 hours in economy from Germany to Singapore. The seat was surprisingly amenity-heavy and made the long trek easy.

I had more than enough space, but the seat's generous pitch and width should be comfortable for even larger passengers.
1 DAY AGO
Reuters

Jan 30 (Reuters) - European shares fell on Monday, as cautious investors anticipated a slew of interest rate hikes by prominent central banks this week, with shares of rate-sensitive sectors including technology among the major laggards.
2 HOURS AGO
Reuters

The mouse that roared: New Zealand and the world's 2% inflation target

WELLINGTON, New Zealand, Jan 30 (Reuters) - More than 30 years ago, some relatively youthful central bank and Treasury economists in New Zealand were grappling with how to bring two decades of double-digit inflation under control in an economy less than 1% the size of its U.S. counterpart.
2 HOURS AGO
Reuters

WHO maintains highest alert over COVID, but sees hope ahead

Jan 30 (Reuters) - The World Health Organization (WHO) said on Monday that COVID-19 continues to constitute a public health emergency of international concern, its highest form of alert.
1 HOUR AGO
Reuters

WASHINGTON/FRANKFURT/LONDON, Jan 30 (Reuters) - Top central bankers, who credit the use of a 2% inflation target with anchoring decades of stable prices, are facing the first full-on test of how well that approach to monetary policy works once prices have erupted, and how strictly they'll enforce it if damage to their economies intensifies.
7 HOURS AGO