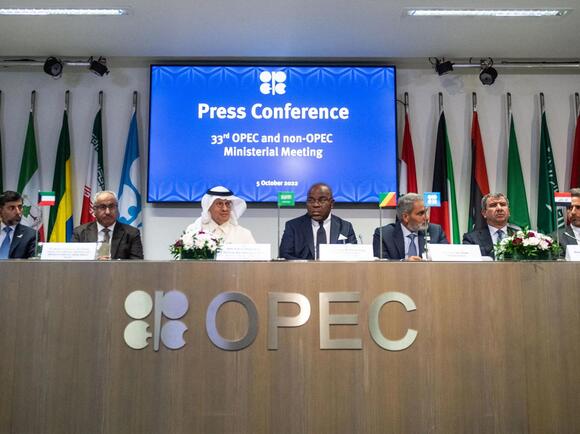 Oil futures rose Monday, thanks to good news on the demand and supply side: OPEC will be sticking to its production cut target and China is softening its Covid-zero stance, which has sparked hopes of an outsized demand.

OPEC+, or the Organization of the Petroleum Exporting Countries and its allies — including Russia — said on Sunday they would stick to the oil production target the group set in October: to slash output by 2 million barrels per day from November through to end-2023.

The production cut is equivalent to about 2% of the world's demand, and is the largest reduction since the outbreak of COVID-19.

Back in October, OPEC+ had said that the decision was made "in light of the uncertainty that surrounds the global economic and oil market outlooks." The move angered the US, and the White House accused the OPEC+ of "aligning with Russia." That's because tighter oil supply typically drives up prices, which may help prop up Russia's war chest, despite sanctions and boycotts over its invasion of Ukraine.

On Sunday, the OPEC said the move was "purely driven by market considerations."

Hopes of China's economic reopening from the pandemic are also boosting market sentiment.

The events "point to the beginning of the end of zero-COVID" in China, although they do not point to a quick reopening for the entire country, Nomura economists said in a note on Monday. But there's certainly optimism surrounding the relaxation of COVID restrictions, Vishnu Varathan, Mizuho Bank's head of economics and strategy, wrote in a Monday note.

OPEC's decision came two days after the European Union and the G7 agreed on a $60 a barrel price cap for Russian crude oil — a move that creates uncertainty in the oil markets.

Prices could jump to $120 a barrel next year if Russia cannot find enough "dark ships" — vessels that turn off tracking devices — to export crude covertly, analysts at Bernstein estimate. The price limit on Russian crude takes effect on Monday.

However, Kremlin spokesman Dmitry Peskov said Moscow will not accept the price cap and has made "certain preparations" to counter the move, TASS state news agency reported on Friday.

An intentional fuel shortage engineered by this Rogue Obiden administration!

Russia will sell 160.2 billion rubles ($2.3 billion) worth of foreign currency from February 7 to March 6, roughly triple from the prior month.
3 DAYS AGO
Markets Insider

Oil giant Shell says it will spend $4 billion buying back shares, as it reports its highest ever annual profit

The oil giant made its biggest annual profit ever last year as its natural-gas business boomed, thanks to sky-high energy prices.
4 DAYS AGO
Markets Insider

Fuel made from Russian crude is being funneled into New York by Indian oil refiners, according to data from Kpler. New York is purchasing 89,000 barrels a day of gasoline and diesel from India, the most in about four years. India has been one of Russia's top crude customers since...
NEW YORK STATE・3 DAYS AGO
Markets Insider

China's yuan will end US dollar dominance and create a bipolar currency system in the next decade, says 'Dr. Doom' Nouriel Roubini

The Chinese yuan poses a threat to US dollar dominance, according to Nouriel Roubini. He predicted in a Financial Times column the emergence of a bipolar currency regime. "The intensifying geopolitical contest between Washington and Beijing will inevitably be felt in a bipolar global reserve currency regime as well." The...
WASHINGTON STATE・1 HOUR AGO
Markets Insider

OPEC+ may need to lift its oil output given signs China's reopening could deliver a strong boost to demand, IEA chief says

OPEC+ may need to lift oil output as Chinese demand is shaping up for a strong comeback, the IEA's chief said. The Paris-based IEA expects half of this year's global oil demand growth to come from China, he said. There are already signs Chinese oil demand is recovering as Beijing...
6 HOURS AGO
Markets Insider

The stellar jobs report on Friday could be bad news for stocks and the economy, Jeremy Siegel said. The Fed may keep hiking interest rates to keep inflation in check, the Wharton professor warned. Siegel still expects the Dow Jones Industrial Average to climb 18% to 40,000 points by 2025.
9 HOURS AGO
Markets Insider

The stock market rally will peak in the next 2 weeks before stalling out, as disinflation proves transitory, Bank of America says

The stock market is poised to peak in the next two weeks as inflation makes a comeback, according to Bank of America. The bank said investors should fade the S&P 500 as it approaches the 4,200 level. "Bear risk still disinflation proves 'transitory' and/or 'no landing' flips to 'hard landing,"...
3 DAYS AGO
Markets Insider

Billionaire investor Ray Dalio doubled down on his faith in cash, saying it's currently more attractive than stocks and bonds. "Cash used to be trashy. Cash is pretty attractive now," the Bridgewater founder said. Higher interest rates translate into tight money supply in the economy, offering some returns on the...
3 DAYS AGO
Business Insider

"Hard power is a reality," US Army Gen. Christopher Cavoli said in January. "If the other guy shows up with a tank, you better have a tank."
20 HOURS AGO
Deseret News

Risk-on sentiment returned to the stock market on Thursday after the Fed acknowledged inflation is falling. Fed Chairman Jerome Powell mentioned the word "disinflation" 13 times during Wednesday's FOMC speech. Beaten down stocks like Carvana and Bed Bath & Beyond soared as interest rates fell in Thursday's session. A risk-on...
4 DAYS AGO
Markets Insider

A jury found investors failed to prove Elon Musk derailed them with his tweet that he had "funding secured" to take Tesla private, per the WSJ. The outcome vindicated Musk, who had argued that he didn't believe his tweet influenced Tesla's stock price. Tesla investors had alleged that his public...
2 DAYS AGO
Markets Insider

Mohamed El-Erian said markets are embracing a "soft landing scenario" as the US two-year bond yields fell. The yield drop followed the Federal Reserve's latest communique on inflation and interest rates on Wednesday. Investors are optimistic the Fed will soften its rate policy, raising the odds of a mild economic...
3 DAYS AGO
coinchapter.com

The US Government ordered the Pentagon to destroy the alleged Chinese spy balloon. The US Air Force shot down the balloon with a single missile as it drifted over the Atlantic Ocean. China hit back at the decision, threatening a strong retaliation. YEREVAN (CoinChapter.com) — Over the last few days,...
MONTANA STATE・1 DAY AGO
Markets Insider

Elon Musk, Michael Burry, and Jeremy Grantham warn stocks may slump and the economy could suffer. Here are 5 experts' warnings of what lies ahead.

Experts are sounding the alarm on stocks and the economy as rising interest rates heap pressure on asset prices and demand.
2 DAYS AGO
Markets Insider

The US stock market could face collapse by 2050, according to new research by a Finnish economist. That's because US stock growth is unsustainable, and a crash is bound to happen in the coming decades. The findings of the study mirror recent commentary from Wall Street legends, who are warning...
2 DAYS AGO
Markets Insider

China stocks and ETFs drop after the US shoots down suspected spy balloon, raising tensions between the economic superpowers

Chinese stocks fell after the US military this weekend shot down a suspected Chinese spy balloon. China claimed the balloon was for research purposes. Stocks fell in Shanghai, Hong Kong, and New York. The "damage has been done on the geopolitical front," says BDSwiss. Chinese stocks listed in both the...
1 HOUR AGO
Markets Insider

Jobs numbers are so high that the Fed won't support stocks by cutting rates until 2024, Goldman Sachs chief economist says

Friday's jobs report showed the US economy added 517,000 payrolls last month, more than twice the number predicted by analysts. That boom gives the Federal Reserve more scope to hike and hold interest rates high, according to Goldman Sachs' chief economist. "We do expect the Fed to do more than...
7 HOURS AGO
Business Insider

Nicknamed Hunter, he told Rest of World that working at the Foxconn factory in Zhengzhou, China felt like he was stripped of his "rights and dignity."
2 DAYS AGO
Markets Insider

Bridgewater Associates founder Ray Dalio warned of a looming currency crisis. "We are in a world where money as we know it is in jeopardy," Dalio told CNBC. "We are printing too much, and it's not just the United States." He added that a best option for a digital currency...
4 DAYS AGO