2 shot at Billings casino during robbery 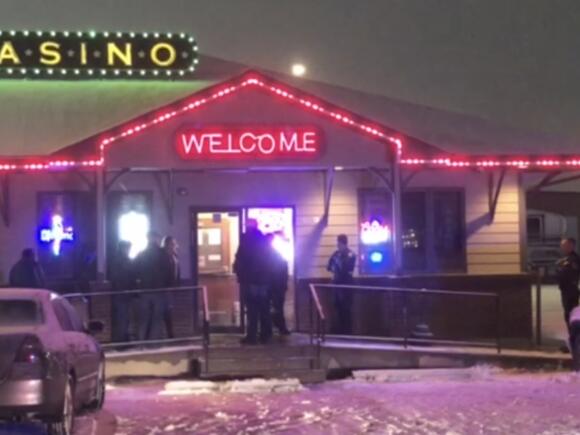 BILLINGS - Billings Police Sgt. Benjamin Beck says the call of a robbery and shooting came in at 8:43 p.m. Sunday. Two people were shot at the Treasure Cove Casino - an employee and a customer, both with non-life-threatening injuries.

Officers were working on suspect information. No other information was released.

This is a developing story. Check back for updates.

MTN talked to several witnesses present at the Treasure Cove Casino who say an employee was shot during an armed robbery.

Billings police on the scene could not confirm details of the incident.

This article has corrected the name of the casino to Treasure Cove Casino.

The crash on North 27th Street happened shortly before 10 a.m. when a car crashed into the Billings Gazette building.
BILLINGS, MT・2 DAYS AGO
Q2 News

The church's outdoor nativity scene was vandalized on Jan. 16--all items were destroyed--and Mary, Jesus, and Joseph statues were stolen.
BILLINGS, MT・4 DAYS AGO
Q2 News

On Jan. 13, surveillance captured a man forcing another man into a Mitsubishi Eclipse on Fourth Avenue South near the intersection of South 30th Street.
BILLINGS, MT・10 DAYS AGO
Q2 News

"I’m out of business, I don’t have any place to finish my furniture, display it, to have people come pick it up, nothing. I’m done until they get me a building to work out of."
BELFRY, MT・4 DAYS AGO
Q2 News

Sometime between Saturday December 3rd and Monday December 5th, Little was stabbed to death. His family is still searching for answers and the assailant is still on the run.
BILLINGS, MT・8 DAYS AGO
Q2 News

On July 15, a massive dust storm swept across I-90 near Hardin, causing blackout conditions and a 21-vehicle pile-up, which killed six people, including two children.
HARDIN, MT・5 DAYS AGO
Q2 News

“The doctors have said she probably wouldn’t be here now had we not jumped in, and she came to us,” said Renee.
RED LODGE, MT・14 HOURS AGO
Q2 News

The bridge was struck on Jan. 15--but this isn't the first time it was hit. And residents don't think it will be the last.
LAVINA, MT・2 DAYS AGO
Q2 News

Organized by the Montana District 3 VFW Auxiliary, the row of flags lining the cars was for troops to see out their window as they departed the airport to head overseas.
BILLINGS, MT・15 HOURS AGO
Q2 News

The bar was established in the 1940s and has seen a few owners in its time. Larry Falls Down is a regular at the popular location and can remember at least a few owners.
EDGAR, MT・2 DAYS AGO
Q2 News

For decades, churches across Montana have sheltered people experiencing homelessness, giving them a place to spend the night out of the cold.
BILLINGS, MT・6 DAYS AGO
Q2 News

The Petroleum Club charged, and continues to charge, a monthly fee for members to be able to dine at the restaurant.
BILLINGS, MT・3 DAYS AGO
Q2 News

Billings based Castlerock Excavating had their skid-steer stolen out of the Annafeld subdivision early Tuesday morning in a surprising crime that will put a hitch in the company's daily operations.
BILLINGS, MT・11 DAYS AGO
Q2 News

The two new stores would expand the footprint of the area's largest to seven stores in Billings and eight total in Yellowstone County.
BILLINGS, MT・4 DAYS AGO
Q2 News

Among the semifinalists is The Backporch BBQ restaurant in Roundup, which has landed a spot in the Best New Restaurant category.
ROUNDUP, MT・2 DAYS AGO