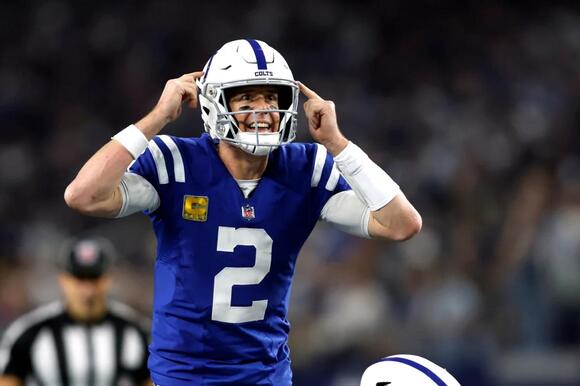 Veteran quarterback Matt Ryan and the Indianapolis Colts entered Sunday night’s game against the Dallas Cowboys at 4-7-1 and without much hope of climbing into the AFC Playoff race.

At least initially, it seemed as if Indianapolis came to play on national television. The team found itself up 10-3 after the first quarter and within 21-19 late in the third quarter.

That’s when everything changed for Ryan and Co. They committed four consecutive turnovers to open the fourth quarter, leading to four Cowboys touchdowns. In fact, Dallas scored three touchdowns within the first 5:14 of the final stanza. It then scored a fourth touchdown on an Ezekiel Elliott touchdown run following Ryan’s third interception of the game.

As you can see, Ryan was visibly frustrated following that last turnover. He just didn’t seem to have it at any point in Big D Sunday night.

If that weren’t enough, Ryan then lost a fumble on the Colts’ next possession — giving the Cowoys 33 unanswered points in the fourth quarter alone.

Jeff Saturday has been a feel-good story in Indianapolis after replacing the recently-fired Frank Reich as its head coach . But that changed on a dime as the Colts were absolutely humiliated for the entire NFL world to see Sunday evening in Dallas.

Indianapolis now founds itself at 4-8-1 and three games behind the New York Jets in the win column for the final AFC Wild Card spot. In short, this season is over for the Colts following a 54-19 loss to Dallas.

Time for the Indianapolis Colts to end the Matt Ryan era

It was back in Week 8 that Ryan found himself benched in favor of Sam Ehlinger . It was Reich’s final decision as the Colts’ head coach. Once he took over on an interim basis, Saturday opted to go back to Ryan under center.

Following a surprising Week 10 win over the Las Vegas Raiders, the Colts head into their Week 14 bye having lost three consecutive games. Sure close defeats at the hands of the Philadelphia Eagles and Pittsburgh Steelers heading into Sunday night painted this team in a good light. But what we saw in the fourth quarter against Dallas writes the remainder of this story.

It’s high time for the Indianapolis Colts to move off Ryan and go with Ehlinger for the remainder of the season. The idea here has to be to tank for the best possible pick in the 2023 NFL Draft . Saturday and Co. should also want to get a first-hand view of Ehlinger as a way to figure out whether he has a future on the roster.

Indianapolis can move off Ryan following the 2022 season while saving north of $17 million against the cap. The former NFL MVP has proven that he simply doesn’t have it any more. Continuing to start him would prove futile for the downtrodden Colts moving forward. It’s that simple.

The San Francisco 49ers lost the NFC Championship Game on Sunday after injuries forced them to use a fourth-string quarterback.
SAN FRANCISCO, CA・15 HOURS AGO
Sportsnaut

Entering the offseason, Sean Payton seemed like a sure bet to be hired as an NFL head coach again. Five
NEW ORLEANS, LA・1 DAY AGO
Sportsnaut

Eleven years after being let go by the Philadelphia Eagles, coach Andy Reid has his sights set on revenge, with
KANSAS CITY, MO・1 DAY AGO
Sportsnaut

NFL officials had a Championship Sunday to forget, with blown calls and questionable decisions that left the football world scratching
KANSAS CITY, MO・16 HOURS AGO
Sportsnaut

The New York Giants are likely to retain starting quarterback Daniel Jones in the offseason. However, if long-term contract talks
ALABAMA STATE・1 DAY AGO
Sportsnaut

One top NFL Draft expert firmly believes the Houston Texans will do everything in their power to try and move
HOUSTON, TX・2 DAYS AGO
Sportsnaut

The Indiana Pacers are quickly approaching the NBA’s trade deadline. And decision time has arrived on their direction for the
INDIANAPOLIS, IN・11 HOURS AGO
Sportsnaut

The Dallas Mavericks find themselves at a crossroads leading up to the Feb. 9 NBA trade deadline. Dallas heads into
DALLAS, TX・5 HOURS AGO
Sportsnaut

Blake Hinson scored 21 points, including the bucket that gave Pitt its first lead since midway through the first half,
ARIZONA STATE・2 DAYS AGO
Sportsnaut

The ACC released its schedule for the 2023 football season, which will mark the conference’s first season since doing away
GEORGIA STATE・4 HOURS AGO